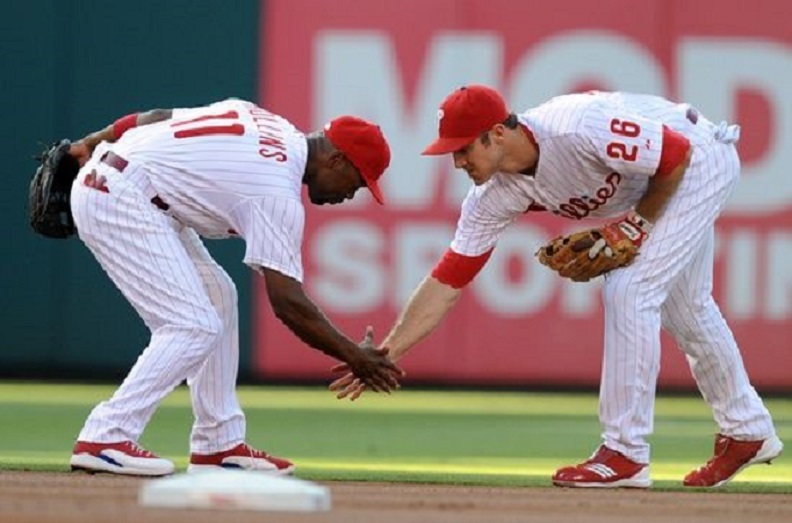 Despite the fact that this decade technically ends with the year 2020 and not the current year of 2019, many sources are using the turn from the 10’s to the 20’s as an excuse to pop out some “end of the decade” pieces and lists.

Who am I to buck that trend?

With that in mind, over the next few weeks, I am going to take a glance back at the 2010’s in Phillies baseball.

During these final weeks of 2019, I am going to examine how and why that happened. I am also going to present a few lists, including the best individual seasons and games from the last ten seasons.

The first look back today at the 2010’s is a list presenting the top Philadelphia Phillies players of the decade. Rather than make it a subjective list, I decided to consult the folks at Fangraphs.

Using their research tools, I came up with the top WAR figure accumulated by each position player and pitcher between the years 2010-19 while with the Phillies. Those players are presented here in order, from 10-1.

Herrera won a starting job with the Phillies out of spring training in 2015. He remained the starting center fielder with the team until his suspension at the end of this past May due to a scandalous domestic violence incident. Herrera slashed .276/.333/.423 and produced 60 home runs, 233 RBIs, 294 runs scored, and 56 stolen bases over 2,492 plate appearances. He was a 2016 National League All-Star.

Tied with Herrera in WAR, “The Flyin’ Hawaiian” was ranked higher here since he accumulated that WAR total over nearly 800 fewer plate appearances. He was the Phillies starting center fielder as the decade began, a position he held until being dealt away at the July 2012 trade deadline. Victorino slashed .267/.336/.433 with 44 home runs, 170 RBIs, 225 runs scored, and 77 stolen bases over 1,665 plate appearances with the club prior to his trade. He won a 2010 NL Gold Glove and was a 2011 NL All-Star, receiving NL MVP votes that season.

Hernandez has been the Phillies starting second baseman since August 2015, so the entirety of the second half of the decade. He made brief appearances in the two years prior as well. Hernandez has slashed .277/.352/.381 with 46 home runs, 253 RBIs, 407 runs scored, and 80 steals over 3,282 plate appearances during the decade. He scored more runs than any other Phillies player during the 2010’s.

The late ace pitcher is the lone Phillies Wall of Famer on this countdown, though he will undoubtedly be joined in that honor by a number of the others over time. “Doc” won 55 games with the club from 2010 through his injury-forced retirement in 2013. Across 103 starts he registered a 3.25 ERA, 1.119 WHIP, and allowed 649 hits over 702.2 innings with 622 strikeouts. Halladay was the 2010 NL Cy Young Award winner, the runner-up in 2011, and in both seasons was a National League All-Star and received NL MVP votes.

The new Phillies ace, Nola was the club’s first round pick at seventh overall in the 2014 MLB Draft. He debuted the following season, and became a 2018 NL All-Star during a season in which he finished third in NL Cy Young Award voting and received MVP votes as well. Nola has allowed 669 hits over 771.1 innings across 127 starts while striking out 826 opposition batters. He also has career 3.49 ERA and 1.172 WHIP marks to date.

Lee did not open the decade with the Phillies, having been dealt way to Seattle on the same day in December 2009 that Halladay was acquired. However, he returned as a free agent for the record-setting 2011 campaign and remained with the club until forced into retirement by injuries in 2014. He won 41 games with a 2.89 ERA and 1.085 WHIP, allowing 697 hits over 747.2 innings across 106 starts with 739 strikeouts during the decade. Lee finished third in the 2011 NL Cy Young Award voting and sixth in 2013 and was an NL All-Star in both seasons, also receiving NL MVP votes in 2011.

5 thoughts on “Top 10 Philadelphia Phillies players of the decade”