The writers at MLB Pipeline serve as the primary online resource for minor league prospect information and evaluation as presented by Major League Baseball.

In voting by their staff, outfielder Adam Haseley has been chosen as the Phillies Hitting Prospect of the Year and southpaw David Parkinson as the organizational Pitcher of the Year.

The 22-year-old Haseley is a lefty bat who was the Phillies first round pick at eighth overall in the 2017 MLB Amateur Draft out of the University of Virginia.

Parkinson will turn 23-years-old in mid-December and was the Phillies 12th round pick in that same 2017 MLB Amateur Draft out of the University of Mississippi.

“He learned to use it in and out of the strike zone, backdoor to a righty, back foot to a righty. He started to understand how to sequence it better. He’d use an elevated fastball off his curveball, and vice versa…David is very analytic and intelligent. He is advanced in game-planning and sequencing. His preparation is excellent. He has deception in his delivery. He knows his strengths and how they play against a hitter’s weakness. He’s never complacent and is always dedicated to finding a way to get better. The sky is the limit.”
The Phillies had previously honored Parkinson as one of their Paul Owens Award winners, which go to the top hitting and pitching prospects in the organization each year. Austin Listi captured the honors among position players. 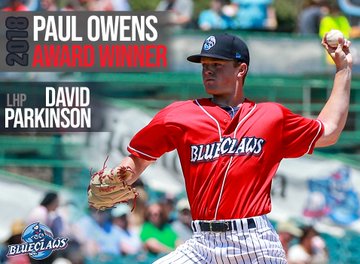 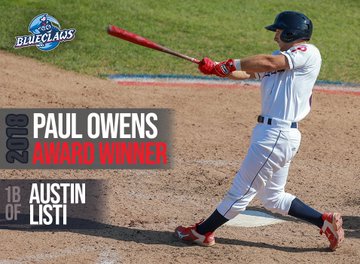 Twitter Ads info and privacy
In his reporting on the Pipeline honors, Todd Zolecki of MLB.com stated that he believes Haseley could work his way into the Phillies outfield mix as soon as the 2019 campaign.

“…as general manager Matt Klentak contemplates any roster moves this winter…Haseley will be in the back of his mind. He could join the big league roster sometime next season.”

MLB.com ranks Haseley at #4 among the Phillies top prospects with Parkinson at #19 on their list. Haseley was at #8 on Baseball America’s Midseason Phillies top prospects list.
In our own Phillies Top 20 Prospects rankings released back in early August, the Phillies Nation staff had Haseley at #3 and Parkinson as our #18-rated prospect in the organization.
In our rankings, two of our three staffers made 2018 top draftee Alec Bohm their #2 Phillies prospect. I was the lone evaluator to put Haseley ahead of Bohm. Here was my writeup:
“I’ll admit it, I’m the one guy who ranked Haseley ahead of Bohm. That was for two reasons. First, Bohm has just 73 professional plate appearances. Second, Haseley has really stepped up his game in his own first full season in pro ball. The Phillies first round pick at eighth overall a year ago out of the University of Virginia, Haseley doesn’t possess Bohm’s power. But he does have some developing pop, and is just as strong an offensive player in every other facet. A more pure defender out there, Haseley could end up at any of the three outfield spots. Already at Double-A Reading, Haseley has hit for a .307/.362/.432 slash with 30 extra-base hits and 68 runs scored over 448 plate appearances combined across two minor league levels this season. Whitaker believes that Haseley “does a little bit of everything on the field and could have an impact on the big club by Opening Day 2019.” While that might be a tad optimistic, it would not be unreasonable at all to think we could see Haseley debut at Citizens Bank Park at some point next season.”
Haseley is clearly on the rise. He will get an invitation to spring training when the Phillies return to Clearwater in February. Though he is likely to start the season at Reading, he should make it to Triple-A Lehigh Valley before the summer months, putting himself in line for a big-league promotion.
Though Parkinson is not as highly considered, he has two things going for him. He produced this season at a high level, and he is left-handed. With lefties always in demand, if he follows up this outstanding 2018 performance with another in 2019 you just might see Parkinson shoot up the evaluators prospect lists next season.
Originally published at Phillies Nation as “Adam Haseley, David Parkinson named Phillies Prospects of the Year by MLB Pipeline“