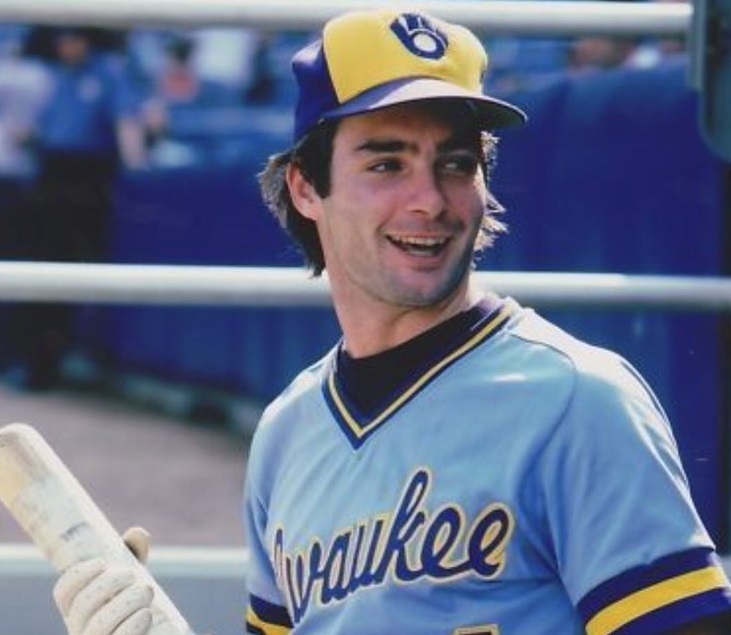 Paul Leo Molitor was taken by the Milwaukee Brewers, who were then still in the American League, as the third overall pick in the first round of the 1977 MLB Draft. Over the course of his 21 years in Major League Baseball, Molitor would become a first ballot Hall of Famer, elected in 2004 following a career in which he registered 3,319 hits and compiled a .306 lifetime batting average after more than 12,000 plate appearances.

It didn’t take long for Molitor to begin making his mark in Milwaukee. First-year manager George Bamberger penciled a then 20-year-old rookie into his Opening Day starting lineup as the leadoff man and shortstop less than ten months after being drafted. In his second plate appearance, Molitor singled off Baltimore Orioles pitcher Mike Flanagan to drive in a run and give the Brewers a 3-0 lead in a game they would eventually win by an 11-3 final score in front of more than 47,000 satisfied customers at County Stadium.

That base hit was the first of 142 that he would rap out in that 1978 campaign. Molitor played in 152 games, including making 87 starts at second base and 31 at shortstop and hit .273 with 30 stolen bases. He was a catalyst in helping the Brewers win 93 games just a year after losing 95. For that performance, Molitor finished as runner-up to Detroit second baseman Lou Whitaker in voting for the American League Rookie of the Year.

There would be no “sophomore slump” for Molitor the following year as he took over the everyday role at second base from day one. In 1979 he slashed .322/.372/.469, producing 188 hits including 16 triples. He scored 88 runs, stole 33 bases, and received AL MVP votes. It was the first of nine seasons in which Molitor was given consideration from the voters as the league’s Most Valuable Player.

In 1980, Molitor continued his outstanding production and was recognized with his first American League All-Star Game appearance. Joining him on the AL squad at the Midsummer Classic that year was his doubleplay partner, shortstop Robin Yount. A year older than Molitor, Yount had broken into the big-leagues as a teenager in 1974 and already had six seasons under his belt. But 1980 was Yount’s breakout into stardom.

Molitor and Yount would play 15 years together in Milwaukee from 1978-92. The pair combined for eight AL All-Star appearances, five Silver Slugger Awards, and five finishes among the Top 10 in AL MVP voting, with Yount winning that award in both 1982 and 1989. During their 15 years together, Yount hit .292 with 226 home runs and 211 stolen bases. Molitor hit .303 with 160 homers and 412 steals.

In 1981, the Brewers reached the postseason for the first time thanks in part to the strike-shortened, split-season format. They dropped a tough five-game ALDS to the New York Yankees but gained valuable experience.

With that experience under their belts, the Brew Crew bashed their way to the World Series the following year. In 1982, a slugging Milwaukee team nicknamed “Harvey’s Wallbangers” under skipper Harvey Kuenn would win 95 games to edge out Baltimore by a game for the AL East Division crown. In the ALCS, the Brewers fell behind the star-studded California Angels, dropping the first two games of a best-of-five series. The Brewers rallied to win the next two games to tie it up, then won a thrilling Game 5 by a 4-3 final score.

The 1982 World Series would be no less thrilling. But this time it would be Milwaukee as the victims of a comeback. The Brewers held a 3-2 lead in that Fall Classic over the Saint Louis Cardinals. But the Cards crushed the Brew Crew by 13-1 to even it up, then rallied from behind to win Game 7.

Molitor hit .316 in the ALCS with two homers, five RBIs, four runs scored, and a stolen base. In the World Series he hit .355 and produced 11 hits, second only to Yount’s 12 for Milwaukee. It would prove to be his final opportunity at postseason play in a Milwaukee uniform.

Over the next eight years, injuries and trips to the disabled list would become regular occurrences for Molitor. Unable to throw, he underwent elbow surgery in 1984, playing in just 13 games that season. He would also miss large chunks of 1986, 1987, and 1990. During that shortened 1987 campaign, Molitor ran off a streak of 39 consecutive games with a base hit, still the fifth-longest hitting streak in MLB history.

In 1992, Molitor was age 35. He hit .320 and was an AL All-Star for the second straight season and fifth time overall. He also helped Milwaukee to a 92-win season, the club finishing in second place, four games behind Baltimore. But despite all that history, despite being a tremendous fan favorite, and despite the team still being a contender, the small-market Brewers just could not afford him when Molitor reached free agency after that 1991 campaign.

The defending World Series champion Toronto Blue Jays could afford Molitor. They were also looking for someone to step in and replace Dave Winfield as their everyday Designated Hitter. Molitor fit that bill perfectly, and the Jays signed him to a three-year deal in excess of $12 million guaranteed dollars.

Molitor earned every penny of his big new free agent contract. In his first season with Toronto, he was an AL All-Star once again and slashed .332/.402/.509 with career highs of 22 homers and 111 RBIs. He also scored 121 runs, stole 22 bags, and led the AL with 211 runs scored. For that performance he finished as runner-up to Chicago’s Frank Thomas for the American League Most Valuable Player honors.

His performance also helped lead Toronto to their third straight AL East Division title and a second consecutive American League pennant. In defeating Thomas’ Chisox in six games in the ALCS, Molitor led the Jays’ explosive offense by hitting .391 with five RBIs and seven runs scored. His two-out, two-run triple in the top of the 9th inning of Game 6 in Chicago broke open a tight contest, giving Toronto breathing room of 6-2 in a game they would win by a 6-3 final score.

That victory moved the Blue Jays into position to defend their World Series crown in a faceoff with a tough underdog Philadelphia Phillies ball club. With the 1993 Fall Classic tied at a game apiece, Toronto exploded for 25 runs in the next two contests to take a commanding 3-1 lead. Much to their reputation, the Phillies still would not quit. Curt Schilling tossed a complete game shutout gem to win Game 5 by a 2-0 score in Philadelphia, sending the series back to Toronto with the Jays up 3-2.

Game 6 at SkyDome would prove to be not only epic, but also historic. The two clubs battled into the bottom of the 9th inning with the Phillies holding a 6-5 lead and looking to force a decisive Game 7. Rickey Henderson led off by drawing a walk against Philly closer Mitch Williams, and with one out, Molitor singled. That brought Joe Carter to the plate. Williams threw him a 2-2 slider that didn’t slide, and Carter ripped it out over the wall in left field for a three-run, walkoff, World Series-winning home run.

For his outstanding production over the course of that Fall Classic, Molitor was named the Most Valuable Player of the World Series. He had slashed .500/.571/1.000 with two homers, eight RBIs, 10 runs scored, a dozen hits, and a stolen base.

There would be no three-peat as Toronto went just 55-60 during the strike-halted 1994 season. Molitor was named as an AL All-Star for a fourth straight season, and for the final time. When baseball resumed in 1995, Molitor had reached age 38. He would hit just .270 in that final year of his Toronto contract, the lowest batting average he had registered since 1983.

A free agent once again following that 1995 campaign, Molitor decided to go home. He signed with his hometown Minnesota Twins on a three-year contract that guaranteed him nearly another $10 million. In his first season in front of those hometown fans, ‘Molly’ would lead the American League with 225 hits. He finished with a .331 batting average and was awarded his fourth and final Silver Slugger Award.

Minnesota finished with a losing record and in fourth place in each of his three years there. So, Molitor finally decided to retire at age 41 following the 1998 season.

In 1999, The Sporting News ranked Molitor at #99 on its list of 100 Greatest Baseball Players. In June of that year, Milwaukee retired his uniform number 4, and five years later Paul Molitor joined Yount as the only two players sporting the Brewers cap on their Hall of Fame plaques.

But that wasn’t it for Molitor in baseball. He served as bench coach with Minnesota from 1999-2001 and was then the hitting coach for the Seattle Mariners in 2004. In 2005 he rejoined the Twins organization, serving as a minor league instructor through 2013. He then moved back to the big-league Twins, working as a coach in 2014.

In 2015, the Minnesota Twins hired Molitor as their new manager. He would hold the position for four seasons, guiding the club to a cumulative 305-343 mark that included three finishes in second place wrapped around a disastrous 103-loss campaign in 2016. Molitor was let go following the 2018 season, but at age 64 he continues as an advisor with the Minnesota organization.