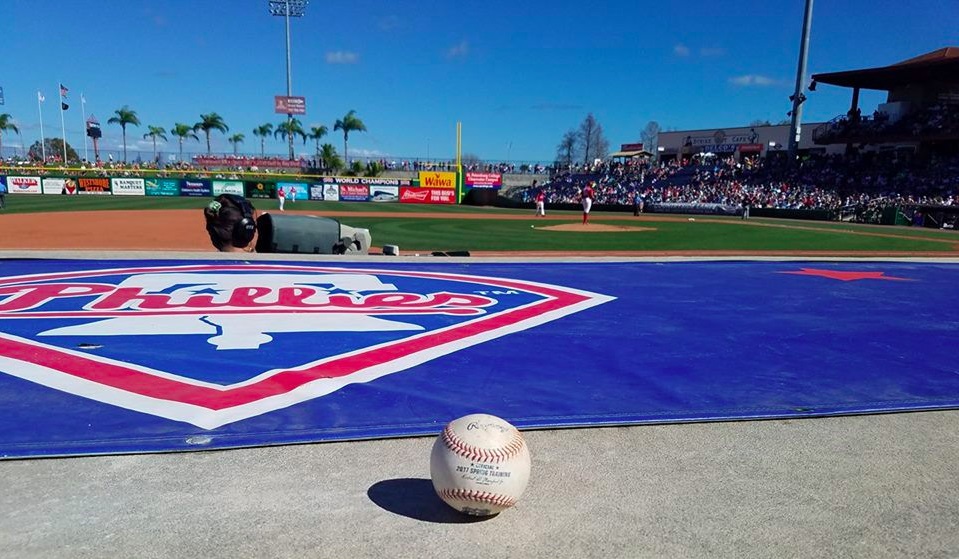 Spring training was off to a roaring start for the Philadelphia Phillies. They had the best record in all of Major League Baseball – Florida or Arizona – when Covid-19 closed down spring training and everyone was sent home. As someone who lives in the heart of the Grapefruit League, it went from the best of times to the worst of times.

The newly-renovated TD Bank Ballpark had opened just blocks from my house. I had been on the City of Dunedin’s Stadium Advisory Committee working with the city, neighbors and the Toronto Blue Jays to see the project to fruition. It was almost six years of hard work and we went overnight from the triumphant celebration to a town that was desolate and empty. Streets that had been clogged with both cars and pedestrians were so empty that you hardly needed to look before crossing.

Now a little over two months later we are waiting for word as to how the season will start, if it will start. On Monday, May 11, MLB owners approved a plan that if agreed to by the players would start the 2020 season on July Fourth with a regular season consisting of 82 regular season games.

According to Jeff Passan of ESPN some of the other specifics include:

For me, the third item on this list is the most interesting. As part of the Covid-19 restrictions on travel, the Canadian government has implemented a mandatory 14-day quarantine for everyone entering the country. This poses an extraordinary burden on “Canada’s National Team”, the Blue Jays. It would be impossible for them to be able to play in Toronto under those restrictions. So where does that leave them? Most pundits posit that they would move to their southern home here in Dunedin. The Jays have the required facilities, as well as a brand new stadium. Additionally, playing in the smaller stadium without fans would be more cost effective.

Where does that leave teams in other Covid-19 hot spots such as New York, Pennsylvania and California?

Bill Shaikin of the Los Angeles Times in his article from May 18th wrote “the governors of California, New York, Texas and Colorado all said teams would be welcome to play ball in their states. Games would not be open to fans, at least for the first part of the season. Newsom (California governor Gavin), speaking at a news conference in Sacramento, said that “pro sports, in that first week or so of June, without spectators, and modifications … can begin to move forward.” He said he has spoken with “league representatives from all the major league sports.””

That still leaves no real answer for Pennsylvania. Governor Tom Wolfe has been steadfast in his tight restrictions, especially for Philadelphia and Pittsburgh.

Even if the cities allow teams to play in their own major league stadiums, it may be more reasonable to hold games without fans in the smaller spring training ballparks and broadcast the games back home. The Phillies do just that from Spectrum Field in Clearwater during spring training. It would reason that they could do the same over a full season.

In his May 13th press conference, Florida Governor Ron DeSantis stated, “We would love to have Major League Baseball and I think the message is that our people are starved to have some of this back in their lives. It’s an important part of people’s lives.”

There is currently no definitive answer as to what will actually happen. Such an announcement cannot come until a final agreement is reached between the owners and the players union. The two sides have reportedly made some progress, but it’s anyone’s guess how things will work out.

2 thoughts on “Might the Phillies play their 2020 season in Clearwater?”