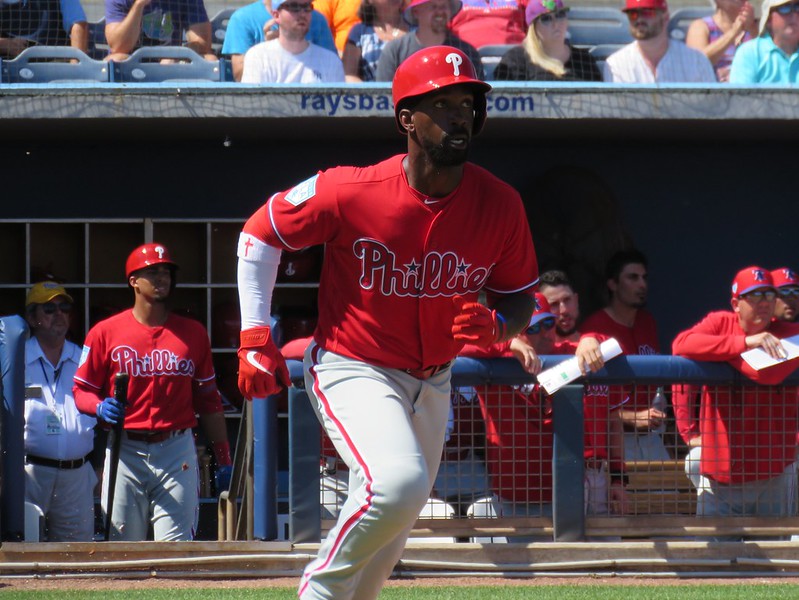 The Phillies were hoping to sign J.T. Realmuto to a multi-year contract extension before 2020 Opening Day. But with the delay of the Major League Baseball season due to the Covid-19 health pandemic there is a hault on all transactions until further notice.

Both parties would still like to make a long-term deal happen, especially the Phillies. Realmuto is scheduled to hit the free agent market next off-season. The 2019 National League All-Star won Gold Glove and Silver Slugger Awards last year and finished 14th in voting for the NL Most Valuable Player Award. Realmuto accomplished all that following a relatively slow start (.767 OPS before the All-Star break, .892 OPS after the break.)

For these pieces, we here at The Bell were asked to provide our recommendations to new Phillies manager Joe Girardi as to his best everyday starting lineup. I give that below, but I’m also going to examine the overall roster as well. I’ll also be giving a couple of alternate lineup that the skipper can use based on opposing pitching match-ups.

Andrew Knapp will once again most likely be Realmuto’s backup. Knapp agreed to a one-year, $710,000 contract in the off-season, avoiding arbitration after posting a .518 OPS over 81 plate appearances before the All-Star break, but then a .760 OPS in 79 plate appearances after the break. The Phillies also have young Deivy Grullon on the 40-man roster at the catching position.

Rhys Hoskins, Jean Segura, Didi Gregorius and Scott Kingery will be the Phillies’ everyday infielders. They are locks. Hoskins will be the first baseman. Gregorius the shortstop. Segura and Kingery will play second and third. Although the Phillies have not formally decided who will play where, they really want Segura at third. He played there exclusively during the Grapefruit League. Girardi has said that he liked what he has seen from Segura so far at the hot corner.

The utility infield spots are up for grabs. The Phillies had five veteran infielders in camp as non-roster invites: Logan Forsythe, Phil Gosselin, Josh Harrison, Ronald Torreyes, and Neil Walker.

Walker might be a favorite for one bench job because he is a switch-hitter, while the other four all bat right-handed. He also has played at least 15 games at first, second, third, and in right field at some point over the last two MLB seasons. And he would bring a dozen games of valuable postseason experience to the Phillies bench mix.

Harrison is able to play multiple positions around the infield. He can fill-in on a corner outfield spot if needed but hasn’t played the outfield in an MLB regular season game in the last two seasons. He is a former two-time NL All-Star and has postseason experience, which increases his value for a team that wants to win now.

In the Phillies outfield, Bryce Harper’s spot in right is the only absolute certainty heading into the season. However, all signs seem to be pointing towards Andrew McCutchen being ready to go whenever Opening Day materializes. That would resolve the starting left field position as well.

Jay Bruce is a valuable power lefty bat who can provide a back-up to McCutchen in left as well as an option to give ‘Cutch’ a rest against certain right-handed pitching. Bruce is also the likely primary option as a Designated Hitter if MLB brings the DH position in for the entirety of the 2020 season.

Adam Haseley is likely to be the primary center fielder, while a healthy Roman Quinn would also make the club as a second center field option. Quinn also provides tremendous speed off the bench.

Assuming everyone mentioned is healthy, it leaves questions for players such as the right-handed hitting Kyle Garlick and left-handed Nick Williams, both of whom are on the 40-man roster. Would the Phillies carry a sixth outfielder? MLB was already set to expand to a 26-man roster this season. Now word is that the agreement made with the Players Association calls for a 29-man roster when the season first opens. Much will depend on how that actually shakes out.

Nola, Wheeler and Arrieta are locks. Eflin should be a lock, but the Phillies have said he will compete for a job. That might simply be a motivator and nothing more. If Eflin can be considered a lock, then the Phillies have one rotation spot available.

Pivetta and Vince Velasquez are the top two competitors for that role. The other will either fit into the bullpen or be assigned to Triple-A and serve and stay stretched out for if (when) the Phillies ultimately need an injury replacement. Ranger Suárez was also competing for that fifth starter role during spring training and would give the rotation a left-hander. However, I believe that Suarez will most likely be moved to the bullpen at the start of the season, a role he filled well last year.

Perhaps new pitching coach Bryan Price can tap into the raw talent and draw out the most from Suarez, Pivetta, and Velasquez. I listed the right-handed Pivetta in the starting rotation spot here only because there was excitement about him down in Clearwater right up until the time play had to be suspended.

It doesn’t look good right now for Dominguez to open the season. In fact, there is much uncertainty for him regarding 2021, as his injured elbow still might require surgery.  Arano was on track to be ready when the season opened, so this stoppage would probably help in that regard.

Tommy Hunter is optimistic that he will be ready. It is easy to see the Phillies being cautious with him, but the stoppage could prove perfect for the veteran righty as well. If he is ready to go, he would be a candidate to take the Dominguez spot.

Liriano and Swarzak are listed here for the final two bullpen spots. The southpaw Liriano went 5-3 with a 3.47 ERA in 69 appearances last season with the Pirates. The righty Swarzak went 3-4 with a 4.56 ERA in 59 appearances with the Mariners and Braves. Both would bring veteran experience to the pen.

I am going to put three different batting orders that could potentially be the way the Phillies go. It also depends on whether MLB decides to go with the universal DH for the 2020 season. Girardi could mix things up a bit depending on the opposition pitcher in a given game. But I like the way these three lineups look based on such match-ups:

Lineup One was based off actual stats to support those positions in the batting order:

5.     Hoskins [Would probably look similar in the 4th and 5th spot in lineup]

Bruce could fill the role of DH, a lefty bat off the bench, and left field to give McCutchen a day off or during a doubleheader.

Quinn can back up all of the outfield positions as well as DH, pinch-hit, and pinch-run.

Harrison can DH, pinch-hit, and serve as a utility player in both the infield and outfield.

Then you will probably have Williams as another bench player. He is limited a back-up role at the two corner outfield positions but can also serve as the DH and come off the bench as a pinch-hitter.

Questions will remain as to what the Phillies would do with Forsythe and Gosselin. And then there are talented rookies Alec Bohm and Spencer Howard – could they work into the mix in a shortened season?

We will have to wait until we get closer to an actual start to find out more on what will happen with the additional players and call-ups. And a final determination on MLB active roster sizes will go a long way towards helping make some of the difficult decisions. Until then, this is what I believe will be the Phillies top roster options when the 2020 season actually gets started.