A grand welcome to the Phillies starting lineup for Jay Bruce

Man, did the Philadelphia Phillies (34-27) ever need this kind of a game? At Petco Park in San Diego, the offense finally awoke after a week-long slumber. As a result, the Phillies drubbed the host Padres by a 9-6 final score on a beautiful Tuesday night in San Diego.

The victory took just a little of the sting out of the pre-game announcement that outfielder Andrew McCutchen would miss the rest of the 2019 season with a torn UCL in his knee, which he injured in a rundown on Monday night.
The win snapped a five-game losing streak for the Phillies. It also pushed them back in front of the Atlanta Braves by a half-game in the NL East Division standings, though the two teams are tied in the loss column.
The Phillies got on the scoreboard first in the top of the 2nd inning when newcomer Jay Bruceand new third baseman Scott Kingery ripped back-to-back doubles. It was only the beginning of what would prove to be a memorable first start in a Phillies uniform for Bruce.
San Diego briefly took the lead in the home 3rd inning when Ian Kinsler led off with a double. That was followed by Phillies starter Jerad Eickhoff hitting Austin Hedges. Eickhoff’s counter-part, Chris Paddack, then bunted the two runners over to second and third. Greg Garcia followed with a double to right, scoring both and putting the Padres up by a 2-1 score.
I say “briefly” on that Padres lead, because the Phillies would take it right back in the top of the 4th inning. It began with a great at-bat from J.T. Realmuto, who won an eight-pitch battle with Paddack by lining a base hit. Bruce then followed by driving a ball out over the wall to the opposite field in left, the two-run shot giving the lead back to the Phillies by a 3-2 score.
Paddack may have been a little shaken by that blast. He went to 2-0 on the next hitter, Kingery, who then blasted his fourth homer of the year deep into the left field upper deck to push the Phillies lead out to a 4-2 margin. 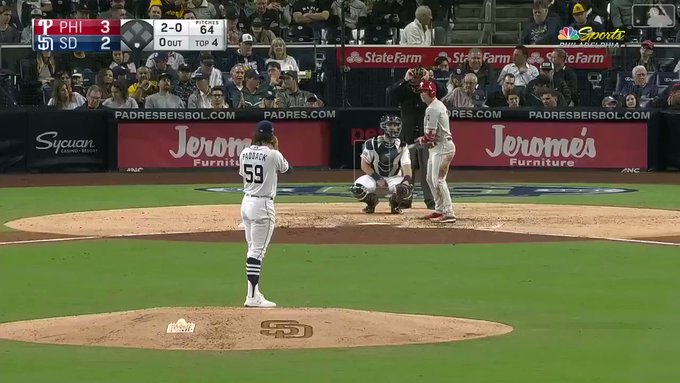 285 people are talking about this
Twitter Ads info and privacy
Eickhoff then began to settle in and shut down the San Diego lineup. He retired six straight at one point, and kept the Padres off the scoreboard into the 6th inning.
Bruce gave him more runs to work with in the top of the 5th inning. Bryce Harper led off with a base hit. The next batter, Jean Segura, would then reach on an error by his opposite number at shortstop, Manny Machado. One out later, Realmuto singled, and the Phillies had the bases loaded. They remained that way for three pitches. On the third of those, Bruce crushed another homer, this one over the right field wall for a grand slam. 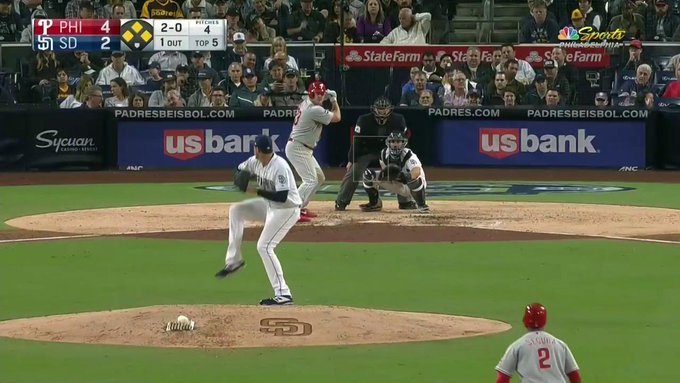 A grand slam, his second homer of the game, his third hit ans six RBI!

507 people are talking about this
Twitter Ads info and privacy
The Phillies took a comfortable 8-2 lead into the bottom of the 6th before the Padres finally dented Eickhoff again. It came on one swing of the bat when Franmil Reyes crushed a solo home run, his 18th of the season, over the wall in dead center field.
Eickhoff would get through the frame with no further damage, but it would also be his final inning as manager Gabe Kapler decided to go to the bullpen. It was a much-need Quality Start for the right-hander, who allowed three earned runs over his six innings pitched.
Juan Nicasio came on and surrendered a pair of hits in the bottom of the 7th inning. He was lifted for Jose Alvarez with two outs, and the lefty needed just one pitch to get out of that mini-jam.
In the top of the 8th inning, a cold bat finally found some fire. Maikel Franco, who has lost playing time at third base to Kingery after falling into a deep slump, came up to pinch-hit for Alvarez. Franco jumped all over a 1-2 slider from Padres reliever Luis Perdomo, crushing it way out to left field for his 9th home run of the season to give the Phillies a 9-3 lead. 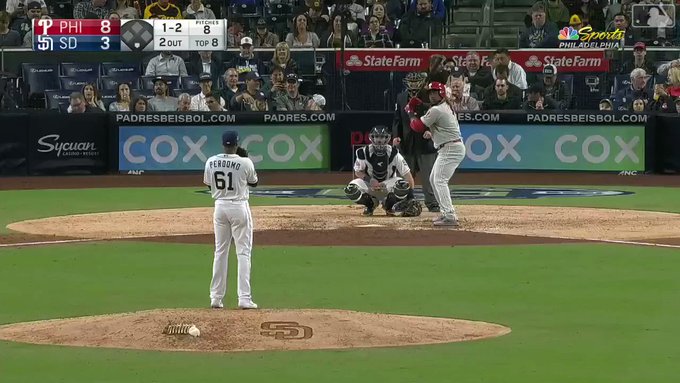 119 people are talking about this
Twitter Ads info and privacy
The Padres got that run back and more – quickly – in the home 8th. Kapler decided to give Edgar Garcia a chance to redeem himself after the rookie had surrendered four runs in his previous outing in Los Angeles. Instead, Garcia was crushed again.
A solo homer by Reyes led off the inning. Garcia then walked Machado and served up a massive two-run home run to Eric Hosmer, cutting the Phillies lead down to a 9-6 margin.
Hector Neris came on for the 9th inning, trying to protect the victory for Eickhoff and the team. He gave up a one-out single, and that brought Reyes to the plate with a chance to do more damage. But Neris won a huge eight-pitch battle, striking Reyes out with a perfect splitter for the second out. The Phillies closer then earned his 11th Save of the season by getting Machado to pop out to short center field.
This much-needed victory raised the Phillies record during their 23-game tough stretch of the regular season schedule to the 11-11 mark. With a win in the Wednesday series finale, they can actually come through with an overall winning record during a difficult month.
This west coast trip ends tomorrow, and the Phillies will come home for the weekend at the start of a six-game homestand against the Cincinnati Reds and Arizona Diamondbacks. Once that has ended, a streak of 26 consecutive games within the division will begin, lasting through and past the MLB All-Star Game break.

Making his first start in a Phillies uniform following a trade from Seattle just two days ago, Bruce ripped a double and two home runs over his first three plate appearances.
The first double got the offense going in the 2nd inning. The first homer put the Phillies up in the 4th inning. The capper was the grand slam, which came in the top of the 5th inning and provided would turned out to be the difference-making runs. All-in-all, Bruce went 3-4 with three runs scored and six RBIs.
He isn’t going to do this every night. But Bruce has the ability to be a consistently impactful bat, and the Phillies desperately need that right now. On this night, he showed fans exactly what that looks like.