The late Roy Halladay is justifiably beloved by the Philadelphia Phillies fan base. The big right-hander, who died tragically at the young age of just 40 while piloting his private plane in November 2017, was chosen as one of the 2018 Phillies Wall of Fame honorees after going 55-29 over parts of four seasons with the club.

‘Doc’ registered a 3.25 ERA and 1.119 WHIP mark across 103 starts with the Phillies, allowing 649 hits over 702.2 innings with a 633/137 K:BB. He also tossed a Perfect Game in a Phillies uniform, as well as one of only two postseason no-hitters in Major League Baseball history. Halladay was the 2010 NL Cy Young Award winner, finished as the runner-up for the honors the following year, and was an NL All-Star in each of those two seasons.
But as beloved as Halladay is in Philadelphia, he is at least as popular north of the border in the city of Toronto. There, Halladay pitched for parts of a dozen seasons in the uniform of the Toronto Blue Jays. He went 148-76 in Toronto and was a six-time American League All-Star. He captured the 2003 AL Cy Young Award while with Toronto, and finished among the top five in voting four more times.
Now, Halladay and his family will enjoy another tie to the Blue Jays organization, at least temporarily. Braden Halladay, the 18-year-old eldest son of Roy and his wife, Brandy, was selected today by Toronto with their 32nd round pick as the 957th overall player chosen in the MLB Amateur Draft. 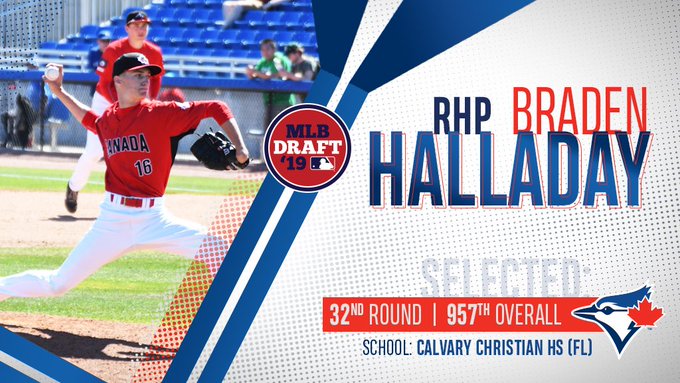 1,530 people are talking about this

If that draft round seems familiar, it should. That was the uniform number worn by Braden’s dad while a member of the Blue Jays. Doc was unable to keep the number when he was dealt to the Phillies, as it had been retired in honor of Phillies Hall of Famer Steve Carlton. Halladay instead wore uniform number 34 in Philadelphia.

Braden, a right-handed pitcher like his father, was born and raised to age 9 in Canada but moved with the family down to Tarpon Springs after the trade to the Phillies.
“I find myself at the first day of school, when they ask your name and your grade and a fun fact about you, my fun fact is always I was born in Canada,” Braden said per MLB.com’s Gregor Chisholm last March. “I feel like I couldn’t have had a better place to grow up. I feel I would not be anywhere near where I was. I still go back once or twice a year, and even though I’m not living there, I still feel it’s a part of who I am.”
He was chosen out of Calvary Christian High School in Clearwater, Florida. All during his career, Braden wore a patch with the Canadian flag on his glove, and proudly considers himself as having dual citizenship.
Braden was invited to Baseball Canada’s U18 spring training camp on March 6, 2018, and pitched a scoreless inning in the Canadian Junior team’s exhibition game against the Blue Jays on March 17, 2018.
On hand that day to watch? None other than Doc’s old Phillies manager, Charlie Manuel, who had promised during his speech at Doc’s memorial service the previous November at Spectrum Field in Clearwater to see Braden play. “I’m so glad I came over,” Manuel said per Jim Salisbury of NBC Sports Philadelphia after the outing. “He did good. I’m glad he got ‘em out.”

Braden Halladay@BradenHalladay
Thank you @BlueJays for drafting me in the 32nd round today! It’s a great honor! It’s with mutual understanding that I’ll still be honoring my commitment to Penn State! I look forward to college and bettering myself as a player and person, thank you to all who have supported me! pic.twitter.com/tUcKWZESPl

1,385 people are talking about this
The Blue Jays know that they will not be able to sign Braden, who is committed to attend Penn State University. If Halladay produces at the collegiate level with the Nittany Lions he could find himself taken again when he is eligible for the 2022 MLB Draft.
Originally published at Phillies Nation as “Blue Jays select Roy Halladay’s son, Braden, in 2019 MLB Draft“