With rumors swirling, Franco hopes to prove he is the third base answer

There were rumors floating around during much of the off-season that the Philadelphia Phillies were possibly going to be moving on from third baseman Maikel Franco.

It would be understandable if that theory grew from the possible signing of young superstar infielder Manny Machado. If the Phillies indeed were to sign Machado, and if he were to agree to play third base with Jean Segura staying at shortstop, then Franco would clearly be expendable.
However, such speculation should never have been considered as likely. For one thing, the Phillies had a number of realistic competitors for the services of Machado. For another, Machado had already made it known publicly that he wanted to play shortstop. Also, the Phillies were involved in the pursuit of Bryce Harper, and were unlikely to sign both players.
None of that stopped folks such as NBC Sports Philadelphia’s Corey Seidman from making statements such as this one regarding the Phillies incumbent third baseman: 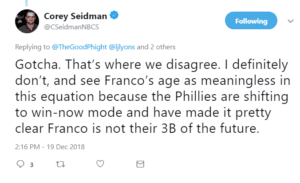 It’s difficult to see, short of replacing Franco with someone like Machado or Mike Moustakas, why this would necessarily be the case. Neither Phillies management nor manager Gabe Kapler has done or said anything to indicate that “Franco is not their 3B of the future.”
The public pursuit of Machado doesn’t say that at all. What that says is that management recognizes that the team desperately needs a truly dynamic bat for the middle of their order. It speaks to the impact talent of Machado, not to any lack of talent regarding Franco.
Though he was able to play in 10 games, Franco missed most of last September with various injuries. Despite ultimately playing in just 131 games he banged 22 home runs in 433 plate appearances. He also hit a career-high .270 while raising his OBP by 30 points, his slugging percentage by 58 points, and his OPS by 90 points from the 2017 season.
Had he been given the health of his first two full years as the Phillies starting third baseman, Franco was on a 30-homer, 90+ RBI pace last season before that final month.
Defensively, Franco did indeed experience a poor season. Of the 30 players who saw a minimum of 500 innings at third base in 2019, Franco ranked just 26th in Fangraphs defensive rankings at the position. That is down from 23rd in 2017 and 10th in the 2016 season.
With increased work and better conditioning there is no reason that Franco cannot at least maintain a league-average level of defensive play at third base. Offensively, only four big-league third basemen reached the 30-homer mark a year ago. Franco’s projected RBI total had he remained healthy would have put him among the top five at the position.
Playing most of the upcoming 2019 season at just age 26, Franco cannot become a free agent until after the 2021 season. He is signed for this season at $5.2 million. That makes him a solid financial fit considering the team is still out shopping.
The Phillies have other positions at which money would be far more wisely spent right now. They could still use a more veteran option for the starting pitching rotation such as Dallas Keuchel. And they really could still use a more proven, dynamic bat such as that of Harper’s for the middle of their order.
To me, there is no reason to change from Franco to Moustakas at this time. And in fact, our Tim Kelly reported just two days ago here at Phillies Nation that the team signing the former Royals third sacker is becoming increasingly unlikely.
Now if next off-season the Phillies should find that either Nolan Arenado or Anthony Rendon is actually available as a free agent, we can re-visit the discussion at that point.
Whether Franco is the Phillies “third baseman of the future” is a question that his performance and health during this coming 2019 season will play a large part in answering. But short of general manager Matt Klentak landing a genuine superstar in Machado, he should remain the Phillies third baseman of the present.
Originally published at Phillies Nation as “Maikel Franco enters spring training hoping to prove he can be the third baseman of the future“