Fans of the Philadelphia Phillies have been focused on potential changes to the starting lineup for the 2019 season for obvious reasons. A team that hopes to become a contender had problems both producing runs and playing defense a year ago, yet battled for the division lead into September.

The club began to make improvents in the outfield with the December free agent signing of veteran Andrew McCutchen. Slotting the 32-year-old former National League Most Valuable Player into left field allowed the Phillies to switch Rhys Hoskins back to his more comfortable position at first base.
The specter of Bryce Harper also continues to hang over the incumbent outfielder mix. If the Phillies are successful in their pursuit of the free agent superstar, he and ‘Cutch’ would be everyday starters on the outfield corners for the Phillies for the next three years, the length of McCutchen’s contract.
Whether the team actually lands Harper or not, this is going to be a pivotal season at the start of a defining period in the career of one of those outfielders, Aaron Altherr.
Signed for the upcoming 2019 campaign at $1.35 million, Altherr cannot become a free agent until after the 2021 season. Unless he is traded or released, he is going to be with the Phillies for the next three years. Having turned 28-years-old last month, Altherr is due to be with the Phillies through what will be the prime years of his career.
Though he only actually lived there for the first six months of his life, Altherr is one of the few European-born players in Major League Baseball. He was born in Landstuhl, Germany to a mother serving in the U.S. Air Force and a father who was a professional soccer player.
The Phillies selected Altherr as an 18-year-old in the ninth round of the 2009 MLB Amateur Draft out of an Arizona high school. Following the 2010 season he was ranked among the Phillies top ten prospects by Baseball America.
Altherr spent the next three years rising incrementally through the Phillies farm system, spending the entire 2012 season with Low-A Lakewood and the entirety of 2013 with High-A Clearwater.
By the time he arrived at Double-A Reading for the 2014 season the big-league Phillies were still trying to transition from the popular, successful core group of players who had been consistent winners in the previous decade.
Altherr didn’t have a great year at Reading, slashing just .236/.287/.399 over 120 games. But his 14 homers, 43 extra-base hits, 12 stolen bases and solid play in center field demonstrated athleticism that the team’s decision-makers at the time saw as potentially valuable.
That summer, Altherr received his first looks at life in the Majors when he appeared in two games. On June 16 in Atlanta he was called on to pinch-hit for reliever Mario Hollands in the top of the 12th inning of a 1-1 tie with the host Braves. His first big-league plate appearance saw Altherr face right-hander Anthony Valvaro and resulted in his making the final out of the inning by flying out to center field.
On July 3 in Miami, Altherr got his first start. He played the entire game that evening and took an 0-4 collar. It would be his last taste of life in ‘The Show ‘for more than a year. Playing well over the first four-and-a-half months of 2015 with Triple-A Lehigh Valley, he earned another shot in mid-August back in Philly.
It was on August 19, 2015 against the Toronto Blue Jays at Citizens Bank Park that Altherr finally recorded his first big-league hit. With two outs in the bottom of the first inning, Altherr drilled a double to left field off veteran southpaw Mark Buehrle to score Darin Ruf. For the rest of that season, Altherr would be the Phillies starting left fielder.
Over the next couple of seasons, Altherr struggled to become a reliable, everyday starting outfielder for a Phillies team that had gone into full rebuild mode and had dropped to the bottom of the National League. He missed the first half of the 2016 season due to surgery to repair a torn ligament in his left wrist and struggled on his return.
The 2017 campaign seemed to be a possible breakout one. He missed a month with a hamstring injury in late-summer, but still finished with solid numbers. That year he slashed .272/.340/.516 and produced 19 homers, 65 RBI, and 48 extra-base hits over 412 plate appearances.
In December 2017 the Phillies made one of the most perplexing free agent signings in their history when they inked veteran Carlos Santana to play first base. That signing would have ripple effects on Altherr. With Hoskins moved out left field, it left Altherr as part of a right field platoon with Nick Williams.
Altherr struggled with the new role and was even sent back to Lehigh Valley for the entire month of August. He would slash just .181/.295/.333 with eight homers and 20 extra-base hits over 285 plate appearances scattered across 105 games with the Phillies last season.
It would appear that if Altherr stays with the Phillies for the 2019 season, the best he can hope for is to again platoon with Williams in right field. It’s a tough spot to be in for a player who just two seasons ago looked like he might be breaking through as a legitimate starting outfielder. 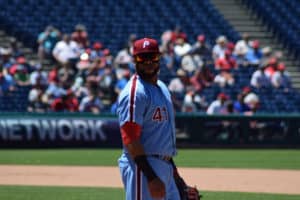 The puzzling acquisition of Santana to play first base sent Altherr into a 2018 platoon. (Ian D’Andrea/Flickr)
Now imagine that Harper actually signs with the Phillies. What then for Altherr – or the talented 25-year-old Williams for that matter? Odubel Herrera is signed for the long-term in center field and Roman Quinn, who turns just 26-years-old in May, is as talented as any of the holdovers.
Altherr will play this entire season at age 28 in what should be the prime of his career. If healthy, and if he can accept the role, he could prove an extremely valuable bench player. Still athletic, he could serve as a backup at all three outfield positions. He would also provide some potential pop and speed off the bench as both a pinch-hitter and pinch-runner.
When he was demoted last summer following his lengthy funk, Altherr was quoted by Tom Housenick at The Morning Call on the difficulty that he was having transitioning from having been an everyday player in 2017 to a platoon-bench role in 2018:
“In my heart, I wanted to be down here to get at-bats. It’s tough to get up there and pinch hit. It’s not something I’m not used to, for sure. Once I’ve got my confidence, I can do that.”
If Altherr still harbors any dreams of becoming a regular starting player in Major League Baseball, short of catastrophic injuries to the rest of the Phillies outfield mix, a trade would appear to be his best personal option. If Harper signs, someone from among the Altherr, Williams and Quinn group would almost assuredly become trade bait during spring training.
One thing that is certain is that with free agency still three years away, where he plays is largely out of Altherr’s control. What he does control is his own physical and mental preparation. Be ready in both regards for the possibility of being a bench player or platoon outfielder in Philly, or even a starter should injuries or a trade come to pass.

His ability to prepare well and produce in the opportunities that he is given this coming season could define the rest of his career, whether that continues with the Phillies or winds up in another organization.