It was just shy of three months ago now that I wrote here at Phillies Nation that general manager Matt Klentak should be considered as being on the proverbial ‘hot seat’ during this current ‘hot stove’ off-season.

My principle argument could be summed up at that time in one paragraph from that November piece: “Phillies fans have waited through those six losing years. Klentak has not done a single thing to this point to elicit their confidence. His statements so far this off-season, and those of club president Andy MacPhail, have done nothing to excite them.”
Since that time, the GM has made a handful of moves that could be pushing the club further along in their attempt to return to consistent contending status.
On December 3, Klentak shipped away the horrible Carlos Santana contract to the Seattle Mariners, correcting a misstep of his from a year earlier, along with perennially disappointing shortstop J.P. Crawford. In exchange he brought back a legitimate big-league shortstop in Jean Segura, as well as a pair of veteran relievers in righty Juan Nicasio and lefty James Pazos.
Just three days later he dumped righty reliever Luis Garcia, who had fashioned an ERA north of the 6.00 mark in two of the last three years, to the Los Angeles Angels. In return the Phillies GM brought back experienced southpaw reliever Jose Alvarez, who at age 29 is coming off the best season of his six-year big-league career.
Less than a week after that deal, Klentak signed free agent outfielder Andrew McCutchen to a three-year, $50 million contract. The 32-year-old former National League Most Valuable Player is certainly not the player that he once was during his 2011-17 peak with the Pittsburgh Pirates. But he will definitely improve the team’s left field defense, if nothing else.
Klentak started off the new year of 2019 strong when he inked veteran right-handed reliever David Robertson to a two-year, $23 million free agent contract. Robertson has been one of the best relief pitchers in the game for a decade, and further strengthens a bullpen that appears to be a strong suit heading into spring training.
That was a busy month for the GM, with two solid trades and two nice free agent signings between December 3 and January 3. But while he was making those moves, his counterparts in the NL East Division were not sitting on their hands.

The Atlanta Braves, who won the division a year ago, added third baseman Josh Donaldson and catcher Brian McCann and re-signed outfielder Nick Markakis, all as free agents. 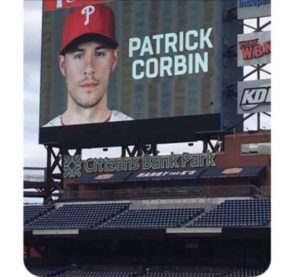 Corbin, who the Phillies wooed, ended up signing with the rival Nationals. (Joe Giglio/SportsRadio 94 WIP)
The Washington Nationals brought in a pair of new catchers in Yan Gomes via trade and Kurt Suzuki as a free agent. They signed reliever Trevor Rosenthal for their bullpen and starters Patrick Corbin and Anibal Sanchez for their rotation. And then in January the Nats added veteran second baseman Brian Dozier.
Both of those clubs also have a talented group of youngsters who can be expected to bring excitement to their lineups in the coming years. The Braves have second baseman Ozzie Albies (22) and outfielder Ronald Acuna (21) leading a group that also includes a bevy of young pitchers. The Nationals have outfielders Victor Robles (21) and Juan Soto (20) leading the youth brigade.
The New York Mets, who were charging up behind the Phillies last September and finished right behind them in the standings, have also improved. In December, new Mets GM Brodie Van Wagenen swung his own deal with Seattle, landing the big bat of second baseman Robinson Cano and perhaps the best young closer in the game today in Edwin Diaz.
Not stopping there, Van Wagenen has added catcher Wilson Ramos, second baseman Jed Lowrie, third baseman J.D. Davis, outfielders Keon Broxton, Rajai Davis, and Gregor Blanco, and pitchers Jeurys Familia, Hector Santiago, and Justin Wilson.

The reason that it is important to point out what those other clubs are doing relates directly to what Klentak had to say today during a wide-ranging radio interview today with Mark Farzetta and Tra Thomas on 97.5 FM The Fan.
During that interview, Klentak made a statement that should send shivers up the spine of every Phillies fan hoping that the team will become a true contender in the coming 2019 season:

“If spring training started tomorrow, we’d be really happy with our off-season. We wanted to be better defensively and offensively, and I think we’ve done that so far.”

There is nothing wrong with the second part of that statement. The Phillies projected roster and lineup does indeed appear to be improved offensively and defensively. The additions of Segura and McCutchen, and the switch of Rhys Hoskins back to first base, should ensure those things.
However, the first part of that statement is what should concern the fan base. If Klentak is truly happy with those improvements were we to start spring training now, as if this would be all the team is planning on doing, then he is once again playing the role of snake-oil salesman in trying to sell you on a deficient product.
Considering the returning talent levels and the additions made by the Phillies and the other three divisional contenders – without even considering the rest of the National League – to be “happy” with where this Phillies team is right now is not a word that I would personally use to describe my own feelings. 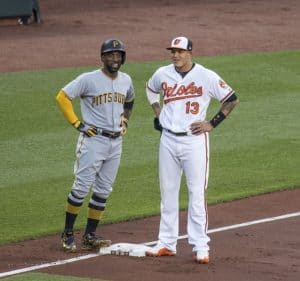 McCutchen (L) is a nice addition, but he is going to need help from someone like Machado (R) in the middle of the Phillies lineup. (Keith Allison/WikiCommons)
In my opinion, as things presently stand, the Phillies are right where they were when last season ended, talent-wise. A fair evaluation would rank them third or fourth in the division, with the Braves and Nats ahead and the Mets on their level.
You could certainly argue that if every single thing went right, the Phillies could contend. If players like Maikel Franco, Nick Williams, Scott Kingery, and Odubel Herrera all improve. If pitchers such as Nick Pivetta and Vince Velasquez improve. If Aaron Nola repeats his outstanding season. If Jake Arrieta turns back the clock. If Rhys Hoskins emerges as a true star player.
I don’t know about you, but that is a lot of “ifs” for me. Any reasonable thinker who has any experience in following the game knows that things never go according to plan, and that the absolute best-case scenario never develops.
This Phillies team still needs a middle-of-the-order proven, dynamic run-producer or two. They still need a more proven starting pitcher to bolster the rotation, preferable a left-hander.
The answers to that first need are available and obvious. Klentak specifically commented on the Bryce Harper and Manny Machado situations.
“We had Manny in here in late-December, before Christmas, and went to visit Bryce in early-January in Las Vegas. That’s kinda been the extent of what we’ve publicized…Those were both really good meetings.”

When asked as to his confidence level on the Phillies ability to actually get to that resolution and sign one or the other, Klentak stated the following:
“That’s a good question. I don’t know if I know the answer to that, really. We only know half the equation…I can tell you this, I feel confident that we put a really strong foot forward, both with our presentations to these guys…I feel really good about that, the pitches that we’ve made. We know these agents, both of them really well. We have good relationships with them, so the dialogue and the communication’s been good. It’s probably the extent of how I can answer that.”

See 975TheFanatic’s other Tweets
In an acknowledgement of the current market’s strength, but also nodding to the fact that it isn’t the only good free agent market to come, Klentak stated the following:
“The one thing we have to always remember is that this is not the last free agent class of all-time. It’s a good one. It’s an important one. This is an important off-season for our franchise, I don’t want to minimize that. But you have to have some discipline too, because there’s gonna be really good players next year too, and really good players the following year. And I don’t know what holes we’re gonna have on our roster after 2019 or 2020. But I’m pretty confident there will be something, because if not, we’d be the first team in the history of baseball to enter an off-season with no needs.”

PHILLIES APPEAR TO BE HEDGING THEIR BETS

What his comments during this appearance show me is that the team is still aggressively involved in both the Harper and Machado battles.

However, those comments also tell me that the Phillies are hedging their bets to an extent, preparing fans for the possibility that they could lose out on both by holding out the carrot of future possibilities.
While landing Nolan Arenado next off-season and Mike Trout the following year sounds nice, the fact remains that no one knows whether either of those attractive superstars will ever reach free agency. The Angels are certainly going to try everything in their power to keep Trout, who has been the face of their franchise for the last half-dozen years.
If the Phillies cannot close on a deal with either Harper or Machado, then selling the wider Philly sports fan base on the baseball team during 2019 is going to be a difficult proposition. That is going to again reflect in the attendance figures down at Citizens Bank Park.
Klentak, club president Andy MacPhail, and controlling owner John Middleton need to figure out what at least one of those players needs to, as Klentak put it today, “sign and move to resolution” – with the Phillies.