If you want to go ahead and say that this has been a roller coaster of a season for Phillies second baseman Cesar Hernandez then you would be on a really exaggerated summer coaster ride.
What this season has demonstrated as well as any in recent memory is exactly what I was saying about him before it even began – it’s time for him to go.
Hernandez has some of the most empty and inconsequential offensive statistics in the game, his defense is nothing special, and at age 29 next season he should not be considered a piece for a future contending Phillies ball club.
This season began with Hernandez hot. Over the Phillies first 43 games through May 19 he was slashing .282/.392/.448 with six homers, 15 RBI, 34 runs scored and nine stolen bases. That would represent the roller coaster upward climb.
Then on May 20, Hernandez wrapped up a road trip in Saint Louis by going 0-3. It was the start of that roller coaster drop-off. And unlike most roller coasters, this one would not be over quick, nor would it lead to a series of thrilling ups and downs.
From that May 20 game through nearly the entirety of summer, Hernandez’ performance would plummet through a prolonged, nauseating, lineup defeating drop.
Across 93 games through September 3, Hernandez hit just .237 with a .309 slugging percentage. Over more than twice the number of plate appearances as in his quick start he hit one fewer home run and stole one fewer base.
It’s not as if Hernandez has been playing outstanding defense. His 1,217.2 innings played is the third-most of anyone at second base in all of Major League Baseball this year. According to Fangraphs he ranks just 12th on their Advanced Defensive Index and 13th in Defensive WAR at the Keystone.
And still, manager Gabe Kapler kept writing his name into the starting lineup. Hernandez has started 138 of the Phillies 146 games through Friday night.
Hernandez made $5.1 million this season and will be arbitration-eligible this coming off-season. He will most certainly be looking for a raise, possibly to the $10+ million per year mark. He cannot become a free agent until after the 2020 season.
There will be a bevy of free agent second basemen or players who could be used at the position who will be hitting the market this winter. The list includes potentially enticing names like Brian Dozier, DJ LeMahieu, Jed Lowrie, Daniel Murphy, Ian Kinsler, and Asdrubal Cabrera. But each has already reached age 30, and all will be hoping for expensive contracts at multiple years of commitment.
With two years remaining until his own free agency, and with those years coming in his ages 29 and 30 seasons, it is entirely possible that Phillies GM Matt Klentak could convince some contending general manager to give up a young prospect with reasonable upside in a trade for Hernandez.
Corey Seidman for NBC Sports Philadelphia speculated earlier this month on a possible return for Hernandez:

“At this point, the Phillies won’t be able to find great value for Hernandez. But they should be able to land a reliever coming off a good year from a team in need of a second baseman.”

The Phillies have their future at the position already in-house. Scott Kingery won a minor league Gold Glove at second base just last year when he hit .304 with 26 homers, 29 doubles, 29 steals, and 103 runs scored with the Triple-A Lehigh Valley IronPigs. 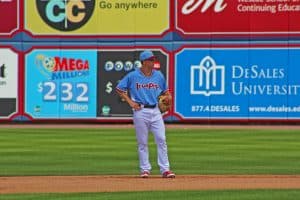 It’s time for the Phillies to commit and turn second base over to Kingery. (Photo by: Lauren McLaughlin)
Yes, Kingery struggled during his rookie season this year in Major League Baseball. The 24-year-old has slashed just .227/.268/335 with seven homers, 33 RBI, 10 steals, and 51 runs scored over 448 plate appearances across 134 games.
However, this was Kingery’s first taste of big-league life, and it arguably came under extreme duress. After playing just two minor league games at shortstop, Kingery was asked to become the Phillies starter at that vital position for much of this season.
Kapler has started him 90 times at shortstop and played him in 106 total games there. Meanwhile, Kingery has seen action in just four games at his natural second base position, with only two starts. He hasn’t gotten a start there since April 16 and has not played the position at all in the last three months.
As I described in a piece earlier this month, Kingery has been mishandled this year by the Phillies. I believe grossly so. As I wrote in that piece: “Put him at second base, and he will thrive. His record tells the tale. The proof is in the pudding. Pac-12 Player of the Year. Paul Owens Award winner. Minor league All-Star and Gold Glove Award winner.”
I also believe that with a full year of MLB experience under his belt, and with the increased comfort level that would come in returning to his natural position, that Kingery will begin to thrive offensively next season.
During spring training back in March the Phillies signed Kingery to a six-year contract. It gave him more guaranteed money than any drafted player who had never played in MLB in the game’s history. They were presumably showing some level of commitment to Kingery and a belief in his abilities.
In the last 10 days, Hernandez has again heated up somewhat. Over nine games during that time he has hit .343 with a .415 on-base percentage. But it is too little, too late to salvage his season, let alone his Phillies career.
The improved stretch might indicate to some that the Hernandez roller coaster has finally bottomed out and is rising again. But the fact is that his numbers remain empty. He has no home runs, one stolen base, and two runs scored in those games.
It is time for the team to fully commit. It is time to dump Hernandez and turn the page from another failed 2012-17 player. Hand the starting job at second base to Kingery for the 2019 season and beyond, taking another step towards a brighter Phillies future.
Originally published at Phillies Nation as “Too little, too late for Cesar Hernandez“