Philadelphia Phillies are no longer a pushover

For a fifth consecutive season, the Philadelphia Phillies will finish at or near the bottom of the overall Major League Baseball standings.
But over the past month, something is obviously different. What had become a doormat team is once again beginning to live up to the “Fightin’ Phils” moniker.
Since breaking out for a dozen runs on Saturday night, August 19 at AT&T Park in San Francisco, the Phillies have a 12-12 record.
On Wednesday night, manager Pete Mackanin‘s suddenly revitalized lineup thrashed the visiting Miami Marlins at Citizens Bank Park by an 8-1 score. It marked the 11th time since that explosion against the Giants nearly a month ago that the club has scored at least seven runs.
The reason for the dramatic turnaround in the Phillies offensive attack is as obvious as the results. The lineup has been infused with a handful of talented rookies, all of whom have made a difference. That difference is finally bringing back hope to the fans after a half-decade of suffering.

THE KIDS ARE ALRIGHT

The first new piece to debut was right fielder Nick Williams. Just turning 24 years of age a week ago, Williams joined the big league club on June 30.
In 275 plate appearances over 65 games, ‘Nicky Dubs’ has hit for a .292/.349/.500 slash line. He has 10 homers, 47 RBI, 38 runs scored, and a 122 OPS+ mark in what is essentially a half-season of play.
Next up was 24-year old catcher Jorge Alfaro, who got the call on August 5. He has been the Phillies starting catcher pretty much since that mid-August weekend series in San Francisco.
Alfaro went into Wednesday’s action hitting for a .311/.354/.419 slash in 79 plate appearances over 19 games. The native of Colombia has hit safely in 16 of the 19 games in which he has appeared. 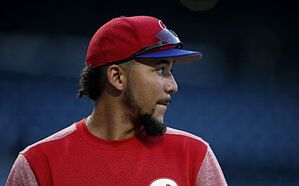 The most recent addition is infielder J.P. Crawford. A perennial top prospect, Crawford was tearing it up with AAA Lehigh Valley before receiving his call on September 5.
Still just 22 years of age, Crawford has struggled the most at the plate. However, he has gone 6-17 with his first three career doubles over his last four starts.
Unless you haven’t been paying attention to Major League Baseball over the past month, you are already aware of the biggest new contributor. Rhys Hoskins was named both the Rookie of the Year and the MVP of the AAA International League.

By the time those honors were handed out, Hoskins was already doing damage in the big leagues. Since being promoted on August 10, he tore it up at a .298/.424/.754 clip.
Hoskins’ OPS was an unreal 1.179, and he entered play on Wednesday with 16 homers, 34 RBI, and 29 runs scored. That all came in just 139 plate appearances over his first 32 career games.
After Hoskins had crushed his 17th homer in Wednesday night’s victory, Mackanin joked: “Actually, I’m going to get his autograph on a ball today. It’s really outstanding. It’s fun to watch.”
Following Tuesday night’s two-homer performance by Hoskins, Jim Salisbury of CSN Philly quoted Williams on his fellow rookie.

“He’s an alien. He’s not human. That’s not real. That’s crazy. And I’m hitting behind him, too, and I’m just constantly watching him and I’m like, ‘Oh, my God.’ What he’s doing is amazing. He plays hard. He’s a smart player. And what he’s doing, I just love watching and being a part of it.”

Mackanin had to really enjoy all of his newcomers last night. The combination of Hoskins, Williams, and Crawford reached base in 13 of 23 plate appearances, with six extra-base hits between them.
Now the Phillies cleanup hitter, Hoskins has Williams hitting behind him in the 5-spot of the batting order. With Aaron Altherr in the three-hole after spending over a month on the disabled list, the Phillies lineup core is legitimately dangerous.
In 347 plate appearances this season, the 26-year old Altherr hit for a .282/.354/.526 slash with 16 homers, 50 RBI, and 48 runs scored entering Wednesday night.
Since June 3, the sometimes maddening, bat-flipping connoisseur Odubel Herrera was hitting for a .343/.389/.563 slash line, scoring 41 runs in that time.

Even third baseman Maikel Franco, who frustrated for most of the season to the point where many felt his long-term job was in jeopardy, has begun to catch fire.
Franco went into Wednesday night’s game hitting .343/.361/.600 over 36 plate appearances in September. This past weekend in Washington, Franco homered in consecutive games for the first time since mid-April.
This is no illusion. The Phillies lineup is far more talented now than the one that was so ineffective over the season’s first four months.
With 14 of their final 17 games at home, this newly muscled-up Phillies lineup should finally provide real entertainment for the fans at Citizens Bank Park. More importantly, there is now reason to be legitimately excited for the future of the team in 2018 and beyond.