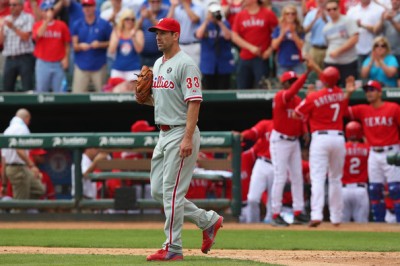 Cliff Lee is a starting pitcher with the Philadelphia Phillies. A pretty darn good one, when healthy.
Anyone who has ever watched him pitch over any period of time also knows that Cliff Lee is a ferocious competitor.
But what Cliff Lee is at this point to the team, more than any of this, is a tangible asset.
As everyone in baseball knows, the Phillies are in a publicly expressed rebuilding program. They have traded away Jimmy Rollins, Marlon Byrd, and Antonio Bastardo already. Rumors continue to swirl around Cole Hamels, Jonathan Papelbon, and Ryan Howard.
There have been rumors involving Cliff Lee as well. After all, he perfectly fits the profile that the Phils are looking to deal. Aging veteran with a high salary who is in no way going to be a part of the future.
He also fits the profile of what other teams covet: an outstanding, veteran, lefty winner who can be a difference-maker in a pennant race and a postseason push.
Of course, there is a well-known problem with Lee. He is coming off an injury to his pitching elbow, one that knocked him out of the rotation from mid-May to mid-July in 2014, and then ended his season after July.
The Phils conceded last season that they rushed Lee back in what now seems like a fairly obvious attempt to showcase him in the run-up to the trade deadline.
The club obviously hoped that Lee would look good enough over 3-4 starts that he would make himself a target for a contender.
It never happened. His first two starts were virtual disasters. A 5.2 inning outing vs the Giants at Citizens Bank Park in which he allowed 6 earned runs on a dozen hits, followed by a 5-inning outing, also at home, vs the DBacks in which he gave up 3 earned on 9 hits.
It was obvious that Lee still wasn’t right, but the team nevertheless ran him out once more, on the trade deadline of July 31st. He lasted just 2.2 before pulling himself as the elbow flared up in what had been his best outing to that point, allowing just 1 hit while striking out 4 and walking none.
In early August, Lee was treated with a platelet-rich injection of plasma. He followed that up with visits to three of the most renowned elbow specialists in the game: Michael Cicotti, David Altcheck, and James Andrews.
All of them gave him the same program, months of rest followed by slowly returning to his throwing program.

“Until he’s pitching in spring training and pitching like we hope Cliff Lee will pitch, then we’ll know that he’s healthy and ready to go.” ~ GM Ruben Amaro Jr

Back in November, Lee was cleared to begin his regular off-season throwing program. He has been long-tossing without pain, and GM Ruben Amaro Jr stated recently that the lefty should be ready to try throwing off a mound by the end of January, if not sooner.
Still, for Lee, for the Phillies, and for any potential suitors, he needs to get out there and prove that he can hold up over some time. Amaro stated it correctly and honestly in saying that Lee is “still a question mark, and until he’s pitching in spring training and pitching like we hope Cliff Lee will pitch, then we’ll know that he’s healthy and ready to go.“
Prior to this injury, such trouble has not generally been an issue for Lee in his career. Before 2014, in his first 10 full seasons in the big leagues between 2004-2013, Lee made at least 30 starts 8 times. From 2005-2013 he only fell short of the 200 innings pitched mark once.
But there is one other issue for Cliff Lee and any of those potential suitors. He is now 36-years old with over 2,100 innings under his belt. His prime is past, and now Lee has to prove that he is healthy just to extend his career.
Contractually, Lee is owed $25 million for 2015 in what is the final guaranteed year. He also has a vesting option for $27.5 million for 2016, but needs to reach the 200 innings mark in the coming season.
That vesting option seems like a longshot pipe dream now. The Phillies and anyone who might trade for him are sure to take it easy in his usage, hoping to preserve him for a late-season pennant push and postseason usage. [sitesocials]
There have been recent rumors that the Boston Red Sox, put off by Amaro’s justifiably high demands for Hamels, have been considering a move on Lee.
But again, while early reports are promising, no one is going to part with any piece of significance until the pitcher proves he is healthy.
For Lee, the best case scenario now is to prove his health, show that he can still be a real asset, and get traded to a team that will give him a good chance to win.
For the Phillies, it’s no longer about having Lee as an integral part of their rotation. Cliff Lee is now simply a trade asset.
They need him healthy and pitching well in order to maximize the asset in a trade that is inevitably going to come if he does again prove he has value remaining.