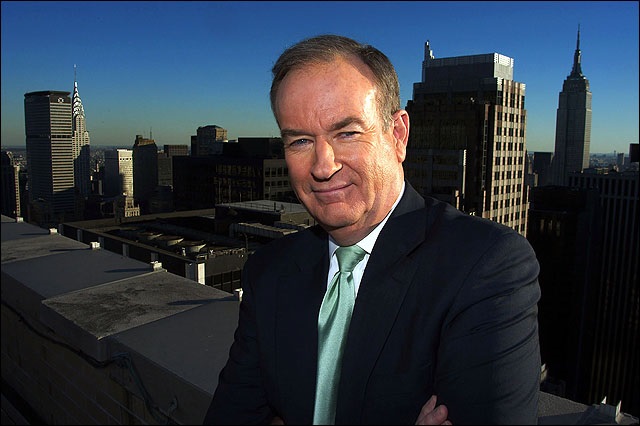 2005 American of the Year: Bill O’Reilly

Fox News commentator, author and broadcast journalist Bill O’Reilly, has been selected as the second “American of the Year” honoree in what is planned to be an annual tradition at this website. The selection of O’Reilly follows last year’s honoring of former NFL player and American serviceman Pat Tillman, who gave his life in the War on Islamofascist Terror.

The radio and television personality and pundit would be the first to say that he doesn’t belong in the company of someone like Mr. Tillman, who gave up his life for his country.

However, I would beg to differ. What Mr. O’Reilly contributes to the American public on an everyday basis is just as vital and important as those physically fighting on the frontlines overseas.

Bill O’Reilly is the lead face and voice in what is rapidly becoming a much more fair and balanced approach to news coverage and commentary on radio, cable television, and on the internet, taking back the airwaves and the newsprint from the traditional, liberal media.

His role in fighting regulary and forcefully to bring out the truth to the American public makes him the perfect honoree during a turbulent, polarized time in our country.

During 2005, Mr. O’Reilly’s book “The O’Reilly Factor For Kids”, was the year’s best-selling non-fiction book for kids. His no-nonsense, straightforward, truthful manner in delivering helpful hints for those in the pre-teen through high school crowd in dealing with everyday problems and situations was an eye-opening page-turner.

Helping the vital young people in America sort through all the BS involved in the pressures of drugs, drinking, dating, the internet, politics, family strife, education, music, television, and every other hot topic to youngsters today was just one reason to select him for this honor.

All throughout the year on his Fox News Channel television program “The O’Reilly Factor”, he challenged folks on both sides of the aisle and all sides of every issue to enter his “No Spin Zone” discussions. In his syndicated radio program known as “The Radio Factor”, Mr. O’Reilly told it like it is.

From Cindy Sheehan to Joe Wilson, from hurricanes to terrorism, Mr. O’Reilly was there to call a spade a spade. He led thoughtful conversations, presenting actual facts to help Americans sort through the melodrama portrayed on traditional network media outlets to get to the heart of, and cut to the truth of, each story.

Near year’s end, Mr. O’Reilly took on the very real threat of recent attacks on the Christmas holiday from secular forces in both the corporate and political worlds. Directly as a result of the hard work and truth-telling of Mr. O’Reilly and his followers, corporations such as Wal-Mart were forced to begin re-recognizing that “Merry Christmas” offends almost no one, and is in fact supported strongly by a vast majority of Americans.

Mr. O’Reilly correctly identified that the proper celebration and recognition of real American traditions such as Christmas, the recognition and respect for the rights of American Christians, and the idea of telling truth at the expense of political correctness are very vital components in maintaining a national identity, and ensuring American security into the future.

For his very public and very sincere media leadership on every important issue to the American people, and most importantly his insistence on truthfulness in commenting and reporting during these biased and polarized times, Bill O’Reilly is named the 2005 American of the Year. And that’s “no bloviating”.