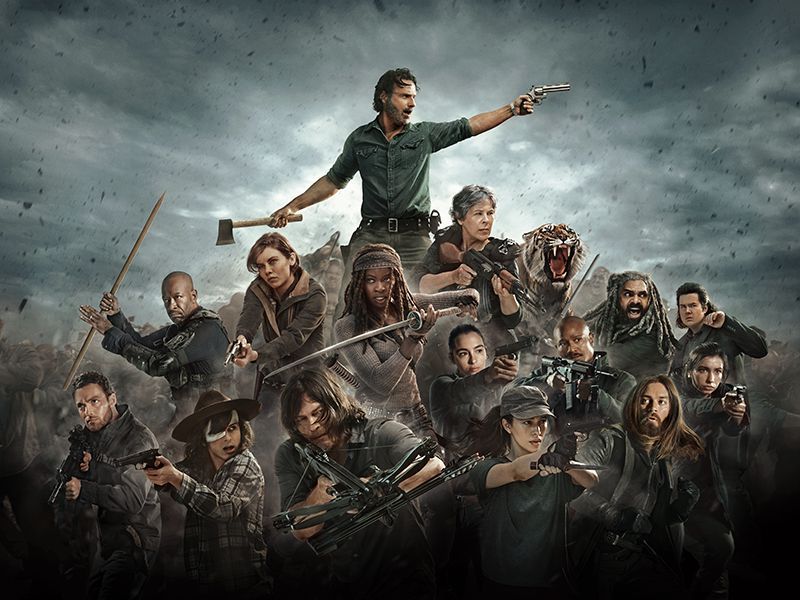 Back in the early years here at my website the ‘TV Watch‘ series was a regular feature. I’m going to attempt to revive the series moving forward by showcasing and recommending (or warning you off) some of the shows that I’m watching now as well as those that have received my attention in recent years.

One of the most iconic tales in TV history draws to an end this coming weekend as the final episode of “The Walking Dead” airs on the AMC network.

Appropriately first airing on Halloween 2010, fans have been treated to 176 episodes across 11 dramatic seasons featuring some of the best acting, special effects, and makeup work that the television medium has ever offered.

For anyone who has never watched, this serial drama is based on an old-school horror concept, a zombie apocalypse. While the show gives plenty of air time to those ‘walkers’, the real drama and draw to the show are the living, the survivors forced to deal with a new world.

Over the 11 seasons, dozens of characters come in and out of the main cast. Most become members of what we regular viewers consider our heroes, or “our group”, the primary group of survivors around whom the show is centering at any point. There are also a number of villains and nefarious groups which our heroes encounter along their journey.

It would take a series of articles to cover the full storyline and all of the interesting characters in this show. But I’ll do my best to give you as brief a primer as I can.

At some point around August of 2010 (actual timeline in the show), a virus emerges and confounds the scientific community. This virus reanimates people shortly after they die, turning them into flesh-eating maniacs. Over the next couple of months the virus slowly spreads before exploding as a global pandemic (sound familiar?) by October of that year.

Rick Grimes, played by Andrew Lincoln, is a Georgia sheriff’s deputy. After a high-speed chase, Rick gets shot and is rushed to the hospital for emergency surgery. All this happens while the world is still normal, prior to the public becoming aware of the impending viral outbreak. After spending weeks in a coma, he awakes to find that the world has collapsed.

Staggering out of the Atlanta hospital, Rick begins a search for his wife Lori and young son, Carl. During this search, Rick meets another survivor, Morgan Jones, and Morgan’s son Duane. Morgan is the first to tell Rick about the outbreak. As he resumes his search for his family, Rick is swarmed and trapped by a zombie horde and gets rescued by pizza delivery boy Glenn Rhee.

Rick eventually reunites with his family on the outskirts of the city, finding that they have taken refuge with his former deputy partner, Shane Walsh. Thinking that Rick had died, Shane and Lori have recently begun a relationship. Shane, Lori, and Carl are in the company of a small group of survivors. This group and those Rick met on his way to them become the central characters as the series begins.

The first season is actually like a limited series. Only six episodes long, the popularity of the show and the graphic novel comic books that form much of its source material led AMC to order a second full season of 13 episodes which began airing in October 2011. Seasons three through nine are each 16 episodes long.

For season 10, the original 16-episode series production was interrupted by the COVID-19 pandemic just as the finale was entering post-production. Scheduled to air in April 2020, the cliff-hanger would not air until October. A half-dozen additional episodes were created and aired from February through April 2021.

This final season 11 was created as a giant 24-episode arc split into three eight-episode segments. The first eight aired from August through October 2021, the middle eight from February through April 2022. And now the final eight segments, which began airing on October 2, are about to bring this epic drama to its conclusion.

Over the course of the 11 seasons our group struggles with internal differences on how to best proceed, external threats from other groups with different agendas, natural disasters, and, of course, the “walkers” as zombies are referred.

By the way, the word ‘zombie’ is never uttered. The series assumes the idea that nothing like this has ever been imagined, and so none of the characters has ever seen “Dawn of the Dead“, “Night of the Living Dead“, “Re-Animator“, “Rabid“, “28 Days Later“, “World War Z“, or any other zombie movie.

Of the original main cast from season one, only one character remains alive as the end approaches, and we’re not even exactly certain as to their fate. Two characters from season one who were considered as supporting cast at that time were elevated to the main cast for season two and are also still with us. For those who watch, you know who I mean. For those who haven’t but may want to start watching, I won’t spoil it for you.

As with many great television dramas, especially during the cable era, TWD has never been afraid to kill off members of the main cast. In fact, most of the characters who you come to know and love over the early years aren’t going to make it to the end.

What the show does well is bring new cast members into the action. And the 11-season length allows some who we didn’t meet for those first early years to enter and become beloved fan favorites. A few of those are still with us as the end arrives.

The writers and showrunners of TWD have left us with any number of unanswered questions. It’s very difficult to see how all of those are going to be answered in just a single series finale episode, even one with a slightly expanded running length.

One of the biggest questions entering the finale is, as usual, who might die and which of our favorites will survive? We already know the answer to a few of those questions. A handful of characters will be split across three spin-offs that begin airing in 2023.

This finale only brings to a conclusion the story of what has become known as “the Mother Ship”, the main “The Walking Dead” program. Over the years a full-fledged Walking Dead Universe has developed which includes two other full series.

“Fear The Walking Dead” has aired 101 episodes over seven seasons and is still in production. “Fear” showed us the beginning of the outbreak and has taken the zombie apocalypse from multiple American states out to both Mexico and Canada. It will return for an eighth season in 2023 and also spawned four “web series“, each exploring specific story elements pulled from ideas initiated in the main show.

“The Walking Dead: World Beyond” aired two seasons of 10 episodes each in 2020 and 2021 and intentionally showcased younger actors. More than any of the others in TWD Universe, this series explores the idea of a possible cure. The ongoing attempts by larger communities and individuals within the scientific community to control or reverse the effects of the ‘zombie’ pandemic.

In summer of 2022 a six-episode anthology series titled “Tales of the Walking Dead” aired. Wholly separate from much of the other material, these were six separate stories, snapshots of how others out in the world were dealing with the events of the apocalypse.

In addition to all the drama, an official aftershow titled “Talking Dead” has aired 228 episodes and 13 specials spread out over 10 years. The talk show format hosted by Chris Hardwick features guests from the various shows discussing their characters and the current action in their particular series and season. The program also presents highlights and coming attractions, runs polls, and provides fan interaction.

This final season of TWD has found what remains of our group having been splintered. Some are under attack and fighting for survival against yet another band of baddies. Others stumble into a new, highly-organized community known as The Commonwealth. Action at this large community has become the focus of the very final episodes.

Who will live? Who will die? On Sunday, November 20, The Walking Dead comes to a conclusion. While the story will live on for a few in those spin-offs, the final resolution to the story for many of our favorites will be revealed. And again, if you’ve never watched, I couldn’t recommend a show more energetically.

MORE FROM THE ‘TV WATCH’ SERIES