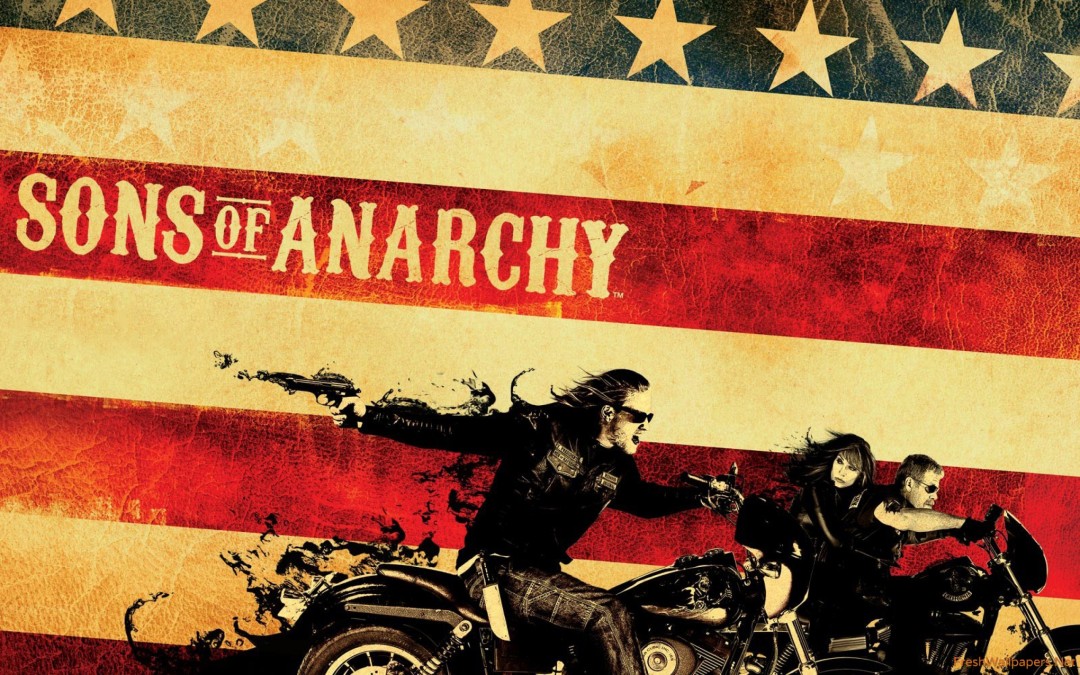 The best gang show on television this side of ‘The Sopranos’ has just concluded it’s second full season, and fans of this emerging masterpiece will be happy to learn that ‘Sons of Anarchy’ has just been renewed for a full third season that will begin airing in September 2010.

For the uninitiated, the show centers on the activities of a biker gang, also known as an outlaw motorcycle club (MC) called the ‘Sons of Anarchy’ which alternately is known by the nickname ‘Samcro’ or ‘Sam Crow’, a moniker loosely based on an anacronym for the official full name of the ‘Sons of Anarchy Motorcycle Club, Redwood Original’ charter.

The show airs on the ‘FX’ network with in-season first run episodes coming on Tuesday nights at 10:00 pm. Prior episodes are available through the Comcast OnDemand service in the TV Entertainment section.

‘Sons’ centers largely around both the MC and family activities of three main characters. Charlie Hannum is a revelation as Jackson ‘Jax’ Teller, a young Vice-President of the MC and the son of deceased club founder John Teller.

Katey Sagal plays Jax’ mother, Gemma Teller Morrow, the matriarch of the family and the MC. Widow of the founder, she is now married to the new President of the MC. That character is Clarence ‘Clay’ Morrow, played by veteran actor Ron Perlman.

The ‘Sons’ run an automotive repair business as a cover front for their real business, a lucrative gun-running operation. They are in complete control of the small town of Charming, California in which they reside and base their operations. While somewhat of a menace to law enforcement in the town, the MC does try to keep the town clean of drugs and other illegal crime operations.

The prime conflict developing in the show is that during the first season, Jax stumbles across a sort of manifesto that his late father wrote just before his death. In it, John had been planning to take the club ‘clean’, getting it out of all illegal activities. Jax begins to see this as a birthright, as his destiny.

His mother Gemma is aware of the manifesto, but is against that direction knowing that her current husband Clay has no intention of changing course. Much of the internal family activity revolves around Gemma running interference and playing mediator between these two most important men in her life.

Clay and Jax begin to butt heads more and more regarding the direction that the MC should take, creating the core of the drama. Other interesting plot lines are developed around the main characters lives and incidents in which they and the club become involved. Story lines also develop involving the fine supporting cast.

That support is led by Maggie Siff as Jax’ love interest Dr. Tara Knowles. A former love of Jax in the past, Tara returns to town and their relationship once again takes off after a major traumatic incident, causing strain on her career and both of their personal lives.

Their principle nemesis is a white separatist organization known as ‘The League’ that is trying to muscle in on Samcro’s gun business while manipulating the local black and Hispanic gangs against one another and against Samcro.

Law enforcement in the town of Charming walks the line between wanting to shut down Samcro but realizing that the MC may actually be the lesser of two evils.

That faction is played by Dayton Callie as Chief Wayne Unser, and by Taylor Sheridan as his Deputy Chief David Hale. From the Federal angle, Ally Walker plays ATF agent June Stahl, trying hard to shutdown Samcro and put the members behind bars.

The first two seasons have seen the development of the characters, with an interesting enough first season followed up by an even better written and more well acted second season that just ended. The first season ends with the death of a major character, something that ‘The Sopranos’ became well known for, and the second season finale will only leave fans thirsty for more next year.

At times, shows like ‘Sons of Anarchy’ slip through the cracks for many TV viewers who habitually only watch the ‘major’ networks such as ABC, NBC, CBS, HBO, and Showtime for their series. But ‘FX’ has ‘Sons’ while AMC offers perhaps the best dramatic show on television in the previously reviewed ‘Mad Men’ series.

While it doesn’t contain the ‘R’ rated language and sexual scenes of other cable shows, it remains edgy enough. In the familial struggles and the struggles of Jax to reform the MC, there is also a chance at redemption here.

If you were a fan of ‘The Sopranos’ but haven’t watched ‘The Sons of Anarchy’ as yet, give it a shot. Once you get to know the characters and follow the plot line after a handful of episodes, you will be hooked.

NOTE: This is a continuation of the ‘TV Watch’ series of television program reviews. To see all entries in the series, click on that below Tag