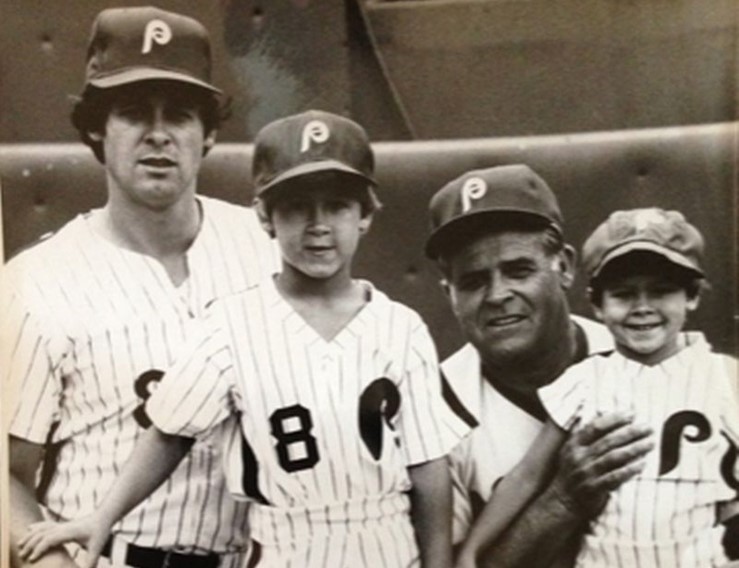 When talking about the great catchers of the 1970’s-1980’s the conversation is likely to highlight a quartet of backstops from that era: Johnny Bench, Carlton Fisk, Gary Carter, and Ted Simmons. But there is another, perhaps not Hall of Fame caliber as those, who rightly belongs as part of the discussion.

At some point today, Bob Boone will blow out candles and/or raise a glass in celebration of his 74th birthday. Boone enjoyed a 19-year playing career that lasted from 1972-90. His family history in the game began well before that, has lasted well after, and makes for one of the greatest multi-generational stories in the history of Major League Baseball.

Bob Boone was born on November 19, 1947, in San Diego, California. His parents, Ray Boone and Patsy Brown, were both born and raised there. Ray was a shortstop and catcher in the Cleveland Indians minor league system at the time, so Bob was literally born into baseball.

Ray would debut in Cleveland the following year, playing his first half-dozen big-league games under player-manager Lou Boudreau and winning a ring with the World Series champion Indians. Ray Boone only received one plate appearance in that Fall Classic, striking out as a pinch-hitter against future Hall of Famer Warren Spahn. Ray would play 13 seasons with six organizations and was named as an American League All-Star while with Detroit in both 1954 and 1956, also receiving MVP votes on three occasions.

In mid-September of 1960, Ray was released by the Boston Red Sox, bringing his playing career to an end at age 37. While recuperating from back surgery he was watching a game on television with Bosox owner Tom Yawkey, who was so impressed with Ray’s observations that he hired the former player as a scout, a role that Ray would hold for the next 32 seasons with Boston. In 1986, Ray Boone would prove instrumental in finding and signing Boston’s second-round draft pick, a pitcher who would finally make his mark in Boston some 18 years later by the name of Curt Schilling.

While the decade of the 1960’s saw Ray’s career end, it would see his son Bob’s just beginning. After playing at Crawford High School in San Diego, Bob moved on to play college ball at Stanford. In 1969 the Philadelphia Phillies made him their sixth-round choice in the June Amateur Draft.

Originally drafted as a third baseman, Bob began his conversion to the catching position in 1971 while with the Philadelphia Phillies’ Double-A affiliate at Reading, Pennsylvania. The Phillies had drafted a talented player from Ohio University named Mike Schmidt, and already had a group of young infielders that included Larry Bowa, Don Money, and John Vukovich.

The move would prove to be rewarding for both the player and the organization. Bob became one of the top defensive catchers in the history of the game over the next two decades. After debuting with the Phillies for a cup of coffee in 1972 he would become the starting catcher through 1981. Over that decade, Boone was a National League All-Star three times, won two NL Gold Glove Awards, and was a key member of five playoff teams, including the 1980 World Series champions. In 2005 he was inducted into the Phillies Wall of Fame. While Bob was developing into an All-Star, his younger brother Rod was drafted by the Kansas City Royals out of Stanford in June 1972. Rod would play four seasons in minor league baseball, reaching as high as the Triple-A level in the Houston Astros organization before hanging up his spikes at age 25.

Feeling that Bob was aging and that they had other options the Phillies sold Boone’s contract to the California Angels in December 1981. Boone would prove to be far from washed up. He would go on to play nine more seasons, seven with the Angels and a final two with the Kansas City Royals. Boone was a 1983 AL All-Star with California and added five more Gold Gloves to his trophy case, including four straight from 1986-89. He finally retired after the 1990 season in Kansas City at age 42.

Bob and his wife, Sue, were high school sweethearts who went on to have three sons: Bret, Aaron, and Matthew. “There was one year when Bret was at USC, Aaron was in high school, Matthew was in junior-high school and they were all playing ball along with Bob, and sometimes there would be 18 games in a week,” Sue recalled in a 2018 article by Dean Balsimini for the New York Post. “If I missed any game at all, it was Bob’s, because I could listen on the radio.”

Both Bret and Aaron would follow in their grandfather Ray and father Bob’s footsteps, enjoying their own lengthy careers as Major League Baseball players.

Bret Boone was chosen in the fifth round of the 1990 MLB Draft out of USC by the Seattle Mariners. Over his 14-year career he became a three-time All-Star and won four Gold Gloves as well as a pair of Silver Slugger Awards. With the 116-win Mariners team in 2001 he finished third in American League Most Valuable Player Award voting.

Early during 2006 spring training, Bret announced his retirement. He would briefly attempt a 2008 comeback before retiring for good as a player that May. That was followed by an even briefer stint as a manager with the independent Victoria Golden Seals in 2010.

Aaron Boone was chosen by the Cincinnati Reds in the third round of the 1994 MLB Draft, also after playing college ball at USC. He went on to a 12-year MLB career, missing the 2004 season entirely due to an ACL tear in his left knee suffered during an off-season pickup basketball game. Aaron was a 2003 All-Star with the Reds before getting dealt at the trade deadline to the New York Yankees. Over his final three years in Cincinnati, Aaron was the starting third baseman under a team managed by his father.

After undergoing open heart surgery during 2009 spring training, Aaron returned to play the final month of his career with the Houston Astros later that year. Almost immediately he went into broadcasting, a role he would hold with ESPN for years.

Following the 2017 season, Aaron was hired as manager of the New York Yankees. Over the last four seasons he has guided the Bronx Bombers to a 328-218 mark, winning the AL East Division crown in 2019 and reaching the postseason each year. New York just recently announced that Aaron has been signed to a new three-year contract.

Today, Bob Boone celebrates his first birthday outside the game since he was a young child. He had been with the Washington Nationals as an advisor since that franchise relocated from Montreal in 2005. But in early September he resigned, unwilling to conform to the Nat’s organizational policy on receiving a COVID-19 vaccination.

Aaron’s continued managerial stint with the Yankees may not be the end of the line for the Boone family big-league connection, because a new generation may be on the way. Bret’s son, Jake Boone, played college ball at Princeton and then signed with the Nationals. The 22-year-old played his first minor league season this past summer at A-level Fredericksburg. “You can’t help but fall in love with the game,” Jake Boone said in a piece by Joey LoMonaco of The Free-Lance Star. “Just being brought up in that atmosphere, around the game, you really can’t help it. That’s how I fell into this.”

It’s a Boone family tradition, being brought up in that atmosphere around the game of baseball. Happy birthday to Bob Boone, a player, manager, and executive whose career and family legacy are certainly worthy of remembering and celebrating.

This article originally appeared in the IBWAA newsletter on November 19, 2021 and then added here on December 3, 2021 (backdated to remain in line with Boone’s birthday.)