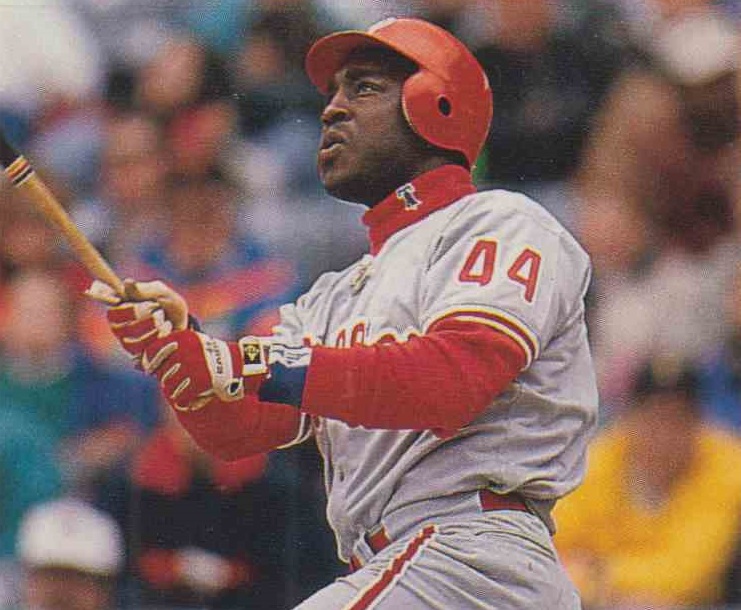 In the fifth round of the 1984 MLB Amateur Draft the Pittsburgh Pirates made Chicago high school product Wes Chamberlain their choice. The youngster also had a choice, and chose not to sign, instead deciding to attend Jackson State University in Mississippi.

Three years later the Bucs tried again, taking Chamberlain with their fourth round selection. This time they succeeded in signing him, but he would never play a single game for the Pirates.

On August 30, 1990, Pittsburgh shipped Chamberlain, Julio Peguero, and a player to be named later who became Tony Longmire to the Phillies in exchange for veteran outfielder Carmelo Martinez.

The Phillies easily got the better of this deal, even though Peguero and Longmire would never pan out. Martinez turned 30-years-old in his first season with the Pirates, who shipped him away in early May. He would bounce between three teams in what was Martinez’ ninth and final year in Major League Baseball.

Chamberlain turned out to be the best piece in the deal. He would enjoy a six-year big-league career, five of those with the Phillies during which he became an important member of the 1993 National League championship team.

During that 1993 season, the right-handed hitting Chamberlain was used as part of a fairly strict right field platoon by manager Jim Fregosi, alternating play at the position with left-handed hitting Jim Eisenreich.

A week ago, Corey Seidman at NBC Sports Philadelphia published a piece in which he explored Bryce Harper‘s five biggest home runs from his first Phillies season in 2019. That prompted a humorous reply on social media inquiring as to Travis Lee’s five greatest Phillies home runs. So, on March 31, I obliged with that piece.

That reflection on the Phillies’ 2000-02 first baseman spurred a Twitter request for the same on Chamberlain. And so, here goes – Wes Chamberlain’s five biggest home runs. They are presented here in chronological order.

September 19, 1990: They say you never forget your first. Well, the first career home run for Chamberlain came during his first full month with the team and in just his ninth big-league game. It was also only his second start, and would prove to be the first complete game that he played in Major League Baseball. In the top of the 2nd inning at Busch Stadium in Saint Louis, Chamberlain drove a 1-2 pitch from Cardinals’ lefty Joe Magrane out deep to left field. The blast tied the score at 1-1 in a game that the Phillies would go on to win by an 8-4 score. This was the first of his 43 career home runs.

August 20, 1991: The Phillies were taking on Barry Bonds, Bobby Bonilla, Andy Van Slyke and the first-place Pittsburgh Pirates at Veteran’s Stadium in this one. Entering the bottom of the 5th inning they were trailing the visiting Bucs by 3-1 and being handcuffed by Pittsburgh southpaw John Smiley. Randy Ready‘s RBI triple scored Dickie Thon to pull the Phillies within a run. Chamberlain then followed by crushing the first pitch from Smiley down the line in left field to push the Phillies on top by 4-3. They would fall behind again, but won it on a two-run walkoff home run by Thon with two outs in the bottom of the 9th inning. This was the third straight game in which Chamberlain homered, and he would also go deep two days later in what was the best power streak of his career. Chamberlain finished fifth that year in the National League Rookie of the Year balloting.

August 1, 1992: With the Phillies trailing the Expos by eight games in the division standings the two teams squared off at Olympic Stadium in Montreal. Chamberlain came to bat in the top of the 1st inning with the bases loaded. Against Expos’ starter Ken Hill he took the first pitch for a ball, then blasted a grand slam out deep to left field, scoring Lenny Dykstra, Dave Hollins, and John Kruk ahead of him. It was all the scoring in the game for the Phillies, whose own starter Curt Schilling would shut down Montreal into the 7th inning. Mitch Williams came on to toss a pair of innings for the save.

August 13, 1993: The Phillies held a nine-game lead in the National League East Division race at this point in the schedule, having spent all but one day on the season at the top of the standings. With a record of 73-42 they were chasing the San Francisco Giants, trailing the NL West leaders by four games in the overall National League standings. The Phillies would enter the bottom of the 9th inning at Veteran’s Stadium trailing the visiting New York Mets by 5-4. The Phillies tied it up thanks to a two-out throwing error by Mets shortstop Kevin Baez. Two batters later, up to the plate stepped Kim Batiste, who delivered a rousing walkoff grand slam. It was one of many electrifying moments provided by that 1993 Phillies ball club. The big home run from Chamberlain came in the bottom of the 2nd inning. With the Phillies trailing 1-0 he took veteran left-hander Frank Tanana out deep to left field, giving the club an early lead.

May 9, 1995: I am admittedly completely cheating here, because Chamberlain was not with the Phillies for this one. On May 31, 1994 the Phillies traded him away to the Boston Red Sox as part of a four player deal in which oufielder Billy Hatcher and reliever Paul Quantrill came to Philadelphia. But this was by far Chamberlain’s biggest career home run. It was just two weeks after the season had begun late thanks to the baseball strike that had lingered from the prior season. Bottom of the 9th, Red Sox tied at 3-3 with the Baltimore Orioles at Fenway Park. Veteran lefty reliever Jesse Orosco retired the first batter of the inning for Baltimore and then Red Sox skipper Kevin Kennedy sent Chamberlain up to pinch-hit for Luis Alicea. Orioles manager Phil Regan countered with a talented, strong-armed young right-hander Armando Benitez, who would enjoy a 15-year career in MLB as one of the game’s top relievers, but who was then just 22 and in his first full season. Chamberlain worked the count to 3-1, then blasted a walkoff home run deep down the left field line. It would prove to be Chamberlain’s final home run in the big-leagues. He would be traded to the Kansas City Royals in August for former Phillies outfielder Chris James. Over the next couple of years he would also play with the Blue Jays, Pirates, and Mets organizations and do stints in Japan, Mexico, and the Independent leagues where he was an All-Star in both 2000 and 2003. But he never got back to the big show, and Chamberlain retired after playing with Winnipeg of the Independent Northern League in 2002 at age 38.

ONE FINAL NOTE: Chamberlain’s biggest hit of all over his entire baseball career just may be this one, a walkoff for Cardenales de Lara to win the 1998-99 Venezuelan Winter League championship.