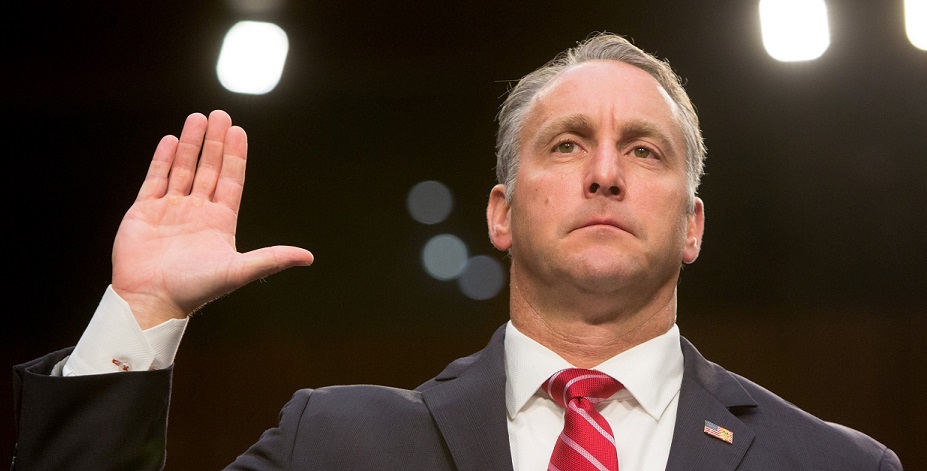 It is an increasingly high-profile job, one where it is difficult, maybe impossible to please anyone on either side of the American political aisle for very long.

I am talking about the person serving at the very top of the leadership pyramid at ICE, the agency responsible for U.S. Immigration and Customs Enforcement.

Into the midst of this tremendously partisan political environment and under the glare of an increasingly harsh media spotlight stepped this year’s American of the Year honoree, Matthew Albence.

On the day after Independence Day at the start of this past summer, Albence began his tenure as the Acting Director of U.S. Immigration and Customs Enforcement. He was elevated to the post by President Trump in an announcement that came back in April.

Prior to taking on the Acting Director responsibilities, Albence had performed the job of ICE Deputy Director since August 2018, leading the nation’s immigration enforcement efforts. Prior to that, Albence served from February 2017 as the agency’s Executive Associate Director for Enforcement and Removal Operations.

In that position, Albence led the mission to identify, arrest, and remove aliens who presented a danger to national security or who were deemed a risk to public safety. He also led the operation to remove those who enter the United States illegally, as well as those who undermine the integrity of U.S. immigration laws and border control efforts.

A graduate of American University with a Bachelor’s in Criminal Justice/Law Enforcement Administration, Albence also holds a Master’s Degree in same from Southern Illinois University.

Albence has a quarter-century of federal law enforcement experience. After beginning his career with the old INS (U.S. Immigration & Naturalization Service) in San Antonio back in 1994 he moved on to supervisory positions in both Chicago and Detroit.

Serving a stint as Unit Chief with the ICE training academy in Glynco, Georgia he then took on positions as both TSA Deputy Special Agent in Charge of the South Central Regional Field Office and Deputy Assistant Director for the ERO Criminal Alien Division.

As you can see, Albence brings a great deal of experience to the job as ICE’s senior law enforcement official. With a budget of more than $7 billion, he oversees the day-to-day operations of the agency. This includes a workforce of more than 20,000 officers, special agents, attorneys, and support personnel who are assigned to more than 400 homeland and international offices.

Albence was promoted to this role during a particularly difficult time of change where United States homeland security is concerned. In fact, Kirstjen Nielsen, the Secretary of Homeland Security, had announced her resignation from that cabinet post in early April 2019.

The toughness cited by President Trump in elevating Albence was displayed numerous times during the year. For example, in July he slammed a member of the press for using the term “raids” in reference to legitimate ICE deportation efforts.

“Calling these raids does a disservice to everybody that’s involved in this process,” Albence said per Ted Hesson at Politico. “A raid brings up all sorts of emotions that conjures images of indiscriminate enforcement actions. That is not what we do … I guarantee you that if we were out there doing raids and we had officers running all over the place picking up targets indiscriminately, you would have videos all over YouTube.”

In October, Albence addressed the issues surrounding a ruling handed down by the U.S. District Court for the Central District of California that immigration officers cannot develop probable cause to believe that an individual may be removable based on certain database checks alone.

“This conclusion is out of step with the realities of modern law enforcement, endangers the public, and construes probable cause in an unfairly restrictive way,” said Albence in a press briefing. “Moreover, this decision, issued by a single judge in Los Angeles, will impact at least 43 states, threatening communities far beyond the one in which this judge sits.”

Earlier this month it was announced that the North Texas region led the nation for a third consecutive year in the number of civil arrests for immigration violations.

“One of the things which is unique — although it shouldn’t be — is [that] the level of cooperation between state and local law enforcement and our officers here is unsurpassed anywhere in the country,” said Albence per Dianne Solis at The Dallas Morning News. “When you have that cooperation, you get these kinds of results.”

It is that issue of cooperation between ICE officers and local law enforcement that has become problematic in some areas of the country. Mayors and other politicians have turned most major American cities into so-called ‘Sanctuary Cities‘, referring to them as safe harbors for illegal aliens.

Democratic U.S. congresswoman Speaker of the House Nancy Pelosi of California and Senators Bernie Sanders and Elizabeth Warren, both Democratic Party candidates for president, have actually published notices to illegals on avoiding a lawful deportation.

“We’re sworn law enforcement officers to conduct these exact sort of operations,” Albence said per Charlotte Cuthbertson at The Epoch Times. “There is no other law enforcement agency in this country that has been asked to ignore the lawful order of a judge.”

While the Democrats continue to aggressively battle against the lawful efforts of ICE officers, those personnel continue to work diligently on a daily basis to enforce the immigration laws of the United States.

Both as a representative of the hard-working and dedicated officers and support personnel of ICE as a whole and for his own efforts over a long career in support of those vital law enforcement operations, Matthew Albence is selected as the 2019 American of the Year.

Below are the individuals who have been named as the American of the Year in prior years. Click on their name in order to read the piece published at the time of their receipt of the honor.

PREVIOUS AMERICANS OF THE YEAR