Despite losses in their last two games, the Philadelphia Phillies remain atop the standings in the National League East Division, a post they have occupied now for all but seven days this season.

But the team has some significant roster and lineup holes which are keeping them from really establishing themselves as clear favorites.
One such hole, by far the biggest where the everyday lineup is concerned, has developed out in center field. Incumbent Odubel Herrera, who has filled the position for the better part of the last five years, is just not getting the job done.
Herrera is slashing just .219/.280/.342 over his first 35 games and 125 plate appearances. This is not some aberration, but the continuation of a career trend. Herrera’s batting average has dropped every season of his big-league career.
From hitting .297 as a rookie in 2015, he has dropped to .286, .281, .255 to his current low point. Over the last four years his on-base percentage has also plummeted from .361 to .325 to .310 and now today’s poor level. His slugging has fallen off for a third straight year from .452 to .420 to its now .342 mark.
From August 1 onwards last season, Herrera slashed just .189/.242/.287 over 45 games and 153 plate appearances. His was not the only poor performance leading to the club’s collapse from first to third place over the final seven weeks of 2018, but it was a major piece to that puzzle.
Searching for a better option, manager Gabe Kapler turned in desperation to Scott Kingery to man the position during the second and third games of the current four-game series against the host Chicago Cubs at Wrigley Field.

However, for all of his natural athletcism, Kingery is simply not a center fielder. This is not a position that you should be learning to play at the big-league level, especially for a contending team.
Kingery did take on the center field position in college with the Arizona Wildcats. However, that was only due to lineup needs at the time during his sophomore season. He was immediately returned to second base when the position opened up in his junior year.
During his first three minor league seasons with the organization from 2015-17, Kingery did not play a single inning in center field. A year ago, Kapler stuck him out there on an emergency basis in one game, and for just 1.2 innings. Otherwise, Kingery’s only professional experience in center field prior to the last two days was in a four-inning stint in one game during his recent injury rehab. 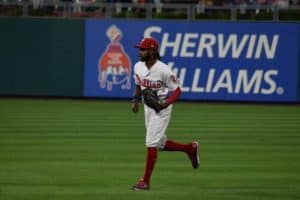 Roman Quinn is the Phillies best center fielder, but he just cannot stay healthy enough for long enough to be considered dependable for the long-term. (Ian D’Andrea)
The Phillies should have learned their lesson a year ago with the misguided decision to force Kingery into the shortstop position. Sure, he can go out there and play shortstop or center field. He is young and athletic, and has played baseball all of his life. But that kind of thought process is better left for Little League teams, not big-league baseball clubs trying to put together a World Series contender.
Roman Quinn is the best center fielder that the Phillies have on their roster at the present time. Of course, Quinn is currently injured – again. There is no way that this organization can move forward hoping that Quinn will somehow manage to suddenly stay healthy once he is ready to return.
Nick Williams has been sent out to Triple-A Lehigh Valley to get some much-needed consistent playing time. Williams is not a center field candidate. However, should he get a couple dozen at-bats with the IronPigs and find his stroke, the Phillies could bring him back to play left field everyday and slip Andrew McCutchen to center field.
Two of the Phillies current top 10 prospects, 23-year-old Adam Haseley and 21-year-old Mickey Moniak, can play center field. But neither is anywhere close to being big-league ready. Haseley has been hot of late, and with a full, solid season could find himself in the mix at the start of the 2020 season, should no better options emerge.
The Phillies signed Herrera to a club-friendly contract that bought out his early years of potential free agency. He is signed through his age-29 season to a deal that guarantees him $7.35 million next year and $10.35 million the following, with a pair of additional option seasons.
If he turns out to be only a fourth outfielder on a contending team, that salary level probably wouldn’t be too hard to swallow or prove an impediment to making other needed additions. The contract might also make him more attractive to another club as a trade candidate at some point.
But where does all of that leave this current Phillies team as far as the starting center field position? Good ball clubs are generally built up-the-middle: catcher, second base, shortstop, center field.
“I’m not making any long-term declarations of who the every day center fielder is going to be because, we don’t have one right now.”
That was Kapler’s statement this morning on local Philly sports talk station 94.1 WIP. For the Thursday series finale at Wrigley Field, the skipper has Herrera back in the starting lineup in center field. If the 27-year-old “El Torito” cannot find his stroke, and fast, it is going to make holding on to first place much more difficult in the coming weeks.
Originally published at Phillies Nation as “Gabe Kapler on Phillies everyday center fielder: ‘We don’t have one right now’“