Cubs walkoff the Phillies with rally in bottom of the 9th

The host Chicago Cubs (28-18) rallied to a 3-2 walkoff victory over the Philadelphia Phillies (28-20) by scoring a pair of runs in the bottom of the 9th inning on Tuesday night at Wrigley Field on Chicago’s North Side.

The Cubs got on the board first thanks to the aggressiveness of Kris Bryant. The Cubs third baseman singled with one out in the bottom of the 1st inning and moved to second when Anthony Rizzo followed by drawing a walk.
Both runners were moving as Willson Contreras grounded to short, keeping them out of the doubleplay. The move paid off doubly as Bryant never stopped running while Jean Segura threw to first. Bryant slid in to home plate just ahead of the throw from Rhys Hoskins to give Chicago a 1-0 lead.
The Cubs nearly put another on the board in the home 4th inning. With two outs, Kyle Schwarber drew a walk. Bryant followed with a double down the left field line as Schwarber raced home and crossed the plate.
However, a challenge from Phillies skipper Gabe Kapler went the Phillies way thanks to a “stadium ground rules boundary” ruling that changed the play to a ground rule double. Schwarber was put back at third base, and Eflin then retired Rizzo on a fly out to center to escape trouble. 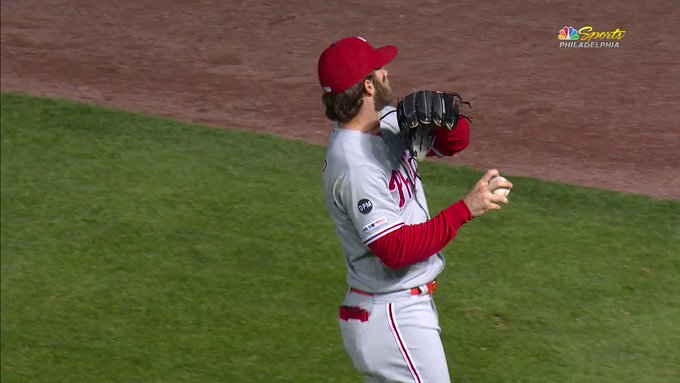 After making the final out in right field in the sixth inning, Bryce Harper trolls Cubs fans and LAUNCHED the ball out of Wrigley Field and on to the rooftop.

Maddon pinch-hit for Quintana in the bottom of the 6th inning. He had stymied the Phillies to that point, but also had reached 100 pitches for just the third time this season. It would prove to be just the opening that the visitors needed.

With Carl Edwards on to pitch in the top of the 7th inning, Cesar Hernandez led off with a looping single to left field. After Scott Kingery hit into a force out, Maikel Franco one-hopped a double off the ivy in left field. Kingery rolled around to third and the Phillies had runners at second and third with one out.
Kapler sent the slumping Odubel Herrera up to hit for Eflin. Herrera ripped a ball back to Edwards, who made a fantastic stab to grab the ball and retire Herrera at 1st base with the runners holding. Maddon then went to a pitching change again, and again it burned him. 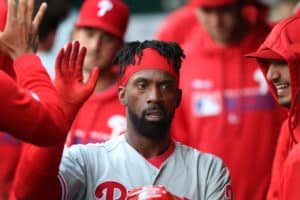 Andrew McCutchen‘s clutch two-out, two-run single in the top of the 7th inning gave the Phillies a 2-1 lead at Wrigley Field on Tuesday night. (Photo by Scott Winters/Icon Sportswire)
Andrew McCutchen stepped in against the new Cubs hurler, righty Brandon Kintzler. The Phillies veteran right fielder jumped on a 2-2 sinker, ripping it up the box for a two-run single that finally put the Phillies on the board with a 2-1 lead.
It was Kapler’s turn to go to his bullpen, and he called on 22-year-old Edgar Garcia for the bottom of the 7th. After surrendering a leadoff base hit to Bryant the young righty retired the next two batters.
Kapler then brought in Jose Alvarez to face the lefty bat of Jason Heyward. Alvarez sawed off Heyward’s bat, getting him to ground to shortstop for the final out. Alvarez then came back out for the bottom of the 8th inning and worked around a couple of baserunners to keep the 2-1 lead intact.
In the top of the 9th inning, Kingery drilled a one-hopper off the ivy in left off Cubs reliever Xavier Cedeno for a one-out double. Maddon then made another bullpen move, bringing in Kyle Ryan. The lefty got Franco to ground out to third base for the second out, then struck out pinch-hitter Phil Gosselin to end the threat.
Kapler brought out Juan Nicasio to try to close it out in the bottom of the 9th with a one-run lead. He promptly broke the baseball cardinal rule, walking Bryant as the leadoff man. Rizzo then followed by ripping a double into the right field corner and the Cubs had the tying run just 90 feet away, the winning run in scoring position at second base, nobody out.
Contreras then lifted a short fly into left field. Harper grabbed it and set to throw home, too shallow for the tagging Bryant to score. Kapler then ordered Heyward walked to load the bases. Almora  dribbled a ball in front of the plate. Nicasio grabbed it, but delivered a weak flip home as Bryant slid in with the tying run.
The next move in the chess match was Maddon’s, and he had a good one available to him. He sent the electric Javier Baez, normally the starting shortstop but out of the lineup the last two nights with a minor injury, up as a pinch-hitter. Baez wasted no time, ripping the walkoff base hit to right field as Rizzo trotted home with the winning run. 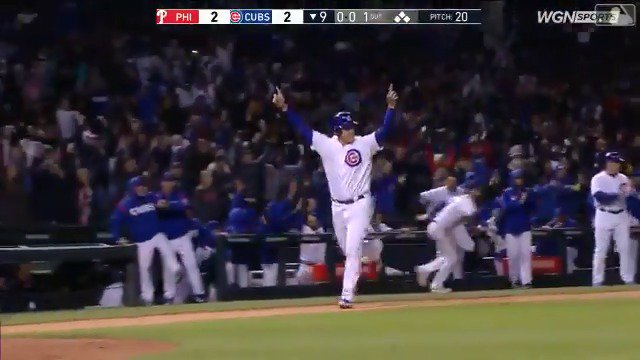 Our 5th walk-off win of the season and the 2nd career walk-off RBI for @javy23baez!#EverybodyIn

2,511 people are talking about this
Twitter Ads info and privacy
On Wednesday night for the first time in his career, Cole Hamels will take the mound to go against the Phillies team with which he won the 2008 World Series.