Phillies need to find a way to slow down Ryan Braun

Ryan Braun has been a Phillies-killer for years

Over the course of his 13-year career in Major League Baseball, outfielder Ryan Braun of the Milwaukee Brewers has done a lot of damage against a lot of opposing teams.

Braun, who served a 65-game suspension back in 2013after admitting to using performance-enhancing drugs (PEDs) during his 2011 National League MVP-winning campaign, has blasted 331 home runs over that career.
The Philadelphia Phillies have been victimized by Braun more than most, to the point that he is now high on the list of “Phillie-killers”, those players who consistently do damage when the two teams meet.
Over 74 regular season games played against the Phillies, 72 of those as starts, Braun is slashing .378/.417/.711 with 25 home runs, 71 RBIs, and 44 extra-base hits with a 1.129 OPS. He even hit the Phillies during the one postseason series between the two clubs. During that 2008 NLDS he delivered five hits and a pair of RBIs. Ironically, he went 0-4 in the lone Brewers victory of that series.
At Citizens Bank Park, Braun has ripped successive generations of Phillies pitching to the tune of a .406/.453/.804 slash line with 14 homers and 43 RBIs over 36 games.
During Tuesday night’s 6-1 victory for the Brewers, Braun crushed his ninth home run of the season. It was just another successful night in South Philly for the now 35-year-old slugger, who is enjoying his best power year since the 2016 season.
In addition to that tainted 2011 NL MVP Award, Braun has finished among the top three in the voting in two other seasons. He was the 2007 National League Rookie of the Year and is a six-time NL All-Star and five-time Silver Slugger.
After manager Craig Counsell sat him out for the previous three Brewers games, using him only as a pinch-hitter, Braun was back in the starting lineup to torture the Phillies last night. Fans who head down to the ball park tonight can expect to see him in there again, looking to continue his onslaught.
The Brewers (25-19) trail the first-place Chicago Cubs by 2.5 games in the NL Central Division race, but are five games back in the loss column. The Phillies (24-17) are 3.5 games up in the NL East Division standings, three in the loss column over the New York Mets.
Coming into this series, the Phillies had been finding a way to win despite consistently dropping their series openers. This time around they won that opener. In order to capture their fourth series in a row the Phillies need to slow down Braun and beat the Brew Crew on Wednesday night in this third of a four-game set.

Golden Globe and two-time Emmy Award-winning actor Bruce Willis has starred in many films shot in the Philadelphia area: “The Sixth Sense”, for which he won a People’s Choice Award, and “12 Monkeys” among them. Willis family moved from Germany, where his father was in the U.S. military service, to New Jersey when he was just two years old. He grew up a Phillies fan in Carney’s Point, New Jersey and was a graduate of both Penns Grove High School and Montclair State University in New Jersey. He is taking batting practice prior to the game tonight and will be throwing out the honorary first pitch.
View image on Twitter 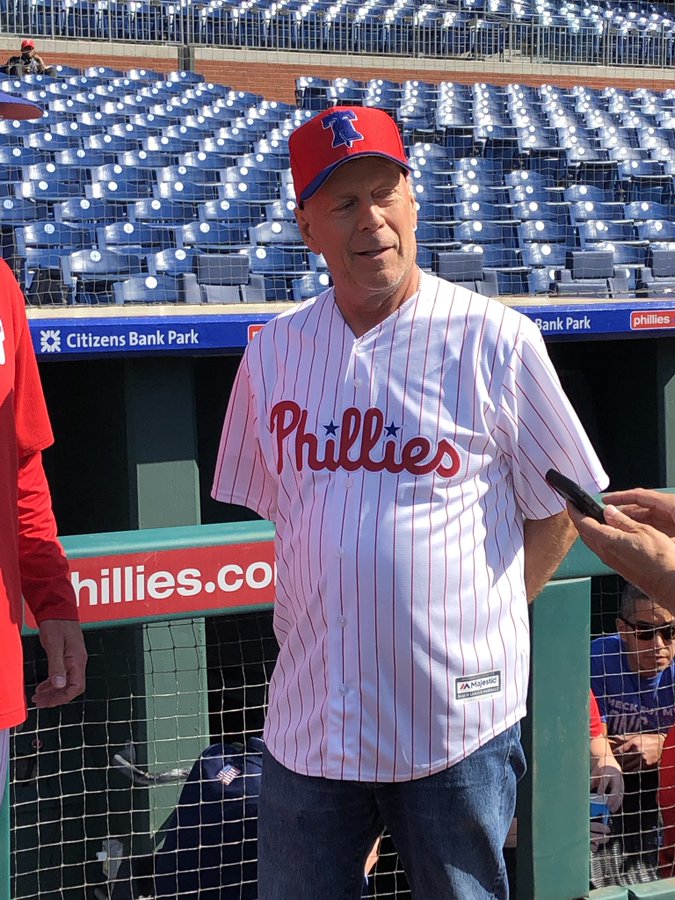 Actor Bruce Willis moonlighting as a pitcher for the Phillies.