Scott Kingery will enter the starting lineup on Sunday

It was less than twenty-four hours ago that we referred to the Phillies manager as “Everyday Gabe” in the headline for Saturday night’s Gameday feature. For that contest, Gabe Kapler ran out the same starting lineup for the 11th time in the season’s first 13 games.

After the Phillies had their doors blown off in a 10-3 defeat, Kapler stated that there would be changes on Sunday. The starting lineup which he has submitted does indeed reveal changes, all at the very bottom of the batting order.
Kapler also stated that Scott Kingery, who doubled in both the 8th and 9th innings last night, would be in the starting lineup today. He is, but not where you might expect.
With second baseman Cesar Hernandez off to a .178/.240/.244 slash line over his first dozen games and 50 plate appearances and producing yet another o-fer on Saturday night, one might expect that Kingery would be playing in his place. However, Kapler has actually moved Hernandez up a spot, from seventh to sixth, in his batting order. Kingery will instead be starting at third base, giving Maikel Franco a rest.
The other change to the lineup and batting order finds Andrew Knapp batting eighth and catching. This will mark the second straight weekend during which J.T. Realmuto has been given a break.
The first five batters in the Phillies order this afternoon will look very familiar to those who have followed the club through the season’s first couple of weeks. 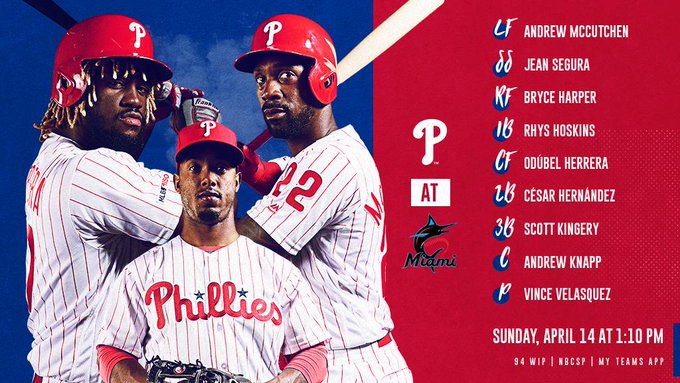 Here’s how we’ll line up for this afternoon’s series finale in Miami. #RingTheBell 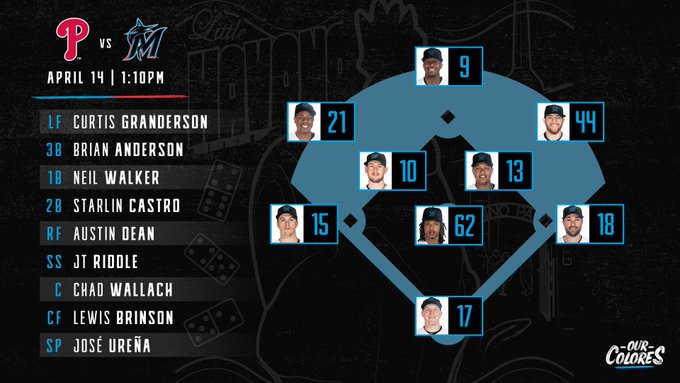 Lining up to take the series.