The division-rival Miami Marlins (4-11) dumped the Philadelphia Phillies (8-5) by a 10-3 score on Saturday night at Marlins Park in South Florida.

The Marlins came in having lost nine of their previous 10 games. But the hosts got on the board early against Eflin, scoring twice in the bottom of the 2nd inning, nearly getting even more.
With one out, Miguel Rojas laced a one-hop double off the wall and Austin Dean singled to center to make it 1-0. Lewis Brinson then ripped a double down the left field line. Dean was waved home as the relay came from Andrew McCutchen to Jean Segura, who double-clutched and threw home to J.T. Realmuto. As Dean slid into the plate, Realmuto dropped the ball, and it was a 2-0 lead for the hosts.
Then in the bottom of the 3rd inning the hosts really got rude with their guests from the City of Brotherly Love. Brian Anderson started it off by crushing a solo homer over the wall in dead-center field to make it 3-0. Neil Walker followed by blasting one way out over the wall in left-center and it was quickly a 4-0 lead.
Eflin nearly got out with just that damage, which was enough as it was. He allowed a one-out single to former Phillies catcher Jorge Alfaro, but then promptly picked him off for the second out of the frame. However, the Fish then got a bloop and a blast to make it 6-0. The bloop was a single to center by Rojas. The blast was a deep homer to left by Dean.
That would be all of the damage against Eflin, who produced a miserable effort after opening the season with a pair of strong outings. Eflin surrendered 10 hits and gave up six runs over his four innings pitched, striking out four. The vast majority of the hits off him were hard-hit balls, including the trio of home runs blasts.

In the bottom of the 5th inning the Marlins put another one on the board, this time off Phillies reliever Juan Nicasio. It began with a hot-shot base hit by Castro, a hard grounder that Cesar Hernandez could not handle. Alfaro then singled to right with Bryce Harper bobbling the ball to allow Castro to roll around to third base. He would then score on a sac fly by Rojas and it was 7-0.
Meanwhile, the lefty Smith was cruising on the mound for Miami. He gave up just one hit on the night, a clean one-out double by Andrew McCutchen in the top of the 3rd inning. Smith was pulled after six shutout innings and 99 pitches. 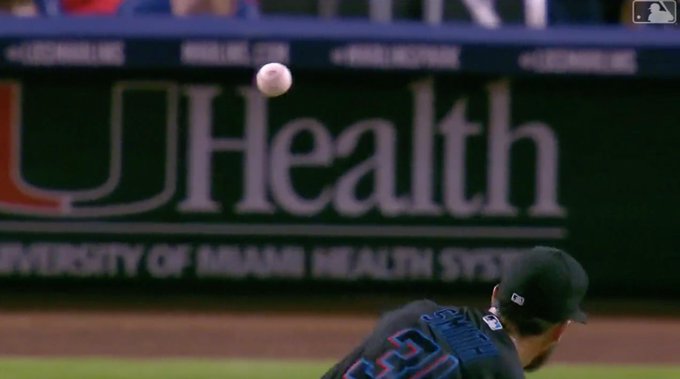 Write it in pen: SIX scoreless innings with one hit on the board for @CalebASmith12. #JuntosMiami

46 people are talking about this
Twitter Ads info and privacy
Nick Anderson followed Smith to the bump and set the Phillies down in order in the top of the 7th, striking out two of the three batters he faced. Tayron Guerrero struck out a pair in the top of the 8th while walking one. He was reached by Scott Kingery for a pinch-double, just the second hit of the game for the Phillies.
In the top of the 9th, the Phillies finally broke through. Rhys Hoskins led off with a double. He would score on a one-out single to right by Odubel Herrera to get the club on the board. After Cesar Hernandez hit into a force out, Kingery rapped his second double in as many innings. When Nick Williams followed with a pinch-double, both runners scored to get us to the 10-3 final score.

Covered all of the ugliness in the game story. Eflin simply didn’t have it tonight. The Phillies starting pitchers as a group have now surrendered 74 hits over their first 69.2 innings, including 15 home runs. That is not good.
On the other side of the coin, the Marlins starter, well…see below.

PHILLIES NUGGETS PLAYER OF THE GAME

Marlins starting pitcher Caleb Smith was brilliant on the night: 99 pitches, 64 of them for strikes. He allowed just one hit over six shutout frames to earn his first victory (1-0) on the season. The lefty has allowed just nine hits over his first 17 innings across three 2019 starts.