Phillies fans are going to have to wait on Mike Trout

If you follow discussions among the Philadelphia Phillies fan base on social media you know that it is difficult to go more than a couple of days without someone admonishing the team to “bring home” the best player in baseball, Mike Trout.

It takes just a glance at the career of the “Millville Rocket” to understand the desire of fans to see the native of that South Jersey town play his home games in the Phillies red pinstripes.
While the Phillies were setting a franchise record with 102 wins during their last winning season back in 2011, Trout was breaking into Major League Baseball with an extended 40-game cup of coffee with the Los Angeles Angels.
During his official rookie campaign a year later, Trout captured the American League Rookie of the Year honors. He slashed .326/.399/.564 that year with 30 home runs, 65 extra-base hits, 49 stolen bases, and 129 runs scored.
Trout has now played in eight big-league seasons. He has been the AL Most Valuable Player twice and finished runner-up for the honors on three occasions. During his seven full seasons the lowest that he has finished in AL MVP voting has been fourth.
Now 27-years-old, Trout has 240 career homers, 648 RBI, 793 runs scored, and 189 stolen bases with a .307/.416/.573 career slash line. The OPS mark of .990 that he has put together during that period is the best in all of baseball. He is also a seven-time American League All-Star and six-time Silver Slugger Award winner.
Trout now has a 64.3 career WAR mark, tied with Roy Halladay for 144th in baseball all-time. With a typical season in 2019 he would move past a couple of dozen Hall of Famers including Halladay, Willie McCovey, Andre Dawson, Craig Biggio, Ernie Banks, Duke Snider, and Roberto Alomar.
Trout has never won a Gold Glove Award and yet is widely considered among the best center fielders in the game. Early in his career, television highlight shows featured him frequently. His everyday excellence in this area of the game simply seems to now be taken for granted.
Trout did not commit a single error last year, the only center fielder in Major League Baseball who can make that claim. In fact, he has not committed an error since April of 2017.
But the affection for Trout extends beyond his phenomenal on-field performance for Philly sports fans. Trout is one of us. He grew up as a fan of Philadelphia sports teams. Trout tailgated at the 2008 World Series. He is one of the biggest fans of the Philadelphia Eagles that you are going to find.
USA Today’s Bob Nightengale reports that when responding to questions about the Phillies current free agent search, Trout showed that he fully understands the passion and interest of the fan base by referencing his own situation.

Mike Trout on #Phillies Free agent search: ‘I didn’t go a day this winter without someone asking, ‘When you coming to Philly.’ I can’t predict the future.’

609 people are talking about this
Despite the enthusiasm and desire of the Philly fan base, it is no slam-dunk that Trout will ever pull on a Phillies jersey for even one day of his career. He remains under contract with the Angels through the 2020 season. Their owner, Arte Moreno, fully understands what Trout means to his organization and is on record that he is going nowhere during his contract.
Moreno has spent plenty of money before and is fully prepared and capable of doing so again. He lured Albert Pujols away from the Saint Louis Cardinals, where the player had become an icon, with a 10-year, $240 million free agent contract back in 2012. Last off-season, Moreno won the Shohei Ohtani sweepstakes, landing the Japanese star for the price of a $20 million posting fee and $2.315 million signing bonus.
The Angels owner has also already demonstrated his specific appreciation for Trout’s value and talents. He bought out the first few years of the superstar’s free agency eligibility with a six-year, $145.2 million-dollar deal covering the 2015-20 seasons. That contract set Trout up for life, kept him with the Halos for most of his prime years, but also allows him to become a free agent at age 29.
Fabian Ardaya, who covers the Angels for The Athletic, asked Trout about possible contract extension talks with the team. It would appear from his response that there are none happening as of this time.

Mike Trout declined to comment on any potential contract negotiations with the Angels. Said he likes where he’s at, and said he wants to win. Said he feels they haven’t been far off.

15 people are talking about this
You can expect that Moreno will make a major push to sign Trout long-term in an attempt to make him an Angel-for-life at some point. As long as there is any chance of that happening, Trout will not be traded. Phillies fans may as well stop hoping for it right now. It just is not going to happen.
It is an entirely different question as to what the Angels should do, as opposed to what they will do. If there are indications that Trout will give them no special consideration in free agency, and if the Angels are not in true contention, then trading him at the 2020 non-waiver deadline would be the smart move. He would likely land them a major package in return.
An even better opportunity would come this summer. Again, if the Angels engage with his agent and learn that he intends to enter free agency, and if the Angels are again not in contention, then dealing Trout this year would land them an even stronger package in return.
But that will not happen. Trust me. You don’t have to like it, you just have to accept it. Moreno will not trade away the best player in baseball, his franchise icon. At least not this year. My bet it that he will not even consider it at next year’s trade deadline.
Trout knows the fan base. Aside from baseball (for now) he is one of us. “I’m an Eagles fan. I know how we are,” he recently said to reporters. 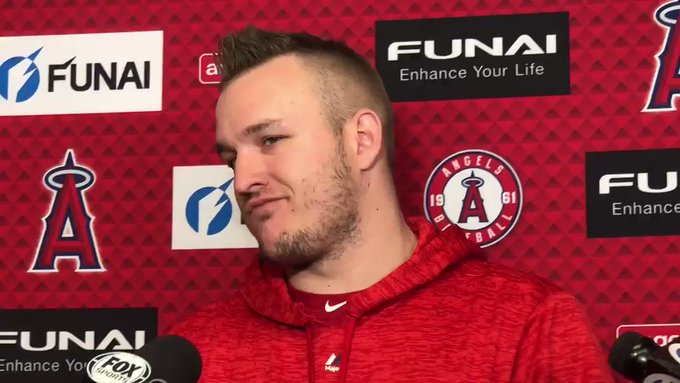 Taylor Rocha@TaylorRochaTV
Why are free agents reluctant to sign with the #Phillies? Philadelphia sports fans are no joke.

15 people are talking about this
Twitter Ads info and privacy
The most likely scenario for Phillies fans, by far, is to simply be patient. Enjoy whatever teams the Phillies run out during this 2019 season and then again next year. And when the 2020 season draws to an end, well, then we can talk about Trout. My guess is that 2020 off-season will make what we have gone through with Bryce Harper and Manny Machado this winter look like child’s play.
Originally published at Phillies Nation as “Mike Trout on joining the Phillies one day: “I can’t predict the future”“