Obtained in trade for an icon, Eflin tries to solidify a rotation spot

Spring has sprung, if not in Philadelphia, then at least down in Clearwater, Florida where the Phillies are working out daily with temperature highs in the 70’s and lows in the 60’s.

There is a great deal of building enthusiasm surrounding the 2019 ball club. A young roster that held first place for much of last summer has been bolstered by an influx of talented veterans. And there remains the exciting possibility that a young superstar could still show up in camp one of these days.
The Phillies are clearly improved in their lineup. Former NL MVP Andrew McCutchen takes over in left field and a pair of All-Stars are now at shortstop and behind the plate in Jean Segura and J.T. Realmuto. The already strong bullpen has added David Robertson and others to a deeper mix.
Whether or not the Phillies are able to bring in one of the young superstars Bryce Harper or Manny Machado, there is a good chance that success or failure in the upcoming season is going to largely depend on the performance of the starting pitching rotation.
Right now that rotation is fronted by young ace Aaron Nola and veteran Jake Arrieta. The former was an NL Cy Young Award finalist a year ago, the latter has won the award during his career. The club’s current #3 and #4 starters, Vince Velasquez and Nick Pivetta, are seen by many as talented arms who could each break out with big seasons this year.
The current fifth starter is often overlooked, but right-hander Zach Eflin has a chance to emerge as a vital contributor to the 2019 Phillies ball club.
A native of Orlando, Florida, Eflin was chosen by the San Diego Padres in the supplemental first round of the 2012 MLB Amateur Draft at 33rd overall. On December 18, 2014, Eflin was dealt to the Los Angeles Dodgers as part of a five-player deal. The very next day the Dodgers flipped Eflin to the Phillies in exchange for an aging Jimmy Rollins. 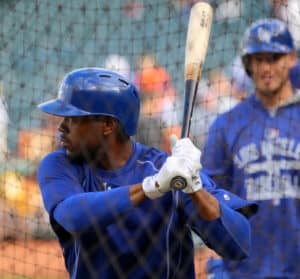 Eflin was obtained by the Phillies as part of the Jimmy Rollins trade with the Dodgers in December 2014. (Arturo Pardavila III/WikiCommons)
He immediately became one of the Phillies top prospects, with Baseball America rating him fourth-best in the organization prior to the 2015 campaign. Pitching that summer at Double-A Reading, Eflin went 8-6 with a 3.69 ERA and was named to the Eastern League all-star team. He also pitched for the silver medal-winning Team USA in the Pan Am Games.
The following season at Triple-A Lehigh Valley, Eflin upped his game. He went 5-2 with a 2.90 ERA, allowing just 49 hits over 68.1 innings across 11 starts with a fabulous 55/11 K:BB ratio. For that performance, Eflin received his first big-league opportunity in early June.
On June 14, 2016, Eflin made his Phillies debut with a start in Toronto. It couldn’t have gone worse. He surrendered nine runs, eight of them earned, over just 2.2 innings in a Tuesday afternoon outing at Rogers Centre. The Jays blasted three home runs among the nine hits off him that day.
Eflin would not let the beating keep him down. Five days later he took the mound again for a start against the Arizona Diamondbacks and pitched into the sixth inning, keeping the Phillies in the game that day.
His next six outings all resulted in a Quality Start, including his first big-league complete game against the Atlanta Braves on July 5 at Citizens Bank Park and his first shutout on July 22 at Pittsburgh. Over a seven-start string he went 3-2 with a 2.08 ERA and .207 batting average against, allowing just 36 hits over 47.2 innings.
Now cementing his place in the Phillies rotation at just age 22, it all came to a sudden, crashing halt. Eflin began to suffer from knee pain, resulting in three consecutive horrendous starts. He would be placed on the disabled list on August 9 with patellar tendinopathy, and within 10 days would have season-ending surgery.
Eflin began the 2017 season still on the disabled list recovering from the surgery, and even upon his return he would struggle. Pitching at three levels, including making 11 starts back with the Phillies, Eflin had an overall 3.74 ERA while allowing 54 hits over 55.1 innings with a 50/15 K:BB ratio that year.
Last year, Eflin was called up from Triple-A on May 1 and remained with the big club for the rest of the season. He would make 24 starts and win 11 games for the Phillies, producing an excellent 123/37 K:BB ratio over 128 innings.
Just last month, Bob Brookover at Philly.com wrote that Phillies manager Gabe Kapler is bullish on his back-end starters, including Eflin, due to their 2018 FIP marks. Eflin had a 3.75 FIP, equaling the number put up by Velasquez. That left the two hurlers ranked 29th among all MLB starting pitchers in the category.
“FIP is more predictive of what will happen next year than ERA is and that’s why we look at FIP more than ERA,” said Kapler, per Brookover. “ERA tells the story of what happened including defense. FIP tells us what might happen going forward.” 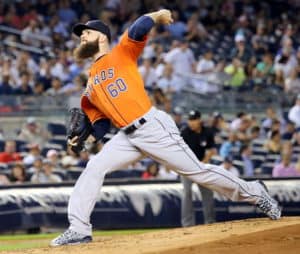 Keuchel remains on the market and has been linked to the Phillies. His signing would complicate Eflin’s role to begin the 2019 season. (Photo: Arturo Pardavila III)
Eflin will turn just 25-years-old right after Opening Day. Even though he spent the last five months of the 2018 season as a member of the Phillies starting rotation, that role is not guaranteed in the coming season.
There are still rumblings that the Phillies could try to add a veteran arm, someone like left-hander Dallas Keuchel, to their starting rotation. There will be spring training competition from Enyel De Los Santos and Ranger Suarez, each of whom made their big-league debut a year ago.
Jerad Eickhoff, the 28-year-old righty who made 65 starts for the Phillies after coming to the club as part of the 2015 Cole Hamels trade with Texas, was limited to just three games and one start last year by various injury issues. Eickhoff had surgery back in October to relieve symptoms of carpal tunnel syndrome.
As our Brandon Apter at PN wrote just days ago, Eickhoff suffered what is hoped to be just a minor setback in his recovery after seeming to be at 100% just last month. He will throw a bullpen session next week and be evaluated after that point.
Acquiring someone like Keuchel would probably result in Eflin beginning the season back at Triple-A, waiting for an opportunity to get up to help the Phillies later in the season. There are also scenarios that could find Eflin becoming a trade chip at some point.
Short of that, Eflin will be expected to contribute key starts for a team hoping to contend. Often overlooked by fans when considering the 2019 Phillies roster, he could very well prove to be a pivotal contributor.
Originally published at Phillies Nation as “Zach Eflin: Phillies pitching rotation forgotten man could prove a vital key“