How might Phillies be affected if the DH comes to the National League?

It’s an idea that has been discussed for at least the last four-and-a-half decades in Major League Baseball. And yesterday that idea of a “universal DH” again arose and spread quickly in discussions across the baseball landscape.

The DH or “Designated Hitter” is not a new concept, nor did the idea begin with its official introduction to the rules of the American League for the 1973 season. The idea of allowing the pitcher to have someone more proficient take their place in the batting order traces back to the earliest days of organized baseball.
As far back as February 3, 1906 the weekly newspaper “Sporting Life” printed the following: “The suggestion, often made, that the pitcher be denied a chance to bat, and a substitute player sent up to hit every time, has been brought to life again, and will come up for consideration when the American and National League Committees on rules get together. This time Connie Mack is credited with having made the suggestion.”
Mack’s suggestion did not gain traction with that rules committee, the press who covered the game, or the general public at that time. But it was an idea that cropped up from time to time. Finally, the pitching dominance experienced in the game as the 1960’s unfolded became impetus for conversations regarding the idea to spark once again.
For the 1969 season, Minor League Baseball began a four-year trial usage of the DH for their games. This led to the American League owners approving in an 8-4 vote the trial use of the DH for three years starting with the 1973 season. It has remained a part of the AL game ever since.
On August 13, 1980 the National League owners held a vote to consider adopting the DH, a measure that was actually expected to pass. With a majority of the 12 NL owners at the time needed to approve, the final vote tally went five against, four in favor, and three abstentions. There has not been another vote for a National League DH since that attempt.
Though the Designated Hitter is used by most other professional leagues around the world, Major League Baseball is not the only place that you will find such a split usage. Japan’s two largest leagues also have a split. The Central League does not utilize the DH, while the Pacific League has used it since the 1975 season.
Yesterday, the issue of a National League DH in Major League Baseball again exploded across social media following the release of an article by MLB insider Ken Rosenthal of The Athletic.
In his piece on negotiations between MLB and the MLBPA, the player’s union, regarding possible rules changes, Rosenthal wrote:

“A universal designated hitter — something the players have sought for more than three decades, according to commissioner Rob Manfred — also was part of the union’s proposal. Under the plan, the National League would adopt the DH for the 2019 season.“

Rosenthal went on to report that the head of the MLBPA, Tony Clark, had stated that the universal DH idea was “gaining momentum” from his perspective. However, Rosenthal went on to quote Manfred on such a change:
“I think the most likely outcome at this point remains status quo…If you get rid of the DH in the National League, there is a brand of baseball — the non-DH brand — that is done…I think there’s going to be hesitation with respect to that.”

Should it turn out that baseball does indeed adopt the DH for both leagues, how might that impact the Philadelphia Phillies in both the short and long-terms?
For one thing, it would mean what is pretty much a dead spot in the batting order would have a far greater chance at success. Five pitchers received more than seven plate appearances in the 2018 season for the Phillies. Those were the team’s main starting pitchers: Aaron Nola (70), Jake Arrieta (50), Zach Eflin (50), Nick Pivetta (45) and Vince Velasquez (45), and none had any success. 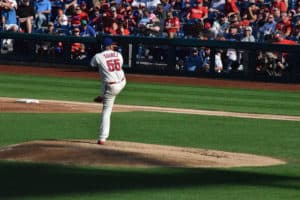 Rookie Ranger Suarez legged out the lone triple among Phillies pitchers in 2018 (Ian D’Andrea/Flickr)
Velasquez fared best, slashing .225/.225/.250, with the next-highest batting average the .133 mark put up by Arrieta. Of the 18 different Phillies pitchers who stepped to the plate only Arrieta and Eflin homered. Nola, Pivetta, and Velasquez each had one double. Rookie Ranger Suarez legged out the lone triple from the pitching staff.
How the Phillies might handle a sudden move to the DH would depend largely on any further roster moves the team might make between now and the start of the regular season. Free agent signings and trades would still appear likely, additions and subtractions that would shake up the DH options.
The most logical beneficiary of a Designated Hitter might be Rhys Hoskins. The move back to first base from left field is certainly going to help him already. However, even at first base, Hoskins is never going to be confused with a Gold Glover.
Assuming that Hoskins plays mostly at first base this coming season, the real short-term beneficiaries would likely come from the current outfielders. As things stand today, Andrew McCutchen is the everyday left fielder.
The lefty-hitting Odubel Herrera and switch-hitting Roman Quinn are competing in center field. In right field you have the lefty-hitting Nick Williams and right-handed bat of Aaron Altherr.
If you assume that Scott Kingery is going to be utilized as a super-sub in 2019 by manager Gabe Kapler, then he is not likely to see much DH action. The club would need to have him available to plug in defensively at up to five positions.
This mixture would probably result in Quinn and Altherr seeing an increase in their at-bats thanks to a Designated Hitter being used in the NL.
Of course, free agent deals involved Bryce Harper and Manny Machado, a trade involving J.T. Realmuto that would ship out any of the above options, and other similar moves would completely shake up the options, the depth, and the dynamics.
Further down the road the existence of a National League DH might benefit someone like 2018 top draft pick Alec Bohm. Currently a third baseman, there are many who see him as a future first baseman.
It may turn out a couple of years down the road that the Phillies have to weigh which hitter between Bohm and Hoskins is the better defensive player at first base, with the other becoming the primary Designated Hitter.
One thing is certain, the move to a universal DH would mean that offense in the National League would increase, just as it did in the American League immediately following implementation there.
Now, would such a change necessarily be a good change? There is much to be said for the strategy to be found within the National League brand of baseball. It appears that Major League Baseball is going to be making some big changes in the next few years. Don’t be surprised if we see the NL actually adopt the DH at some point as one of those changes.
Originally published at Phillies Nation as “A ‘universal DH’ and its possible impact on the Phillies“