In 1902, the new Philadelphia baseball rivalry spilled over to pro football

Today is Super Bowl Sunday, one of the biggest sporting days in the world. It is estimated that well over 100 million people worldwide will tune in to watch the New England Patriots and Los Angeles Rams battle to become this year’s champions of the National Football League at some point.

The game won’t hold the same edge-of-your-seat passionate interest that last year’s game did here in Philadelphia. A year ago, the Philadelphia Eagles defeated New England in a thrilling 41-33 contest to capture the first-ever Super Bowl crown in franchise history.
As soon as this year’s game ends and the last of the chicken wings, pizza, and beer has been consumed here in Philly, local sports fans will begin to much more seriously consider the upcoming Philadelphia Phillies baseball season.
The Phillies pitchers and catchers are scheduled to report to Clearwater, Florida exactly ten days from today for the official start of 2019 spring training camp. The position players will join later that week, and the first game of the Grapefruit League season is scheduled for Friday, February 22.
A fun fact that most Phillies fans are probably not aware of is that there was once a Philadelphia Phillies professional football team in town. In fact, there is a direct link, as the football team was actually owned by the baseball team.
In 1902 a first-ever attempt to form a pro football league took place right here in Pennsylvania. And in fact, that formation was a direct result of the beginning of the baseball wars the previous year with the formation of the new American League.
The Phillies had been in existence as members of the National League since the 1883 season, though they were often referred to as the ‘Philadelphia Quakers’ during their first seven seasons. The NL had been founded seven years earlier, on February 2, 1876. 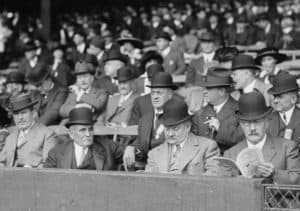 Ben Shibe (2nd from left, front row) was the original owner of the Philadelphia Athletics – both the baseball and football versions. (Bain News Service/WikiCommons)
Founded on January 28, 1901 the American League set out to become an alternative “major league” and expand opportunities for both players and fans to participate in the game at the highest levels.
During the 1901-02 seasons there was outright war between the more established “Senior Circuit” of the NL and the new kids on the block, the “Junior Circuit” of the AL. The two would finally establish a ‘Pax baseball’ following the 1902 season, with establishment of rules regarding player contracts as well as a World Series between champions of the two leagues.
But while that initial war was still being fought, the idea of professional football was brought into the fray. Phillies owner John Rogers started a football team named after his baseball club. Ben Shibe, owner of the Philadelphia Athletics in the AL, decided to start one of his own in response.
Out in Pittsburgh, the Homestead Library & Athletic Club had what was considered the best football team in the nation made up of professional paid players. The team was funded by Pittsburgh Pirates minority owner William Chase Temple, and had not lost a game during either their 1900 or 1901 schedules.
Football promoter Dave Berry took many of those Homestead players and formed a pro team called the Pittsburgh Stars. The team is believed by many to have remained funded by either Temple or the Pirates majority owner, Barney Dreyfuss.

That was the extent of what became known as the National Football League in 1902: the Philadelphia Phillies, Philadelphia Athletics, and Pittsburgh Stars. And to avoid confusion for modern fans, that “NFL” was to have no relation to today’s league.
There were many players who were involved with both the football and baseball teams, and so this led to the football season not opening until early October in 1902. Due to Pennsylvania’s “Blue Laws“, which forbid most activities from being held on Sundays due to religious reasons, all of the 1902 NFL games took place on Saturdays. 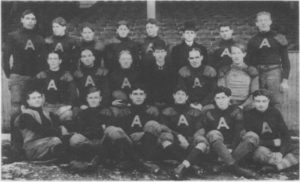 The 1902 Philadelphia Athletics pro football club was owned by Connie Mack and the American League’s Philadelphia Athletics baseball club. (unknown/WikiCommons)
The official schedule was for each team to play the other two times, followed by a championship. At the season’s conclusion, the Athletics and Stars faced off in a match that was being billed as the championship in Pittsburgh on Thanksgiving Day.
After a delay due to payment of the A’s players, the game finally got underway. The game was described as “an even match” where “both teams played their best”, but it settled nothing as the two teams battled to a scoreless tie.
A second game was quickly scheduled to see if a victor could be determined. In that rematch, the Stars came out on top by an 11-0 score. Thus, Pittsburgh would remain the champions of professional football.
The A’s would later defeat the Phillies in a game that was billed as the City Championship, but it was a bittersweet win after the defeat by Pittsburgh. The overall final records for the three teams along with the points for and against were as follows: Pittsburgh Stars (3-2-1, 39-22), Philadelphia Athletics (3-2-1, 34-44), Philadelphia Phillies (3-3, 41-34).
And that was that for the first-ever National Football League. With the settlement of disputes between the National and American Leagues in baseball, the attempt at carrying over the rivalry to pro football died off.
On the baseball diamond, the fledgling Athletics would prove far more successful than those early Phillies as the new century was dawning. The 1902 Phillies went 56-81 while the Athletics went 83-53 and won the second-ever AL pennant.
The actual American pro football league that we know today would not form until 1920 as the American Professional Football Association (APFA), changing to the National Football League (NFL) for the 1922 season.
The Philadelphia Eagles have won the NFL title four times: 1948-49, 1960, and last year’s 2017 championship. The Philadelphia Athletics would win five World Series crowns: 1910-11, 1913, 1929-30. The Philadelphia Phillies have captured a pair of World Series titles: 1980, 2008.

Originally published at Phillies Nation as “Wait, there was once a Philadelphia Phillies – professional football team?”