Earlier this week, I wrote a piece on the current standing of the Phillies best minor league players on recently released top prospect lists. For nearly three decades, one of the most respected of the resources tracking and producing such lists has been Baseball America.

The same day as my Phillies Nation article was released, Baseball America was publishing their own piece on the history of their top prospect coverage. Specifically, the BA staff was re-visiting every prospect ranked either #1 or #2 on their annual Top 100 Prospects list.
Before even bothering to look down the entire list, which covered every top prospect and runner-up since 1990, a thought popped into my head – have the Phillies ever had someone finish in either spot? I follow the prospect game pretty closely and couldn’t recall the team ever having a prospect ranked that highly.
Sure enough, the list revealed that no Phillies prospect has been ranked as the best in all of baseball on the annual Top 100 list. Only one of the club’s prospects has ever found themselves in the #2 spot. That would be Pat Burrell back in 2000.
A look around the National League East Division reveals that the Atlanta Braves have seen five of their prospects ranked as the best in the game: Steve Avery (1990), Chipper Jones (93), Andruw Jones (96-97), Jason Heyward (2010), and Ronald Acuna just last year. Jones was also the #2 prospect of 1994.
The Washington Nationals/Montreal Expos organization has produced a pair of top prospects: Cliff Floyd (94) and Bryce Harper in both 2011 and 2012. While still in Montreal, Vladimir Guerrero was the #2 prospect in 1997. After the franchise had moved to D.C., Stephen Strasburg finished in the runner-up slot for 2010.
Two of those divisional rivals, the New York Mets and Florida/Miami Marlins, have fared even worse than the Phillies in placing prospects at the top of the ranking lists.
The Mets had Paul Wilson rank #2 in 1996. Wilson pitched just one disappointing season in the Big Apple at age 23 in 1996 before his career was derailed for four years by injuries. He finally recovered enough to appear in parts of three seasons with Tampa Bay and three more in Cincinnati.
The Marlins, established as an expansion organization in 1993, have never placed a prospect in either of the top two slots on the Baseball America rankings. But despite not joining Major League Baseball until the 1998 season, the best at producing top prospects has been another expansion club, the Tampa Bay Rays.
There have been a pair of Rays at the top: Josh Hamilton in 2001 and Delmon Young in 2006. Five Rays prospects have finished in the runner-up slot: Rocco Baldelli (03), B.J. Upton (04), Evan Longoria (08), David Price (09), and Matt Moore in 2012. 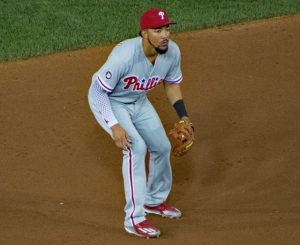