Is Bryce Harper on the verge of announcing his long-term home?

It has been roughly ten days since I last wrote anything regarding the Phillies pursuit of free agents Bryce Harper and Manny Machado. I said that I wasn’t going to write something every time some new rumor popped up, and I’m sticking to that here.

What has me back writing on the topic is not some new rumor that we’re hearing. Instead, it’s what we are not hearing that has me back on the topic.
Regarding the Harper situation, I am finding that the silence is deafening.
When is the last time that you heard or read any rumors regarding Harper from any legitimate, reliable source? It’s been awhile. The usual insiders and talking heads were reporting on claims of some unnamed “source” on a regular basis. Now, those reports appear to have dried up.
Contrast that with the Machado situation, where just this past week it become public knowledge that a new team, the San Diego Padres, had aggressively jumped into the hunt for the young superstar infielder.
It was Kevin Acee of the San Diego Union-Tribune who first broke the story on Friday that the Padres were the “mystery team” in on Machado, something that had been widely speculated for days prior:

“According to multiple sources aware of talks between the sides but not authorized to speak publicly, the Padres are pursuing the 26-year-old superstar with the intention of playing him at third base.”

A.J. Cassavell at MLB.com followed up on Saturday by logically presenting how the 26-year-old would slot into the San Diego present and future, stating “Machado’s fit with the Padres is probably better than it is almost anywhere else.”
Dennis Lin at The Athletic tweeted on Saturday that the Padres were actively seeking a face-to-face meeting with Machado and his representatives.

Sources: The Padres have expressed interest in arranging a meeting with Manny Machado, possibly in Miami. SD would like to get some face time before becoming more involved with the free agent.

645 people are talking about this
What all of this continuing pursuit of Machado tells me is that he has not yet decided. Despite much speculation that his decision was likely down to the Phillies and Chicago White Sox, that appears now to be nothing more than just that – speculation.
If Machado were that close to a decision and in a serious final decision-making process, why suddenly open up what have been months-long visits, considerations, and negotiations?
You would think that he and his reps would simply thank the Padres for their interest, but let the team know that he has been involved in deep considerations with others for weeks, if not months, and was preparing to make a final decision.
To have the process remain open, or to be re-opened, and allow San Diego to become a serious suitor this late says to me that Machado is not as far along in his decision-making process as some sources might lead you to believe.
On the other hand, there is nothing coming out on Harper. The Yankees, Dodgers, and Cubs all appear to be out. The last rumors widely circulating had the process narrowed to the Phillies, White Sox, and his old team, the Washington Nationals.
However, the more you really examine the Nationals and White Sox situations closely, the more neither team appears to be a logical fit.
Washington has already spent a lot this off-season to bring in free agent pitchers Patrick Corbin, Anibal Sanchez, and Trevor Rosenthal. They have looming negotiations with third baseman Anthony Rendon, who can become a free agent next off-season. And the Nats can replace Harper internally with two of the top young outfield prospects in the game in 20-year-old Juan Soto and 21-year-old Victor Robles. 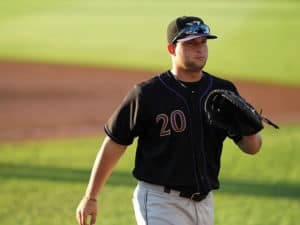 The White Sox signed Alonso, who is Machado’s brother-in-law, earlier this off-season. (BubbaFan/WikiCommons)
The White Sox want to make a splash this off-season, perhaps as much as the Phillies. To that end, they have bolstered their bullpen with the additions of closer Alex Colome and setup man Kelvin Herrera via free agency.
But a strong clue as to the South Sider’s true desires can be found in their free agent position player additions. Chicago has signed both Yonder Alonso and Jon Jay this off-season.
Alonso is Machado’s brother-in-law and Jay is his good friend. As players, both are marginal additions. But as moral support for Machado, friendly faces to make a new locker room more comfortable, they could be invaluable.
What all of this continuing activity and interest in Machado tells me is that no decision is coming soon. What the silence surrounding the Harper situation tells me is the exact opposite.
I believe that it is very possible that Harper has indeed made a final decision. In that case, the silence right now would be due to his agent, Scott Boras, and the signing team going through the “dotting the i’s and crossing the t’s” contract process. With Harper, there are likely to be many details, including bonus incentives, “out” clauses, and both team and player options.
Hey, I could be wrong. But to me, it smells like we may be near an end to the Harper situation. And to me, the Phillies remain the most likely team to be slotting the 26-year-old outfielder into the middle of their lineup this coming season.
On Machado, well, no end appears to be in sight, and I wouldn’t lay money on the Phillies being involved at this point. We shall see.

Originally published at Phillies Nation as “Bryce Harper closer to a decision than Manny Machado?“