Some potential nominees for the 2019 Phillies Wall of Fame honors

Approximately one month from now the Philadelphia Phillies will announce the 2019 honoree who will be enshrined on the franchise Wall of Fame this coming summer.

Last year for the very first time the team honored two individuals, and in a rare occurrence, Phillies fans had no say in either selection. One of those was Pat Gillick, who has served for 14 years as general manager, president, and senior advisor. Gillick was the first “executive inductee” to the Wall of Fame.
The other honored a year ago was former pitcher Roy Halladay, who had died suddenly and tragically in Florida back in November 2017 while piloting his private plane. Publicly released ballots seem to reveal that ‘Doc’ is also about to be enshrined in the Baseball Hall of Fame this coming summer.
Those two joined the manager of the 2008 World Series champions, Charlie Manuel (2014), the organization’s all-time greatest pitcher Steve Carlton (1989), and the greatest player in Phillies history, Mike Schmidt (1990) in becoming the only individuals honored without fan voting as part of the process.
The Phillies had honored no one in the prior summer of 2017. That year, Pete Rose had been scheduled to be enshrined on the Wall of Fame. In early-August, less than two weeks before that was to take place, the club cancelled the ceremony after Rose became embroiled in controversy surrounding allegations that he had sex with a minor while a player with the Cincinnati Reds back in the 1970’s.
Otherwise, the Phillies have honored one individual each year other than 1983. That year an entire “Centennial Team” was named and celebrated in honor of the 100th anniversary of the franchise.
Odds are that one individual will be honored when next month’s announcement is made, so who might that be? One thing that should be obvious is that with an increasing number of worthy individuals now retiring from the 2008 world championship team, we are going to see many of those players enshrined in the coming years.

PARADE TO THE WALL COULD CONTINUE FOR ’08 CHAMPS

Already on the Wall of Fame from that team, joining general manager Gillick and manager Manuel, is outfielder Pat Burrell. The Phillies already have individual ceremonies scheduled for this summer to honor Jimmy Rollins, Ryan Howard, and Chase Utley due to the announcement of their formal retirements as players.
If the honor goes to another member of those 2008 World Series champions this time around, the leading candidates would be Shane Victorino, Carlos Ruiz, Jayson Werth, Brad Lidge, and Jamie Moyer. The favorite might be Victorino after the popular Flyin’ Hawaiian was fetted just last season at Citizens Bank Park upon his formal retirement from baseball.
But the Phillies could also take another tack, choosing to honor some other worthy individuals before beginning what should prove to become a veritable parade to the Wall of Fame for a half-dozen or more of those 2008 players during the decade of the 2020’s.

If the club chooses through their own selection, or through a fan vote, or some combination to honor someone other than a 2008 player, who might be a few worthy candidates to consider?

Before getting into the players, there is one non-player who absolutely deserves consideration. That would be 72-year-old public address announcer Dan Baker.

A native of Philadelphia, Baker became the PA announcer for Phillies games at Veteran’s Stadium beginning with its second season in 1972. His voice has now greeted, entertained, and informed generations of fans over nearly a half-century at both ‘The Vet’ and Citizens Bank Park.
There are eight former Phillies players who, in my opinion, deserve at least some measure of consideration for the Wall of Fame, and who are not associated with the 2008 world championship team. They are: Fred Luderus, Bobby Wine, Ron Reed, Manny Trillo, Scott Rolen, Bobby Abreu, Cliff Lee, and Rose.
Luderus was the Phillies starting first baseman, one of the best in all of baseball during the ‘Dead Ball Era’ of the 1910’s. I have previously championed his cause in a pair of pieces when he was nominated for the Wall of Fame back in 2016 and the previous year.
Now 80 years of age, Wine was the Phillies starting shortstop for much of the 1960’s, winning the 1963 National League Gold Glove Award at the position. After retiring from baseball, Wine joined the Phillies coaching staff. He remained a valuable coach under four managers during the club’s rise to power, serving from July 1972 through the 1983 NL pennant-winning campaign.
Reed already had a dozen big-league seasons under his belt when he joined the Phillies in a January 1975 trade from the Saint Louis Cardinals. Over the next 10 seasons, the tall right-hander became one of the most effective relief pitchers in club history, going 57-38 with 90 Saves and allowing 702 hits over 809 innings. He registered a 3.06 ERA over 458 games with the club, including nine starts. Reed further appeared in 21 postseason games, and recorded a Save in Game One of the 1980 World Series.
Trillo, now 68-years-old, originally signed with the Phillies as an amateur free agent in January 1968 but was left unprotected and was lost to the Oakland A’s in the Rule 5 Draft in December 1969.
He returned to the club as part of an eight-player swap with the Chicago Cubs in February 1979 and became a vital key over the next four years. Trillo won three Gold Gloves, two Silver Sluggers, appeared in three MLB All-Star games, and was the MVP of the dramatic 1980 National League Championship Series. 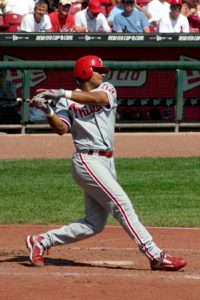 Rolen is 43-years-old and is now the director of player development for the University of Indiana Hoosiers collegiate baseball program. He was the Phillies second round pick in the 1993 MLB Amateur Draft out of high school in Indiana.
Rolen broke into the big-leagues in 1996 and became the 1997 NL Rookie of the Year. He then won four Gold Glove Awards at third base over the next five years and was also an NL All-Star and Silver Slugger winner in 2002, his final year with the club.
Abreu was just 23-years-old when he joined the Phillies in a November 1997 trade with the Tampa Bay Devil Rays. He became an immediate starter with the Phillies, and over nine seasons was a key performer as the club rose from also-ran to contender.
Abreu, now 44, was a 2x NL All-Star, a 2004 Silver Slugger winner, and a 2005 Gold Glove Award winner. He also won the 2005 Home Run Derby at the MLB All-Star festivities. For seven straight seasons he was a 20/20 player, including two 30/30 campaigns.
The 40-year-old Lee is easily the most well-known of these candidates to current Phillies fans. He was already an AL Cy Young Award winner when he arrived from the Cleveland Indians in July 2009 as part of a six-player deal.
After he led the Phillies back to the World Series that October, GM Ruben Amaro dealt him away on the same December 2009 day that Halladay was acquired. But Lee chose to return when the became a free agent a year later, and was part of the 2011 ‘Four Aces’ starting rotation that led the Phillies to a franchise-record 102 regular season victories.
Over parts of five seasons with the club, Lee put together a 48-34 record with a 2.94 ERA, 2.85 FIP, and 1.089 WHIP. He allowed 777 hits over 827.1 innings with an incredible 6.56 K:BB ratio. Lee was also a 2x NL All-Star with the club, and finished top six in the NL Cy Young Award voting.
And then there is Rose. As with the Baseball Hall of Fame, on playing credentials alone he is worthy of the Phillies Wall of Fame. He was the first-ever big Phillies free agent signing in December 1978 and was an NL All-Star each of the next four years with the club.
Rose won the 1981 NL Silver Slugger at first base, received NL MVP votes twice including a top ten finish in that 1981 campaign, and has been credited with pushing the Phillies over the hump to the 1980 world championship.
As for the allegations of statutory rape, Rose continues to deny them. Would the Phillies ever re-open his Wall of Fame case during this current “Me Too” movement era? Despite America supposedly being an innocent-until-proven-guilty country, that is likely a longshot.

Will the 2008 World Series championship team continue to be honored with another member getting a plaque on the Phillies Wall of Fame later this summer? Will one of the worthy non-2008 players finally find their way on to the Wall of Fame? Will fans even get a say in this year’s selection process? Those questions will be answered in the coming weeks.

Originally published at Phillies Nation as “As Phillies prepare to honor a parade of 2008 players, who else deserves the Wall of Fame?“