Harper may be baseball’s prized free agent, and he appears to be narrowing his options

As the week rolls along at baseball’s Winter Meetings in his hometown of Las Vegas, Nevada, the rumors and the speculation regarding free agent outfielder Bryce Harper are going to be coming at us non-stop.

The Philadelphia Phillies interest in the 26-year-old superstar is no secret. There is need for a legitimate middle-of-the-order power hitter. There is no one in the Phillies outfield picture who would block him. There is plenty of money to meet any level of contract demand. And there is also a need for a drawing card, someone who will put fannies in the stands.
Harper’s agent is Scott Boras, and there is no doubt that he is going to be looking for the best possible financial deal. Of course, where Harper himself actually wants to play is going to be the bottom line. The money is going to be huge, no matter which team signs him.
So who else besides the Phillies would have interest when you consider those club’s financial, personnel, and other situations? The two biggest competitors emerging now would appear to be the Chicago White Sox and Los Angeles Dodgers.
Speculation regarding the Dodgers surrounds the glitz and glamour of Los Angeles. Harper is a star who was seemingly made for Hollywood. Also, the Dodgers are a World Series contender right now.
The Dodgers have won six straight NL West crowns, have played for the National League Championship three straight years, and reached the World Series in each of the last two seasons.
Also, Los Angeles is pushing to get a trade done with the Cleveland Indians for ace Corey Kluber. Pairing him with Clayton Kershaw at the top of the rotation and adding Harper as a free agent would make the Dodgers favorites to win a third straight NL pennant in 2019. 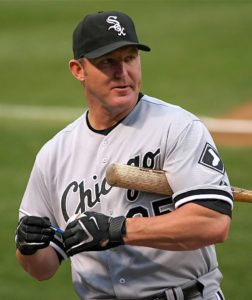 Phillies Wall of Famer Jim Thome took part in a sales pitch to Harper on behalf of his 2006-09 Chisox club.
The White Sox are more of a dark-horse entry. The polar opposite of the Dodgers success, the Chisox have finished in fourth place for five straight seasons, and came in fifth (last) the year before that run. It’s tough to envision why Harper would want to join a losing team.
However, owner Jerry Reinsdorf and general manager Rick Hahn have been reportedly trying to sell Harper on their rebuilding plan. They are hoping that Harper will see himself as the key piece to a franchise that will become elite during the 2020’s, when he would be playing the bulk of his contract.
Hahn’s sales pitch included Baseball Hall of Famer Jim Thome. The Phillies dealt their future Wall of Famer to Chicago and the slugger spent the majority of the 2006-09 seasons on the South Side. Ironically, Thome also played with both the Phillies and Dodgers.
That sales pitch from Hahn was quoted as follows by NBC Sports Chicago: “…these guys are professionals and they understand deep nuances about each individual franchise…the idea of potentially being part of a winner in Chicago has very broad appeal…There’s an allure not just to winning in this city. But there’s an allure of being part of building something that’s potentially sustainable and potentially great…Year 2 of a rebuild I don’t think really plays a huge role in the decision-making process of what a player is buying into in terms of the long term future.”
The door has apparently closed on two other major contenders for Harper’s services. The Washington Nationals have made other moves this off-season to bolster their team. The Nats also have a pair of young phenoms in Juan Soto and Victor Robles ready to step into their outfield at far less cost than Harper.
Just this afternoon, Nationals GM Mike Rizzo told MLB Network radio that “We haven’t close the door on Bryce Harper.”
But owner Mark Lerner stated the following just two days ago per ESPN: “I really don’t expect him to come back at this point. I think they’ve decided to move on. There’s just too much money out there that he’d be leaving on the table. That’s just not Mr. Boras’ M.O. to leave money on the table.”
The Yankees made a big, expensive move last off-season to bring in an outfielder when they traded for Giancarlo Stanton. With Stanton and Aaron Judge locked in for the long-term, that’s two spots. And New York still has veterans Aaron Hicks, Jacoby Ellsbury, and Brett Gardner around, as well as young Clint Frazier.
The speculation regarding the Yankees had been that Harper could become their first baseman. After all, he is extremely athletic and broke into the game as a catcher. But Mark Feinsand of MLB.com just Tweeted out today that Yankees GM Brian Cashman isn’t feeling it.

Asked about Bryce Harper, Brian Cashman rattled off the names of his six outfielders and said there’s no spot. Reiterated that playing Harper at first base isn’t an option for the Yankees.

454 people are talking about this
Twitter Ads info and privacy
It appears to be down to three major cities: Philadelphia, Chicago, Los Angeles. The East coast, the upper Midwest, the West coast. A Phillies team ready to emerge as a winner with the right additions. A White Sox club struggling through a rebuild. A Dodgers squad already there and perhaps just one piece away from a championship.
I can almost assure you of this: Boras is not going to rush into a deal. It is highly unlikely that anything happens this week other than he and Harper meeting further with teams.
Boras will play this out for as long as it takes to feel confident that all of the possibilities have been exhausted. He’ll make sure that some other team, such as the NL Central rival Cubs and Cardinals, or perhaps Arte Moreno and the Angels, doesn’t suddenly decide to jump in with both feet. Then he will narrow it down to the final two or three clubs and Harper will make his decision.
My bet is that we will get a decision before Christmas, but not during these Winter Meetings. That makes next weekend and the following week as the most likely time for a Harper deal.

One key sign? Machado signing somewhere. I am also going to bet that Boras waits for the shortstop to set the big-ticket contract market, and then look to top it.