The Philadelphia Phillies and Seattle Mariners appear to be on the verge of a significant trade. If the rumors are true, this deal should be announced at some point later today.

In the deal, the Phillies would reportedly be sending first baseman Carlos Santana, young shortstop J.P. Crawford, and possibly a prospect to the Mariners in exchange for shortstop Jean Segura and a relief pitcher.
Assuming the deal is indeed completed, this would be the 11th trade between the Phillies and Mariners. It would mark the 16th transaction overall involving the two clubs dating back to even prior to Seattle playing their first-ever game as an expansion team in the 1977 season.
In that initial Philly-Seattle transaction on November 6, 1976, the Mariners purchased the contract of pitcher John Montague from the Phillies. It would be the last transaction involving the two clubs for nearly seven years.
On July 29, 1983 the Phillies purchased a 29-year-old righty relief pitcher from Seattle, one who would help them nail down the 1983 NL East crown and National League pennant. That reliever would spend parts of the next three years with the Phillies before a trade to Houston.

He would return as a free agent to help the 1993 Phillies win their next NL pennant, and has grown to become a beloved figure as a broadcaster with the team. I’m talking about none other than ‘LA’ himself, Larry Andersen.

More than four years later the Phillies and Mariners completed their first-ever actual trade. The Phillies sent popular veteran outfielder Glenn Wilson and a reliever who would become one of baseball’s best over the next decade, Michael Jackson, to Seattle in exchange for outfielder Phil Bradley and a prospect.

Following a couple of minor deals in the early-1990’s, the next interesting Phillies-Mariners trade came at the non-waiver deadline in the 1996 season. Veteran lefty starter Terry Mulholland was dealt to the Mariners in exchange for shortstop prospect Desi Relaford.
Mulholland and another lefty obtained by Seattle from the Boston Red Sox that year, Jamie Moyer, would help a Seattle team that featured Ken Griffey Jr. Alex Rodriguez, and Edgar Martinez make a late charge before finishing in second place to the Texas Rangers in the AL West. Relaford became the Phillies starting shortstop for a couple of years before yielding the position to Jimmy Rollins.

There were a couple of minor deals between the two teams over the next few years, but it would be a decade before another impact trade. That one came down on August 19, 2006 when the Phillies obtained Moyer for a pair of inconsequential prospects.

Moyer would become a key starter with his hometown team as the Phillies won the first four of what would be five consecutive NL East crowns. The crafty veteran lefty was a member of the starting rotation with the back-to-back National League pennant winners, including the 2008 World Series champions. 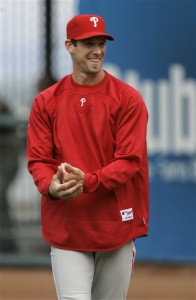 A little more than three years later the two clubs swung another big deal involving a left-handed starter. This time it was the Mariners getting the better of the deal when they acquired Cliff Lee in exchange for three prospects, none of whom ever made an impact with the Phillies.
The Lee trade is considered one of the best in Mariners history. Meanwhile, for Phillies fans it was bittersweet, coming on the same day that the club had acquired Roy Halladay in a trade with the Toronto Blue Jays.
Lee would ultimately return a year later as a free agent. He would finally team with Halladay and help the 2011 Phillies compile the best regular season record in franchise history as a member of the ‘Four Aces’ rotation with Cole Hamels and Roy Oswalt.
That Lee trade nearly a decade ago is the last significant deal between the two organizations. There has been one prior trade between the two teams during the terms of current general managers Matt Klentak and Jerry Dipoto.
On March 11, 2017, Klentak sent a minor league first baseman named Joey Curletta to Dipoto and Seattle. In exchange the Phillies GM received ambidextrous reliever Pat Venditte, who is now a free agent.

Sometime on Monday we will get the details of the latest trade between the Phillies and Mariners. While the two clubs don’t make many deals, they have proven significant on occasion. Only time will tell whether this deal falls into that category or proves relatively insignificant over the long haul.