What if the Phillies are unable to land any impact talent this off-season?

One of the most highly anticipated and important ‘Hot Stove’ seasons in Philadelphia Phillies history is about to get underway. Dozens of players across baseball are now free agents, and by this weekend they will be able to negotiate with the Phillies and other ball clubs.

The Phillies have a ton of money to spend. It is possible that controlling owner John Middleton and his partners could make upwards of $100 million available to GM Matt Klentak in order to add new players via free agent signings and/or trade acquisitions.
There has been a great deal of speculation among the fan base on which players the Phillies might target. Bryce Harper? Manny Machado? Craig Kimbrel or another elite reliever? Patrick Corbin or some other proven starting pitcher?
For a variety of reasons, both the team itself and those of us who cover the Phillies like to talk and write about the possibilities. Adding the right couple of players, after all, could vault the club to contending status entering the 2019 season.
That kind of talk is exciting. It gets us excited. It gets fans excited. When fans are excited, they like to read about the team. Obvious then why we writers like to drum up scenarios in which the Phillies sign talented ball players.
But just once, and only once because I too like to remain positive, let’s whisper softly the words that no one really wants to consider: what if the Phillies are unable to sign anyone this off-season? By that, I mean anyone of consequence. No Harper. No Machado. No Kimbrel or Corbin or Josh Donaldson or J.A. Happ?
This is, after all, a very real possibility. While the Phillies indeed have tremendous financial resources available, they are not the only team with such resources. They are not the only team that wants to get better on the field. They are not the only team that would like to add a drawing card to their roster.
Let’s say that Clayton Kershaw stays with the Los Angeles Dodgers. The two sides have already agreed to extend their negotiating window by a couple of extra days in hopes of working out an extension. That is a very strong possibility.
And let’s say that Corbin ends up going home to the New York Yankees, which seems a foregone conclusion in the minds of many evaluators. That would be two prime arms off the market. 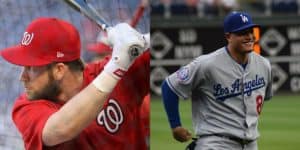 Imagine a scenario in which the Braves get Harper and the Brewers get Machado. Two NL contenders improve. (Arturo Pardavila III and Ian D’Andrea)
Who else might be a serious suitor for Harper and Machado? There are a number of possibilities. Among contending teams, the Milwaukee Brewers and Atlanta Braves appear to be in just as good a financial position as the Phillies.
The Braves are already ahead of the Phillies as the two teams build back from a half-decade of losing. Atlanta won the division going away this year and have some fascinating young talent. Let’s say they add a big basher like Harper to their lineup.
Let’s say the Brew Crew decides to dangle a boatload of cash at Machado in order to get him to give up his shortstop ambitions and play third base for them. And that’s just two competitors. There will be more suitors for both players.
Happ, Kimbrel, Donaldson, Andrew McCutchen, Dallas Keuchel, Nathan Eovaldi all decide they would rather play elsewhere.
You see, it takes more than having a lot of money to throw around. It takes someone on the other side willing to accept your money. There’s an old saying: it takes two to tango. Maybe the players take a look at what the Phillies have and simply don’t see enough opportunity to win.
Players love money. We all do. But the vast majority of competitive ball players also want a legitimate opportunity to play in October. To experience the joy of winning a World Series. To earn a ring. To ride on a parade float.

Phillies fans will rake Matt Klentak over the Hot Stove coals if he can’t get big things done this off-season.
What if Middleton and Klentak cannot convince any of the better free agents to sign on with the 2019 Phillies? So maybe you come to spring training with the same young players who spent much of 2018 playing down at Citizens Bank Park.
Maybe you add a second-tier free agent to the mix, someone like lefty pitcher Gio Gonzalez or a 33-year-old Carlos Gonzalez. Or, gulp, Freddy Galvis to improve your defense at shortstop.
How would Phillies fans feel – how would you feel – if Gabe Kapler‘s 2019 lineup on Opening Day was made up of Carlos Santana, Scott Kingery, J.P. Crawford, Maikel Franco, Jorge Alfaro, and some outfield mix of Odubel Herrera, Aaron Altherr, Roman Quinn, Nick Williams, and Rhys Hoskins?
Do you think that the Phillies could expect to overtake the Braves and Nationals and hold off a re-tooling Mets squad simply with individual improvements from their own young players? Because I can guarantee you, that is how it would be sold to you.
The Phillies finished in third place on merit this past season, and barely at that. Had the Mets been healthy all year, the Phillies would likely have finished in fourth place. Those are the facts.
The Phillies had one of the worst defensive teams in baseball, and Klentak today alluded to Hoskins returning to left field and another year of a further aging Santana as his first baseman. The Phillies had one of the worst run-producing lineups in the game. How much does that improve if no impact players are added to the mix?
And so, you see what I am getting at here. You see how important the Phillies signing a couple of impact players is for this off-season. Not one. At least two. Because if the Phillies brass should crap out, well, that worst-case scenario would indeed be bleak.

Originally published at Phillies Nation as “Phillies 2019: the worst-case scenario could be bleak“