Important off-season dates for the Phillies and Major League Baseball

It has finally arrived, one of the most anticipated Major League Baseball off-season periods in years. Fans of the Philadelphia Phillies have been led to believe that the team will be a major player in the free agent market during this ‘Hot Stove’ season.
As of 9:00 a.m. EDT on Monday morning the contracts expired for dozens of players. They are now free to negotiate for deals covering 2019 and beyond. Their former team has exclusive negotiating rights for the first five days. After that, it’s on to the open market.
The list of available names at this point includes Bryce Harper, Manny Machado, Josh Donaldson, Craig Kimbrel, Michael Brantley, Patrick Corbin, Andrew McCutchen, Dallas Keuchel, and World Series MVP Steve Pearce among dozens of others.
The list of big names could increase by midnight on Halloween, as star pitchers Clayton Kershaw and David Price have until that point to decide whether or not to exercise player options on their contracts. If either or both turns down the option, they would also join the free agent ranks.
A number of players who appeared with the Phillies during the last few years are also available as free agents. That list includes Freddy Galvis, Wilson Ramos, Asdrubal Cabrera, Clay Buchholz, Charlie Morton, and Jake Diekman.
Other names available on the market and very familiar to Phillies fans from their time with the team include outfielder Hunter Pence, starting pitcher J.A. Happ, and reliever Ryan Madson. The latter two own World Series rings from the Phillies 2008 championship team.
Here is an exhaustive list of the important dates to look for as we move through the MLB off-season and into the start of the 2019 season:
OCTOBER 31: Halloween. Okay, okay. Besides candy, the majority of contract options must be exercised by teams or players for the following season. Already picked up were team options on players such as Madison Bumgarner and Carlos Carrasco. Shortstop Elvis Andrus exercised his player option. The big name here is Clayton Kershaw with the Dodgers. He has until the clock strikes midnight after the trick-or-treaters are tucked in bed to make his decision.
NOVEMBER 2: This is the deadline by which MLB teams must tender a qualifying offer (click link for detailed explanation) to eligible free agents. The one-year offer this season would be for $17.9 million. For example, the Nationals could make a qualifying offer to Harper. He could accept and play with them next year on a contract worth $17.9, or decline and become a free agent. If a qualifying offer is made, players have 10 days maximum to make their decision. However, players acquired in mid-season deals cannot have such an offer made. Therefor, the Dodgers cannot make a qualifying offer to Machado. He is automatically headed to free agency. 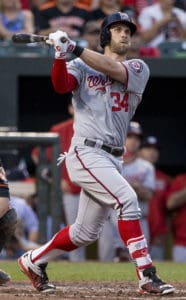 Phillies are expected to be major players in the bidding for free agent Harper.
NOVEMBER 3: The date on which the full and open free agency period will begin. This would, for instance, be the earliest that the Phillies could formally negotiate with Harper or Machado. It is also the earliest that free agents can sign with a new team, though you won’t see that happen in most instances since the player would need to negotiate a contract first. That would likely happen after entertaining multiple offers.
NOVEMBER 4: Rawlings and Major League Baseball will announce the winners of the 2018 Gold Glove Awards.
NOVEMBER 5: Finalists will be announced by MLB for each of the major awards, including the Most Valuable Player in each league, the Cy Young Award, the Rookie of the Year, and Manager of the Year. Also, the MLB Executive of the Year will be announced on this date.
NOVEMBER 6-8: GM meetings held in Carlsbad, California. Big deals don’t usually happen here, but the groundwork is often laid for those consummated later, including at the later Winter Meetings.
NOVEMBER 7: Winners of the Wilson Defensive Players of the Year announced.
NOVEMBER 8: Silver Slugger Award winners announced.
NOVEMBER 8-15: MLB Japan All-Star Series tour with games against stars from NPB.
NOVEMBER 11: The IBWAA (Internet Baseball Writers Association of America) begins announcement of their annual MLB award winners with the AL & NL Top Relief Pitcher honors. The IBWAA will announce their further award winners over the next few days on the same schedule as the BBWAA.
NOVEMBER 12: The BBWAA official NL and AL Rookie of the Year Awards announced.
NOVEMBER 12: Deadline for free agents to accept or reject any qualifying offers that may have been extended. Those who accept will play for their 2018 ball club again next season at a $17.9 million salary. Players who reject the offer will have draft pick compensation attached to any new team signing them as a free agent.
NOVEMBER 13: The NL and AL Manager of the Year Awards announced. 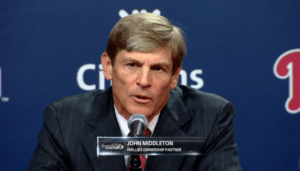 Principal owner John Middleton will take part in the owner’s meetings. He will have some big financial decisions to make this off-season.
NOVEMBER 14: The NL and AL Cy Young Awards announced.
NOVEMBER 14-15: MLB owner’s meetings held in Atlanta, GA. Usually just off-field matters discussed here.
NOVEMBER 15: The NL and AL Most Valuable Players announced.
NOVEMBER 19: The NL and AL Comeback Players of the Yearannounced.
NOVEMBER 20: The AL Designated Hitter of the Year Award announced. Also, my birthday, a far more important event.
NOVEMBER 20: Deadline for MLB teams to add eligible minor league players to their 40-man roster in order to protect those prospects from the Rule 5 Draft.
NOVEMBER 26-29: Meeting of the MLBPA in Dallas, TX. The player’s union key figures are already gearing up for the expiration of the current CBA, which still has three years to run.
NOVEMBER 30: The non-tender deadline. This is the deadline for teams to offer contracts to arbitration and pre-arbitration eligible players.
DECEMBER 9: The Baseball Hall of Fame’s “Today’s Game” committee (1988-present) gets their turn this year. This is the date on which they will announce whether or not they have selected anyone from that period for enshrinement. Leading contenders being considered include Mark McGwire, Will Clark, David Cone, and Bret Saberhagen.
DECEMBER 9-13: 2018 Winter Meetings will take place at the Mandalay Bay Resort & Casino in Las Vegas, NV. 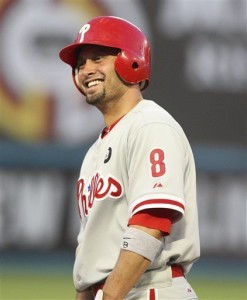 The Flyin’ Hawaiian was a big pickup for the Phillies in the December 2004 MLB Rule 5 Draft.
DECEMBER 13: Rule 5 Draft. The Phillies have cashed in big at previous Rule 5 Drafts with players including Grover Cleveland Pete Alexander, Shane Victorino, Pinky Whitney, Clay Dalrymple, and Odubel Herrera.
JANUARY 8-13, 2019: Phillies Vacation to Paradise trip to the Bahamas. Six days at the Royal Bahamian Resort & Spa with Greg Luzinski, Rhys Hoskins, Scott Kingery, the Phanatic, and more.
JANUARY 11: Contract salary figures must be exchanged by this date between teams and those players eligible for arbitration. Despite the exchange of arbitration figures, the teams and players are still free to continue negotiating to try and reach an agreement up until the actual arbitration hearing. Those will take place at individual dates set by the arbitrators.
MID-JANUARY 2019: Results of the voting by the BBWAA for the Baseball Hall of Fame class of 2019 will be announced. Leading contenders for enshrinement include Mariano Rivera, Edgar Martinez, and Mike Mussina. Among the interesting candidates who should receive wide support are Barry Bonds, Roger Clemens, and the late former Phillies star pitcher Roy Halladay.
FEBRUARY 1-20, 2019: Salary arbitration hearings will take place during this period.
FEBRUARY 13, 2019: Spring training camps open for most teams with pitchers and catchers due to report.
FEBRUARY 21, 2019: Play begins in the Cactus League in Arizona. 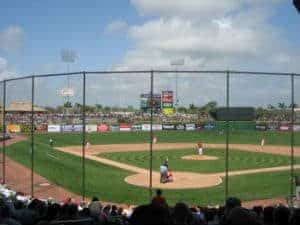 Before you know it the Phillies and their fans will return to Clearwater, Florida for spring training 2019.
FEBRUARY 22, 2019: Play begins in the Grapefruit League in Florida. The Phillies will open play that afternoon by visiting the Tampa Bay Rays at the Charlotte Sports Park in Port Charlotte, Florida.
FEBRUARY 23, 2019: Phillies first home spring training game at 1:05PM EST hosting the Pittsburgh Pirates at Spectrum Field in Clearwater, Florida.
MARCH 20-21, 2019: MLB Opening Series in Tokyo, Japan between the Oakland Athletics and Seattle Mariners.
MARCH 23, 2019: Ninth annual Phillies Charities 5K.
MARCH 25, 2019: Phillies close spring training by hosting the Tampa Bay Rays at Spectrum Field in Clearwater, Florida.
MARCH 28, 2019: Opening Day for the Phillies and all other teams across Major League Baseball. The Phillies will open up by hosting the defending NL East champion Atlanta Braves at Citizens Bank Park.
Keep following us here at Phillies Nation all during the fall and winter months. We’ll be covering and giving our take on all of the top news regarding the ball club, especially any free agent signings. You’ll also get to enjoy a number of Phillies history pieces over the off-season, including my own “Philography” series of Phillies biographies.
Originally published at Phillies Nation as “Phillies and MLB important off-season dates and events“