The Cincinnati Reds have announced that former Philadelphia Phillies third baseman David Bell has been named as their new manager. Bell will be introduced to the Cincinnati fans and media at a Monday press conference.

The 46-year-old Bell signed a three-year contract with a club option fourth season in 2022. He and his father, former big-leaguer Buddy Bell, become the fourth father-son combination to manage in Major League Baseball.
Bell was already an eight-year big-leaguer when he signed with the Phillies as a free agent for the 2003 season. He, first baseman Jim Thome, and closer Billy Wagner were brought in specifically to help the Phillies try to contend as they transitioned from Veteran’s Stadium to Citizens Bank Park.
Over parts of four seasons with the Phillies, Bell slashed .258/.331/.385 with 38 home runs, 209 RBI, and 191 runs scored. On June 28, 2004 at Citizens Bank Park, Bell became the 264th player in MLB history and the eighth and most recent player in Phillies history (Chuck Klein did it twice) to hit for ‘The Cycle’ (a single, double, triple, homer in same game.)
Bell was dealt away by the Phillies to the Milwaukee Brewers at the 2006 trade deadline. He would then play the final 53 games of that, his final season, with the Brewers.
Overall, he played in a dozen MLB seasons with a .257/.320/.396 slash line. Bell produced 123 home runs and 589 RBI over 5,380 plate appearances with six organizations. In 2002, Bell received the Willie McCovey Award as the San Francisco Giants most inspirational player for a team that reached the World Series.
A Cincinnati native, Bell helped Moeller High School win the 1989 Ohio state championship. He also managed for four seasons from 2009-11 in the Reds minor league system, compiling a 227-332 record.
Bell became the Chicago Cubs third base coach during the 2013 campaign. He also obtained managerial experience in 2009 in the Arizona Fall League.
In 2014, Bell became the assistant hitting coach with the Saint Louis Cardinals. For the last three years he served as Mike Matheny‘s bench coach with the Cardinals. 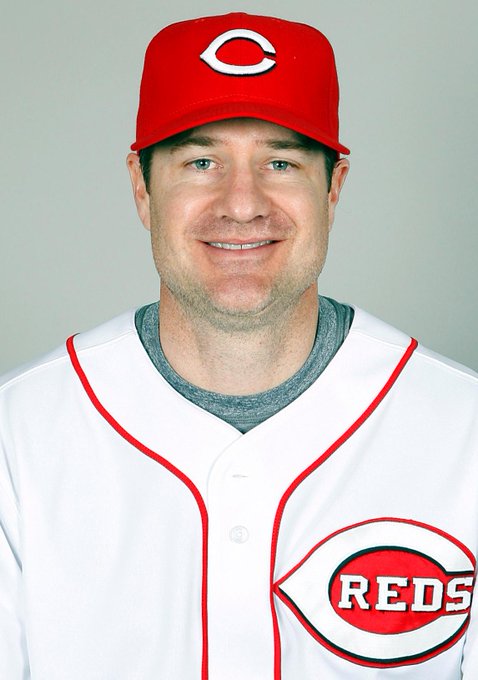 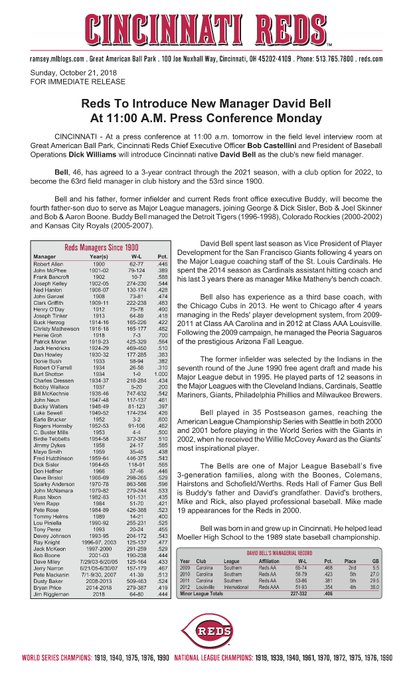 David Bell has been named the new manager of the Cincinnati Reds. He will be introduced at a press conference on Monday at 11:00 a.m.

Twitter Ads info and privacy
Bell comes from a baseball family. In addition to his father, his grandfather, Gus Bell, is a Reds Hall of Famer. His brother, Mike Bell, was also a third baseman. He appeared in 19 games with the Reds during the 2000 season.
With his grandfather and father having played Major League Baseball, the Bell’s are one of five families to send three generations to the majors.
One of the others is the family of former Phillies catcher Bob Boone. Boone’s father, Ray Boone, played in MLB, as did sons Brett Boone and Aaron Boone. Both Brett and Aaron had multi-year stints with the Reds.
Bell spent last season with the Giants as their Vice-President of Player Development. That type of role may become a trend in the grooming of managers. Gabe Kapler served as the Los Angeles Dodgers Director of Player Development prior to landing his current job as the Phillies manager.
The Reds finished the 2018 season in fifth (last) place in the National League Central Division with a 67-95 record. It was the team’s fourth straight last place finish. Cincinnati last reached the postseason as an NL Wildcard team in 2013. They last won an NL Central crown in 2012.
The Reds have not been to the World Series since sweeping the Oakland A’s 4-0 in 1990. That was the fifth victory in the Fall Classic in the history of the franchise, which began play in the old American Association as the Cincinnati Red Stockings in 1882. They joined the National League as the Reds for the 1890 season.