Phillies Should Stand Pat in the Outfield in 2016 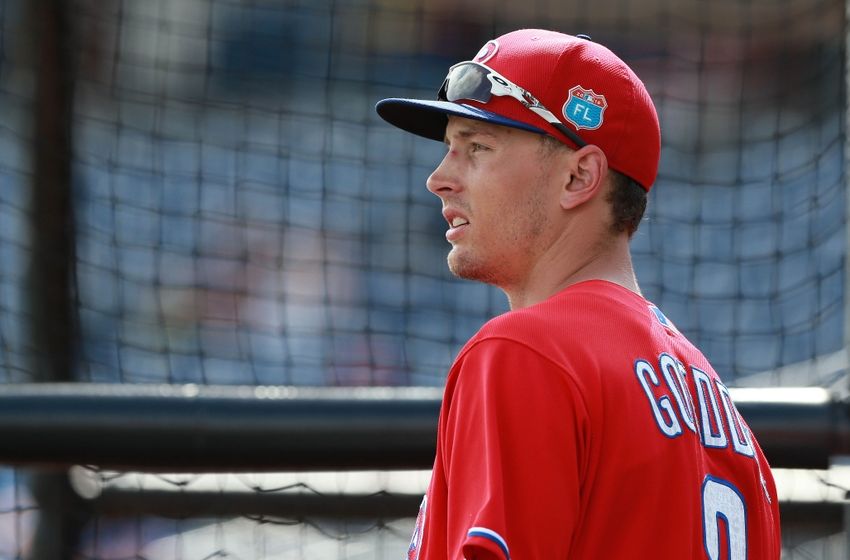 The projected right fielder, Aaron Altherr, went down with a left wrist injury suffered last week.
He will miss anywhere from four to six months, which means that he will be out for most, if not all, of the coming 2016 season.
There has been speculation from a number of sources, most notably MLB insider Jayson Stark, that the Phillies are keeping their eyes open for possible corner outfield additions.

@jaysonst
Another thing we mentioned on the podcast: Phillies looking for a veteran OF with Altherr out. Willing to take on $.https://twitter.com/Josh_Macri/status/709755413303058432 …
While the addition of some “veteran OF” would not necessarily be a bad idea, it is my opinion that the addition of any outfielder at this point is not necessary, and might in fact prove detrimental under the current Phillies circumstances.
Whether you agree with or like the term “tanking” in regards to the Phillies 2016 season plans, the fact remains that this is at best a 2nd division team, and at worst once again one of the worst teams in baseball.
What the Phillies need more than anything else right now is to fully evaluate as much of their in-house talent as possible.
Decisions have to begin to be made regarding the ability of these players in order to determine which look like they can be pieces to the longer term rebuilding project.
The only way that young players are going to improve is by actually playing in games, getting plate appearances, tossing innings on the mound.
The Phillies, despite Altherr’s injury, have such players at or near the Major League level, and taking away their plate appearances by giving them to some veteran would be anthithesis to their plans.
The immediate beneficiary of the Altherr loss should be Rule 5 draftee Tyler Goeddel. The club had to carry the talented 23-year old on the big league roster all season, or return him to the Tampa Bay Rays, or work out some deal with Tampa that would allow them to demote him to AAA for further development.
Goeddel was Tampa’s choice at 41st overall in the Supplemental 1st round of the 2011 MLB Amateur Draft out of a California high school.
He worked his way incrementally through the Rays’ minor league system, reaching AA last summer for 533 plate appearances.
Known for his speed and defense, Goeddel had a career .262/.337/.403 slash line across 1,888 minor league plate appearances. He has scored 224 runs, registered 79 doubles and 32 triples, and stolen 108 bases.
While Goeddel could certainly benefit from a season at AAA, the fact is that the Phillies loved his talent enough to make him the first overall selection in the December Rule 5 draft. The Altherr injury is now an opportunity to give Goeddel regular playing time.
Another reason not to sign a veteran free agent, or at least not bring in anyone with any expectation that they will receive any kind of substantive playing time, is the status of the team’s top outfield prospects.
Both Nick Williams and Roman Quinn showed well during their stints in the Grapefruit League over the last three weeks.
The powerful Williams and the speedy Quinn are likely the Phillies future. Each is similar to Goeddel in that they could use a few hundred AAA at-bats, possibly most of another season in the minors.
However, both players appear to be very close to MLB-ready, and could accelerate their time tables with impressive performances with the AAA Lehigh Valley IronPigs.
Any opening in the Phillies outfield later in the summer due to injury should be theirs, were that to prove the case.
In the meantime, players such as David Lough and Cedric Hunter have already spent time with the Phillies this spring, and have done nothing to deserve being shoved further back on the depth charts by some placeholder outsider.
Lough and Hunter can hold the places for Williams and Quinn on the cheap, with no appreciable change to the Phillies place in the standings.
Take a look at some of the names that have actually been publicly floated as possible Phillies targets: Alejandro De Aza, Carlos Beltran, Jon Jay, Coco Crisp, Nick Swisher,Michael Bourn.
Does any of that really excite you? Honestly? We’re talking about players either well past their primes, or of modest all-around talent.
There is absolutely nothing available to the Phillies in free agency or via trade that would make any real, appreciable difference.
The Phillies are not expected by anyone, fans included, to have a winning season this year. Taking plate appearances away from Goeddel, or blocking Williams and/or Quinn, with some placeholder with a familiar name would be just plain dumb.