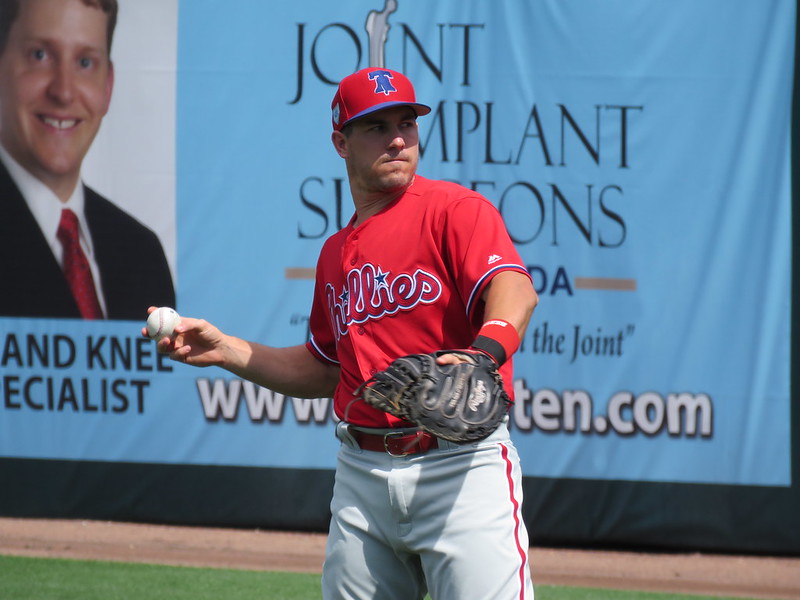 Baseball is back – Now what about Realmuto?

As the sport prepares to have players report for the re-start of training camps, Phillies fans are excited to have baseball back. Hard dates are on the calendar, and star players like Bryce Harper and Andrew McCutchen are ready to make their first appearances of the year at our beloved Citizens Bank Park. Soon, the sounds of bats cracking and fastballs hitting leather gloves will fill the park. Despite empty seats, our game will be back in full swing.

Of course, that’s the tip of the iceberg, and one of the tangible things that we know. There are a lot of variables on the table yet to settle and come to the surface. Details on appearances of mascots such as the Phillie Phanatic. We know that Dan Baker will be introducing the players, but will there still be walk-up music piped over the P.A. system? How will the health and safety protocols affect the pace and style of play?

And of course, what will the Phillies do with J.T. Realmuto?

The Realmuto story left off back in March when Major League Baseball froze all transactions including negotiations. Before the COVID-19 pandemic it seemed as though both sides were eager to reach a deal before Opening Day.

Coming off a loss to the club in his arbitration hearing, Realmuto seemed disappointed, but also understood this was not the Phillies fault. At least in public statements, he held nothing against the organization, despite slightly playing the media and teasing the fans with talks about exploring free agency in the fall.

Make no mistake, Realmuto wants to be in Philly. With a cornerstone guy like Harper in your corner and with Joe Girardi now managing at the helm, the Phillies haven’t had a better chance at winning the World Series in over a decade. Realmuto is a very important piece of the Phillies championship puzzle in 2020 and beyond. Besides Harper, arguably the most important piece. That alone makes this mutually beneficial. At 29 years of age and playing the most physically demanding position in baseball, Realmuto has maybe four or five prime years left. This is likely his last chance at a big contract.

In order to acquire Realmuto, the Phillies gave up a number of assets, most important among them top pitching prospect Sixto Sanchez. Seeing as how inconsistent pitching has been a major issue in Philadelphia in recent years, you’d think the Phillies would be foolish to trade Sanchez away for two years (now one full and one shortened) of Realmuto. You would be right, except…

Nobody expected the COVID crisis. Nobody expected baseball to be out on hiatus, or that the league and players would struggle to agree if and when to start. The baseball environment is rocky right now, and the upcoming CBA negotiations make it even more uncomfortable, particularly considering how ugly it was this past spring and summer.

When the Phillies made the trade for Realmuto, contract negotiations were expected to close before the start of the 2020 season. Then it made sense to lock him in and pay him what he was worth. It looked like the Phillies could contend to win the division for the next few years.

But what now? We are facing a shortened season, with question marks looming everywhere you look. It appears like both this 2020 season and next year will have some form of adjustments and tweaks to MLB in order to continue operating the game. Baseball as we know it is changing. The game won’t return to a level of “normalcy” for a few years – if ever. Realmuto is a tremendous athlete. But as he ages out of his next contract it will become likely that he moves to a full-time DH/1B role. Talk to Joe Mauer about that.

So what makes the most sense for the Phillies? A three-five year, $23 million per year contract is most likely. Realmuto and Harper get to put together a solid run at that World Series, assuming the pitching comes together. The other pieces are already in place. This team has the talent to compete at a high level, even in a challenging division such as the NL East. If you are Matt Klentak, this is what you present to Realmuto. If he declines, thank him for his services and move on, because the clock is ticking.

What makes the most sense for the player? Well, if he wants his best chance at a championship, Realmuto takes that offer. It also closes doors of uncertainty for him. I can’t imagine testing the free agent market right now as a good idea. Nobody knows what baseball’s financial landscape looks like going forward.

On the Phillies side, signing him for too much for too long suddenly becomes more about a bad business move than a bad baseball move. This could turn out to be both of those things. Realmuto wants to set a benchmark for the catching position: long-term, high dollars. Hopefully he is realistic in his expectations. A deal lasting seven or eight years is likely off the table at this point. Anyone willing to give him that isn’t going to find it difficult to win a championship down the road.

The reality is, money doesn’t exist right now. Without clubs being able to sell tickets or concessions, it might not be for a couple of years. Add in the fact that fans were left watching the league and players duke it out over negotiations this year, many of us are expecting it again next year when the CBA expires.

Lastly, my father still to this day talks about how upset he was by the work stoppage and season cancellation of 1994. I think this is the wrong place and the wrong time for a player of his caliber to be tough negotiations. There are too many variables for both sides to consider. There are many big factors in determining what happens with Realmuto going forward.