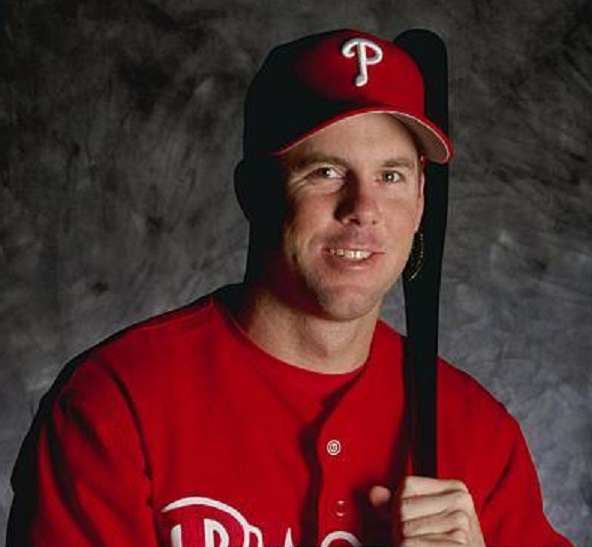 The position player representative for the 1998 Philadelphia Phillies team in this ‘Phillies 50’ series of random players appeared in two seasons with the club and enjoyed a little more than the cup of coffee tasted by many others.

Selected in the 12th round of the 1992 MLB Amateur Draft out of the University of Cal-Berkeley, Jon Zuber was a southern California native. Mostly a first baseman who also had some corner outfield experience, Zuber was a left-handed hitter and fielder known more as a high-average guy rather than a power source.

That profile would play out as his minor league career developed over the next five years. Rising to Triple-A Scranton-Wilkes Barre by 1995, Zuber began the 1996 season back there with the Red Barons. Thanks to an early season injury to starting first baseman Gregg Jefferies, Zuber was called up at age 26 to provide depth behind usual backup Kevin Jordan.

Over five games that month he was given one start by manager Jim Fregosi. His first plate appearance came on April 19, 1996 as a pinch-hitter for pitcher Rich Hunter in the bottom of the 7th inning of a scoreless game at Veterans Stadium between the Phillies and visiting Saint Louis Cardinals. Zuber struck out against reliever T.J. Mathews. During the five appearances he would go hitless and was returned to Triple-A in late April.

Zuber was called back to Philly in late August and remained with the club for the rest of that season. On August 30, 1996 at The Vet he registered the first hit of his big-league career when he led off the bottom of the 4th inning with a base hit off Los Angeles Dodgers starter Tom Candiotti. He rolled around to third on a double by Jefferies and then scored his first run in Major League Baseball on a sacrifice fly from Benito Santiago.

In all, Zuber appeared in 30 games and received 99 plate appearances. After Pete Incaviglia was dealt to Baltimore in late August, Jefferies was moved to left field and Zuber named the starter for the rest of the season with a Phillies team that lost 95 games and finished in last place.

Zuber spent all of 1997 back at Triple-A and enjoyed an outstanding season, slashing .315/.421/.451 with 45 extra-base hits and a career-high 85 RBIs. But it wasn’t enough for even a September roster expansion promotion.

He would get one more shot in the big-leagues when Zuber was promoted in late June of 1998. He would spend the rest of the season with a team managed by Terry Francona, serving mostly as a left-handed bat off the bench. During that 1998 campaign he produced a .244 batting average and a half-dozen RBIs over 52 plate appearances across 38 games.

After spending all of 1999 back at Triple-A with Scranton-Wilkes Barre, Zuber signed with the New York Yankees as a free agent. He would play the 2000 season with their Triple-A Columbus club. Then in 2001, Zuber chose to go overseas and played with Yokohama in the Japan Central League.

Returning to the states for 2002, Zuber took one final shot by signing with the Milwaukee Brewers. The starter at Triple-A Indianapolis in the Brewers farm system that year, once again Zuber failed to get a promotion back to Major League Baseball.

Zuber would go on to become the hitting coach at Cal-Berkeley. His former pupil, current Oakland A’s starting shortstop Mark Canha, has credited Zuber with much of his current success: “That sophomore season was the one year I had to make it happen,” Canha said in a phone interview with Alex Coffey at The Athletic. “If it wasn’t for him, I don’t know if my career would’ve taken off.”