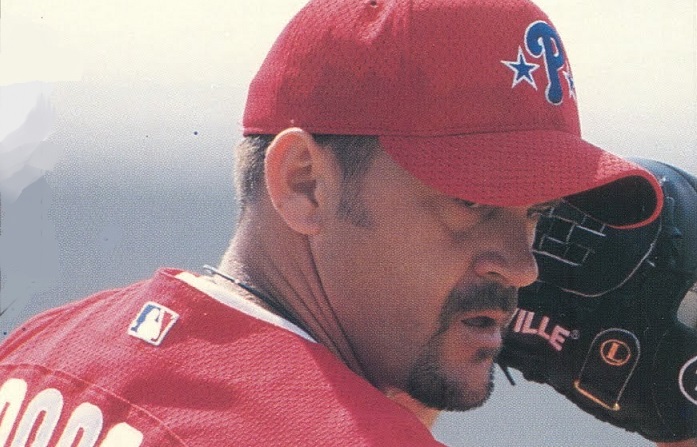 The 2001 Philadelphia Phillies were the first version of the ball club to finish with a winning record since the 1993 National League pennant winners. Under new manager Larry Bowa the team won 86 games and finished just two shy of the perennial division power Atlanta Braves in the NL East race.

One of the factors which helped that Phillies club to contend was a veteran bullpen mix that mostly stayed healthy for the entire season. Bowa used it liberally, going to 10 different relievers for more than 20 appearances each.

Perhaps one of the least likely to make the club and contribute that year was a 29-year-old Cuban defector and career minor league left-hander named Eddie Oropesa. He becomes our ‘Phillies 50’ pitching representative from that ball club.

Oropesa defected from the Cuban team that was competing at the World University Games in Buffalo, New York in 1993. He was made eligible for the MLB Amateur Draft the following year and was selected in the 14th round by the Los Angeles Dodgers.

“I remember when I grow up, I see my mother and my father start struggling back in Cuba to give me food, to give me everything, my two sisters and me. I didn’t want my son going through that…” said Oropesa in a 2018 interview with Andrew Houghton for ESPN Missoula. “That’s why I make the decision to come to America. For me, that’s the whole point of my life.”

Just over two years later, Oropesa was selected by the San Francisco Giants in the December 2005 MLB Rule 5 Draft. Used mostly as a starting pitcher, the southpaw rose to the Triple-A level by the 1999 season.

Granted free agency, Oropesa signed with the Phillies in November 2000. The following spring he made the big-league roster out of spring training thanks to the combination of a solid performance in the Grapefruit League and the club’s dearth of lefty relievers. Veteran Rheal Cormier was the Phillies only other healthy southpaw relief option at that point.

“It was difficult, especially the last week, because everybody asks, ‘Hey, you making the team, you make the team?’” Oropesa told Houghton. “So, probably I didn’t sleep for two, three days. Finally they call me to the office, they give me the news. I started crying, yeah.”

He didn’t have to wait long for his debut in Major League Baseball. Bowa sent him in on Opening Day, April 2, 2001 at Pro Player Stadium in Miami against the host Florida Marlins in a pivotal spot. With the Phillies leading 5-4 in the bottom of the 7th inning, the Fish moved the tying run to third base with one out. Bowa then waved in Oropesa to face veteran lefty power-hitter Cliff Floyd.

Oropesa got ahead with a strike and then won the battle, inducing Floyd to pop out to third base for the second out. Oropesa was then replaced by Wayne Gomes who retired the final batter of the frame to keep the Phillies ahead in a game they would ultimately win by a 6-5 score in 13 innings.

He would remain with the team for more than two months, mixing shutdown performances with the occasional blowup. While 15 of his 20 appearances were scoreless, Oropesa allowed multiple runs in three different games. This largely restricted Bowa’s use of him to situational only, facing a left-handed hitter at a critical point and then leaving the game.

When veteran lefty Ed Vosberg was set to return from injury in mid-June, Oropesa was sent down to the minor leagues. He would return in August to make eight appearances that month, and then took two final late-September turns on the mound. In those 10 games he only tossed 4.1 official innings, but they were all blanks as he allowed just three hits.

That would be Oropesa’s lone season pitching for the Phillies. He was granted free agency once again after the 2001 season ended and signed with the defending World Series champion Arizona Diamondbacks. The Dbacks used him for 79 games over the 2002-03 campaigns.

In 2004, Oropesa made his final 19 big-league appearances for the San Diego Padres. The following summer he appeared at the Triple-A level in both the Chicago Cubs and Baltimore Orioles organizations.

Oropesa’s playing career had a unique ending. After playing independent ball in 2005 he went overseas and pitched in the Dutch Major League in 2007. “I wanted to keep playing baseball, and the truth is, the only thing I know is to play baseball. It’s difficult, you know,” Oropesa said per Houghton.

In retirement, Oropesa started to work with kids in the Miami area where he resides today, helping them develop their own talents. The Los Angeles Dodgers hired him in 2012 to help Cuban native Yasiel Puig transition to the U.S., and Oropesa has kept his hand in the game by helping other young Latin American players make the transition.