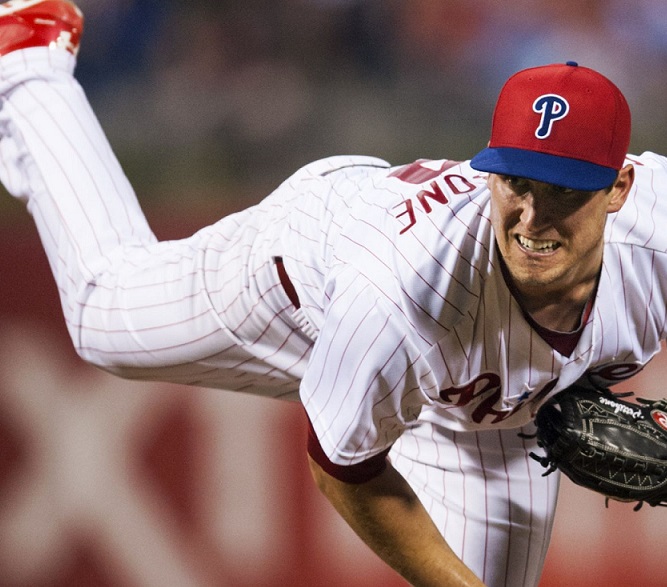 As we continue our trip backwards through time in Philadelphia Phillies history from 1971-2019 we move to the pitcher who was not previously covered in the series and who features that combination of having little impact on the 2014 Phillies ball club and who is unlikely to have an impactful big-league career.

The Phillies gave Jonathan Pettibone 20 big-league starts over the 2013-14 seasons combined. But just two of those came in 2014, and those would prove to be his last appearances in Major League Baseball.

Pettibone was the Phillies third round pick in the 2008 MLB Amateur Draft out of Esperanza High School in Anaheim, California. The right-hander (he hit lefty) had also been born and raised in Orange County.

Slated to attend the University of Southern California, the Phillies instead enticed him into accepting a pro contract and skipping college with a half-million dollar signing bonus and phone calls from young pitchers Cole Hamels and Kyle Kendrick.

After pitching one game in the Gulf Coast League after signing, Pettibone spent the next handful of years rising incrementally through the Phillies minor league system. In 2011 with High-A Clearwater, Pettibone was a Florida State League all-star.

A successful 2012 campaign split between Double-A Reading and Triple-A Lehigh Valley left him on the doorstep of a big-league promotion, and that opportunity finally came early in the 2013 season.

On April 22, 2013, manager Charlie Manuel sent Pettibone out for a start against the Pittsburgh Pirates at Citizens Bank Park. He got to take the field that night with former World Series heroes Ryan Howard, Chase Utley, and Jimmy Rollins playing in the infield behind him.

Pettibone went 5 1/3 innings in front of more than 35,000 fans that night, allowing six hits and two earned runs while striking out six and walking no one. He didn’t earn a decision, but kept the Phillies in a game they would go on to win by 3-2.

He would remain with the Phillies through the end of July, making 18 starts that season, eight of those as Quality Starts. He allowed 109 hits over 100.1 innings with 66 strikeouts, registering a 4.04 ERA and 1.465 WHIP.

It wasn’t a bad overall performance for a pitcher who turned just 23-years-old in the middle of July that year. Unfortunately, an inflamed rotator cuff caused the team to shut him down early at that point, with Pettibone making his final 2013 start on July 28 at Detroit.

When the 2014 season began, Pettibone continued to experience shoulder troubles. An MRI revealed no structural damage, but his ongoing discomfort caused the Phillies to start him out in the minor leagues.

With Hamels experiencing injury troubles, Pettibone was promoted to make a pair of April starts with the big club. He surrendered just two runs, only one earned, to the Miami Marlins on April 12 in his first start.

Pettibone’s second start on April 18, 2014 at Coors Field against the host Colorado Rockies would prove to be not only his last of the season, but the last he would ever make in Major League Baseball.

The hosts treated the young pitcher rudely that night, ripping him for eight earned runs on nine hits over just four innings. Seven of those runs came in the first two frames, including a two-out, three-run homer off the bat of Troy Tulowitzki in the 2nd inning. That put the Phillies into a hole they would never climb out of in what turned out to be a 12-1 defeat.

Sent back to Triple-A, Pettibone would continue to be bothered by the shoulder woes and was finally diagnosed with a SLAP labrum tear. He opted initially against surgery, but finally underwent the procedure performed by Dr. James Andrews on June 18, 2014. He would miss the remainder of that season and all of 2015 as he recovered and performed and tried to rehab.

Granted free agency in November 2015, Pettibone signed on with the Chicago Cubs in January of 2016 and received an invitation to their spring training camp. He never pitched with the Cubs, and was released in mid-April.

The New Britain Bees in Independent ball gave Pettibone a chance in 2017-18. Over those two seasons he went just 2-9 with a 5.52 cumulative ERA, allowing 147 hits over 109.1 innings across 20 starts. The Bees released him in May 2018 at age 27 and he has not pitched professionally since.

A once well-considered prospect with the talent to pitch at least at the back-end of a big-league rotation for years, Pettibone became one of many to lose their careers to injury before they ever really had a chance to get off the ground.