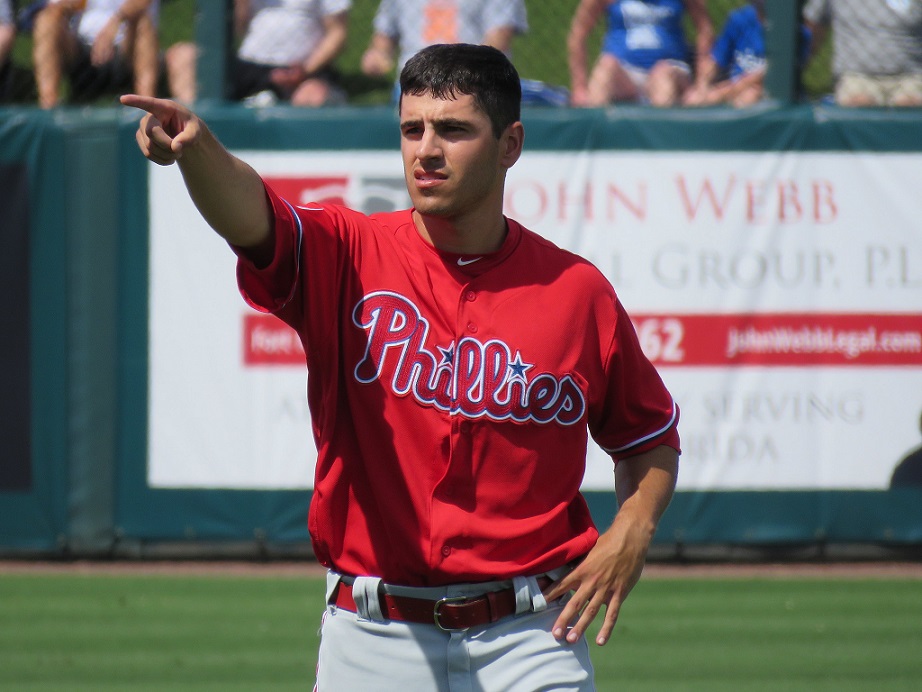 Phillies have something real in Adam Haseley

Haseley has enjoyed a fine rookie season with the Phillies

For the Philadelphia Phillies, an injury-marred season is now winding down to a disappointing finish. It appears more likely with each passing day that there will be no postseason baseball at Citizens Bank Park.

For an eighth straight year there will be no cool October nights filled with playoff drama for fans to enjoy as the calendar and the weather turns to fall.

However, there will always be some positive developments to be taken away from even the most disheartening campaigns. For fans of the Phillies, the play of rookie outfielder Adam Haseley should be one such positive.

Had it not been for the devastating torn left ACL to Andrew McCutchen‘s left knee that prematurely ended the veteran outfielder’s season at the start of June, we probably would not be talking about Haseley in this manner.

In the immediate aftermath of the McCutchen injury, the Phillies promoted Haseley for the first time to help provide some outfield depth in the short term. It was only an emergency measure, and Haseley would play in just two games before being returned to the minor leagues.

The club had traded for veteran Jay Bruce to bolster their bench. Now, Bruce was going to be forced into an everyday role. Unfortunately, after more than a month of solid play, Bruce was also lost to injury.

That production, combined with his display of maturity as a person, resulted in the Phillies bringing Haseley back to the majors. Within days of his return, Bruce suffered a strained right oblique. Returning three weeks later, an arm injury would immediately put Bruce back on the Injured List until early September.

It has been the combination of injuries to McCutchen and Bruce that has opened the door for Haseley to receive far more playing time in Major League Baseball than the Phillies could even have imagined when the season opened.

The youngster struggled for awhile to find his footing while adjusting to pitching talent at the highest level of professional baseball. On August 25, he was hitting just .233 over his first 129 plate appearances.

It was two days later that things began to turn for Haseley. A two-hit night at home against the Pittsburgh Pirates started a streak of three straight multi-hit games, and it all began to click.

In addition to a more consistent level of offensive production, Haseley has begun to put together an impressive highlight reel of fantastic defensive plays.

Haseley has mostly appeared in center field, making 25 starts there with another four appearances in the middle of the Phillies outfield. However, manager Gabe Kapler has not hesitated to use him on the corners either. Haseley has appeared in 18 games out in left field (14 starts) and nine games in right field, including seven starts.

Even with the emergence of veteran Corey Dickerson as an impact player following his acquisition at the July 31 trade deadline and the return of Bruce, Haseley has remained an almost daily fixture in the Phillies lineup.

This is exactly the level of play that a team expects from their top draft picks. Haseley, an Orlando, Florida native, was the Phillies selection at eighth overall in the first round of the 2017 MLB Draft out of the University of Virginia.

One area in which Kapler has been somewhat babying the lefty-hitting Haseley has been in facing southpaw pitching. Scott Lauber at The Philadelphia Inquirer recently quoted the Phillies manager on his thinking in limiting his rookie outfielder’s exposure to left-handers:

“He has historically hit left-handed pitching, but we are trying to kind of ease him into this role with some sensitivity and try to set up Hase for success. One of the ways to do that is to try to look for the matchups that might be especially difficult and give him a break in those matchups.”

For the first time in The Show, @adamhaseley7 goes deep! #RingTheBell pic.twitter.com/qpEvI6RjYX

In looking forward to next season and beyond the question will be, how do the Phillies envision Haseley’s role? Bryce Harper will be manning right field for the foreseeable future. McCutchen will be ready to return in spring training and is signed for at least two more years through the 2021 season. Bruce is signed through next season and should also be back.

Have the Phillies seen enough to hand Haseley the everyday starting center field role for the 2020 season? Will they try to re-sign Dickerson and use Haseley as a backup across all three outfield positions for the next couple of years?

Whatever their ultimate long-term plans, the Phillies seem to have found something in Haseley. Whether he can become a star, even an everyday player for a truly contending team, remains debatable. But he has demonstrated the talent to be counted on as a valuable contributor for years to come.