On a night when the Phillies honored turn-of-the-century All-Star outfielder Bobby Abreu with a place on the franchise Wall of Fame, the present-day Philadelphia Phillies (58-52) held on for a 3-2 victory over the Chicago White Sox (47-61) at Citizens Bank Park.

The night was all about pitching at the start. Both Phillies ace Aaron Nola and White Sox starter Ross Detwiler went through their opposing lineups perfectly through the first three innings.
The visitors broke through first with a run in the top of the 4th inning. Leury Garcia led off with a walk, moved to second on a ground out, and scored on a two-out double off the bat of Jon Jay. 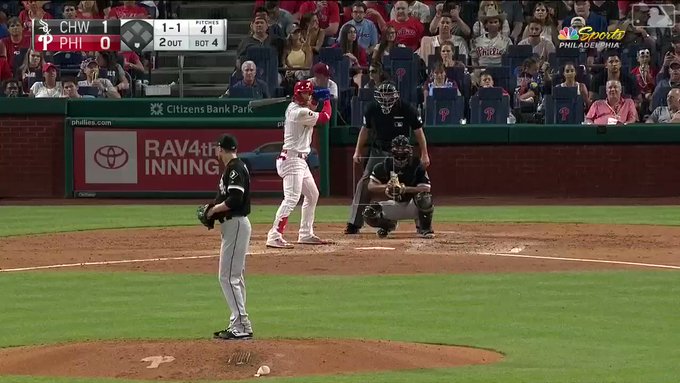 44 people are talking about this
With two outs in the bottom of that same inning the Phillies finally got on the scoreboard in a big way. Bryce Harper crushed a 1-1, 89 mph, four-seam fastball from Detwiler into the right field upper deck. His 100th hit with the Phillies tied the game at 1-1. Rhys Hoskins followed by jumping on a first-pitch sinker, blasting it out to dead-center field to give the Phillies a 2-1 lead.

Phillies Nation@PhilliesNation
Hoskins & Harper go back-to-back in the bottom of the 4th inning to put the Phillies on top. 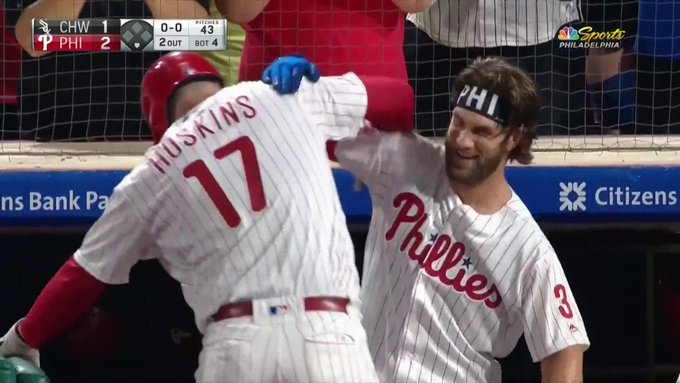 35 people are talking about this
The score stood into the 7th inning when Chicago produced a major threat. With one out, Eloy Jimenez singled and Tim Anderson doubled. Yolmer Sanchez then bounced one to Hoskins, who shuffled the ball home to Andrew Knapp in time to get Jimenez at the plate. Nola then struck out Friday night hero Matt Skole as a pinch-hitter to end the threat and keep the Phillies on top by the 2-1 score.
In the bottom of the 7th, the Phillies took their turn presenting a big threat. A walk to Adam Haseley, single by Maikel Franco, and intentional walk to Andrew Knapp loaded the bases. Phillies skipper Gabe Kapler opted to pinch-hit for Nola, who was up to 94 pitches, with J.T. Realmuto.
The Phillies regular catcher flew out to center field for the first out. But then Cesar Hernandez hit into a 4-6 force, with Haseley rushing home with a run to push the Phillies lead out to 3-1. Jean Segura was hit by a pitch by new Chisox hurler Dylan Covey, loading the bases for Harper. But the right fielder grounded out, minimizing the damage.
Nick Pivetta came on for the Phillies in the top of the 8th and did the job in that inning, setting Chicago down in order. Kapler opted to bring him back out for the 9th inning with the score still 3-1, and things did not go as smoothly.
The inning began with Jose Abreu reaching on a throwing error by Segura. Jay followed with base hit, putting the tying run on base. Chicago skipper Rick Renteria then put Ryan Cordell in as a pinch-runner for Jay.
Pivetta then bore down and struck out Jimenez and Anderson, moving the Phillies within an out of a victory. But nothing is ever that easy for this 2019 Phillies ball club.
Yolmer Sanchez singled to score Abreu, making it 3-2, with Cordell rolling around to third base where he stood as the tying run just 90 feet away. Rather than blowing it as so often has happened in this hair-raising season, Pivetta then came through, striking out pinch-hitter Adam Engel swinging to end it and giving Nola his 10th win of the season.
The Phillies and White Sox will go at it one more time in the rubber match on Sunday afternoon at Citizens Bank Park. Drew Smyly will make his third start since joining the Phillies, with right-hander Reynaldo Lopez taking the mound for Chicago.

The back-to-back home runs from Harper and Hoskins provided the winning margin. But it was Nola’s outstanding pitching that was once again the real difference in this one for the Phillies.
Nola went seven strong innings, striking out 10 batters and allowing just three hits while walking two. Coming off a bit of a rough outing in two of his last three times on the mound, this was a good shot-in-the-arm for the Phillies ace right-hander.