In a deal first reported by ESPN MLB insider Jeff Passan, the Philadelphia Phillies have acquired outfielder Corey Dickerson in a trade with the Pittsburgh Pirates. In exchange, the Phillies will be sending international slot money to Pittsburgh.

Dickerson is a 30-year-old left-handed hitter (fields right-handed) who was the eighth round choice of the Colorado Rockies in the 2010 MLB Draft out of Meridian Community College in his native Mississippi.
He debuted with the Rockies in the 2013 season, becoming their starting left fielder the following season. In January 2016, Dickerson was dealt to the Tampa Bay Rays along with a prospect for pitcher German Marquez and Jake McGee.
With the Rays, Dickerson became the starting left fielder and a 2017 American League All-Star, blasting 51 home runs over the 2016-17 campaigns.
In February 2018, Dickerson was dealt to the Pirates for Daniel Hudson and a prospect. Last season in Pittsburgh, Dickerson won the National League Gold Glove Award for left fielders.

#Phillies have acquired outfielder Corey Dickerson from the Pittsburgh Pirates in exchange for international signing bonus money and a player to be named later. 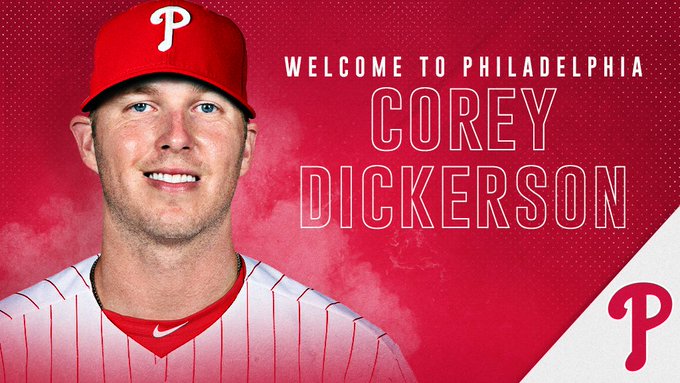 538 people are talking about this
This year, Dickerson injured his should in the first week and ending up spending more than two months on the Injured List. He returned and had put together a .317/.376/.556 slash line with four home runs, 18 doubles, 25 RBIs, and 20 runs scored over 141 plate appearances.
He left the Pirates series opener with the New York Mets this past Friday with a groin injury. But returning to the lineup on Tuesday night in Cincinnati, Dickerson blasted two home runs and drove in five during the Pirates brawl-filled victory over the Reds.
It has also been reported that the Phillies may send a player to be named later to Pittsburgh to complete the deal at a later date. In order to make room on the 40-man roster for Dickerson, the Phillies have DFA’d outfielder Dylan Cozens, who was out for the season after foot surgery back in May. Cozens will not likely be back with the Phillies next year.
Assuming he is fully healthy, Dickerson could start nearly every day for the Phillies in left field for the rest of this season. A free agent when the season ends, he is likely a two-month rental as the club tries to bolster their overall depth for a postseason run.
Originally published at Phillies Nation as “Outfielder Corey Dickerson acquired by Phillies from Pirates“