The Philadelphia Phillies left tons of base runners in scoring position, 10 left on base total, on a steaming hot Tuesday night at Citizens Bank Park, but still came away with a 4-2 victory over the San Francisco Giants.

With the win, the Phillies (56-50) moved three games up on the Giants (54-53) in the overall National League Wildcard race standings. Based on the results of other games involving that race, the Phillies will end the night tied for one of the two available Wildcard postseason berths.
The two teams battled through the first three innings scoreless, with the Phillies leaving a runner out at second base in each frame. But it would be the home side getting on the board first, finally pushing two runs across in the bottom of the 4th inning.
J.T. Realmuto and Cesar Hernandez started that inning with singles, with Realmuto rolling around to third base on the Hernandez base hit. Maikel Franco then hit into a 4-3 ground out, but Realmuto raced home with the game’s first run. Adam Haseley then ripped a double to right, with Hernandez racing around to make it a 2-0 game.
In the bottom of the 5th inning, the Phillies powered up with the longball to double their lead. After Bryce Harper drew a one-out walk, Rhys Hoskins crushed his 23rd home run of the season out to center field, pushing the Phillies out on top by a 4-0 margin.

Phillies Nation@PhilliesNation
Rhys Hoskins with a two-run blast puts the Phillies out in front by 4-0. 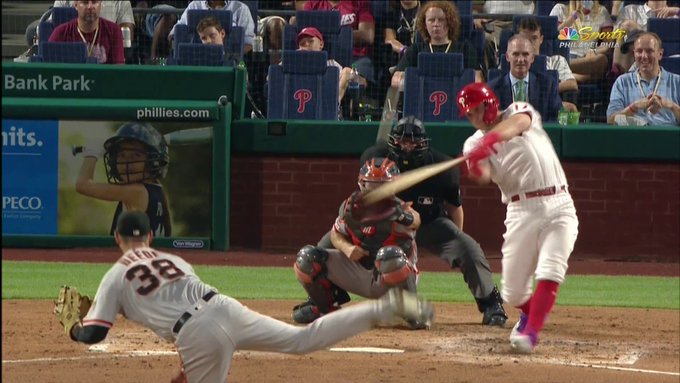 21 people are talking about this
The real story on this night for the home side was the pitching of newcomer Drew Smyly. The southpaw was brilliant, allowing just four hits and a walk over seven shutout frames, striking out five Giants batters.
In the 8th, manager Gabe Kapler went to Nick Pivetta out of the bullpen. Pivetta promptly surrendered a pair of solo home runs, to Brandon Belt with one out and Stephen Vogt with two outs, cutting the Phillies lead in half.
Hector Neris then came on for the 9th inning, and the closer set the Giants down in order to clinch the victory. The Phillies and Giants will try to go at it again on Wednesday evening in South Philly with showers and thunderstorms looming in the weather forecast. 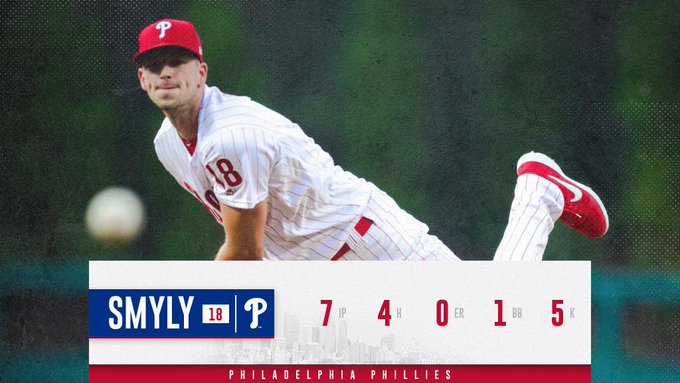 279 people are talking about this

For the second straight start since being signed as a free agent, the southpaw gave the Phillies a strong outing. He used key strikeouts, a pair of big double play balls, and a nice caught stealing to keep the Giants off the scoreboard.
Over 13 innings with the Phillies, Smyly has now allowed just one run on eight hits, walked three, and struck out 13 opposing batters. Who knows how it will go over the longer haul, even just down the stretch this season. But right now, Smyly is giving the beleaguered Phillies starting rotation an incredible shot in the arm at just the right time.