The first-place Atlanta Braves (60-43) arrive at Citizens Bank Park for a three-game weekend series with the Philadelphia Phillies (54-48) following a Thursday off-day in the schedule for both clubs.

The Braves are struggling a bit, having dropped six of their last eight games. Meanwhile, the Phillies have come out on top in seven of their last 10 games. They have won five of six games for just the third time all season.
Despite those recent results, Atlanta still maintains control in the NL East Division standings. They are 4.5 games ahead of the second place Washington Nationals, and 5.5 ahead (five in the loss column) of the third place Phillies.
The Phillies will enter this series just one game off the pace in the race for the final NL Wildcard playoff spot. In the Friday night opener, the Phillies will be looking for a fourth straight victory for what would be the fifth time this season. They have not yet won five in a row during all of 2019. They will also be trying to win six of seven for the first time all year.
These two division rivals have already met nine times this year with the Phillies capturing five of those games. When last they met at the start of the month, the Braves took two of three in Atlanta. The hosts scored 21 runs in a pair of blowouts by 9-2 and 12-6 scores in the final two games after an Aaron Nola shutout had given the Phillies a win in that series opener.
Averaging 5.22 runs per game, the Braves are the third-most productive offense in the National League. Their collective OPS of .790 is ranked sixth in all of Major League Baseball. But during this recent eight-game struggle, Atlanta’s offense has averaged only 3.375 runs per game.
The Braves are coming off a 2-0 shutout at the hands of the Kansas City Royals on Wednesday. It was just the third time that Atlanta has been white-washed all year. The last time, after putting up a goose egg against Nola and the Phillies, their hitters broke out with 21 runs over the following two games. Let’s hope that doesn’t happen again this time.

Brian McCann (35/C): The now 35-year-old catcher was born in Athens, just about 60 miles from Atlanta. The lefty hitter was the Braves second round choice way back in the 2002 MLB Draft out of a Georgia high school and reached the big-leagues in 2005. By the next season he was beginning a stretch of six straight and seven of eight NL All-Star seasons, establishing himself as the top offensive catcher in the game.
In December 2013, McCann signed a five-year, $85 million contract as a free agent with the New York Yankees. With the Yanks, McCann won a 2015 AL Silver Slugger. Then in November 2016 he was dealt to the Houston Astros. Splitting time with Evan Gattis behind the plate in Houston, McCann helped lead the Astros to the first World Series championship in franchise history in 2017.
A free agent once again this past off-season, McCann opted to return home as a veteran influence for a young, talented Braves ball club. He has split time as the left-handed half of a platoon with the righty hitting Tyler Flowers. Facing mostly right-handed pitching, McCann has thrived with a .274/.336/.458 slash line, 9 home runs and 34 RBIs.
McCann has been a Phillies killer over the course of his career. His 23 home runs against them are the most of the 279 which he has blasted in his career against any opponent, and the 85 RBIs and 30 doubles are second-most. He has 13 career homers and 19 doubles at Citizens Bank Park. 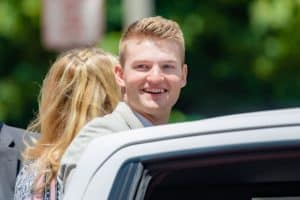 21-year-old right-hander Mike Soroka made the NL All-Star team this year as a rookie. He pitches the series opener on Friday night for Braves. (Erik Drost)
FRIDAY – Mike Soroka (21/RH): 10-2, 2.46 ERA, 3.08 FIP, 1.094 WHIP, 88 hits allowed over 102.1 IP across 17 starts with an 86/24 K:BB. Soroka is a native of Alberta, Canada who was the Braves first round pick at 28th overall in the 2015 MLB Draft out of high school. Still considered a rookie this year after making five starts in 2018, Soroka is one of the leading NL Rookie of the Year contenders. He made his first NL All-Star team earlier this month. The Phillies hit him hard on Independence Day in Atlanta, and yet still were romped as the Braves offense covered.
SATURDAY – Max Fried (25/LH): 10-4, 4.08 ERA, 3.87 FIP, 1.389 WHIP, 113 hits allowed over 103.2 IP across 21 appearances (19 starts) with a 102/31 K:BB. Fried is a SoCal native who was the San Diego Padres first round choice at 7th overall in the 2012 MLB Draft out of high school. He came to Atlanta in a December 2014 trade as part of a package in return for Justin Upton. The southpaw has been on the 10-day IL with a blister on the index finger of his pitching hand, but is expected to be activated for this start. He has already faced the Phillies three times this year, twice in relief during the opening series of the season at Citizens Bank Park, and again in a start on June 14 in Atlanta. The Phillies ripped him for seven hits (including two homers) and five runs in that outing, driving him from the game after 4.2 innings.
SUNDAY – Kevin Gausman (28/RH): 3-5, 5.71 ERA, 3.85 FIP, 1.428 WHIP, 75 hits allowed over 69.1 IP across 14 starts with a 72/24 K:BB. Gausman is a Colorado native who was the first round choice at fourth overall in the 2012 MLB Draft by the Baltimore Orioles out of LSU. He was dealt to the Braves at last year’s trade deadline along with reliever Darren O’Day in exchange for a four-prospect package. Gausman missed most of June and July while on the IL suffering from plantar fasciitis in his right foot. He returned on July 21 and was sensational in a big start against the Washington Nationals, going seven strong innings, striking out eight while walking none and allowing just one run on five hits in a 7-1 win for Atlanta.

Brian Snitker: We have covered Snitker in detail during previous series opposition previews this year. He is a 63-year-old native of Illinois who attended the University of New Orleans. The Braves are 281-270 in his tenure over parts of four seasons, and he guided the club to the NL East crown a year ago.
Here is his official bio from the Atlanta Braves website: Brian Snitker bio

FRIDAY:  It will be mostly sunny and 85 degrees with nearly the same real-feel conditions at the 7:05 PM first pitch. No chance of precipitation with winds light and temps dropping through the 80’s to the upper-70’s as the game rolls on.
SATURDAY: Mostly sunny and in the upper-80’s at the 7:05 PM first pitch, with real-feels again the same, winds again light, and once again almost no chance of precipitation.
SUNDAY: A sunny afternoon with highs around 90 degrees at the 1:05 PM first pitch. For a third straight game in the series it is expected that there will be no chance of precipitation and light winds, with real-feels the same as the temps.
South Philly weekend weather forecast from The Weather Channel
Originally published at Phillies Nation as “Phillies series opposition preview: Atlanta Braves“