Could Matt Harvey or Derek Holland be next Phillies pitching reclamation projects?

It is not secret that the Philadelphia Phillies are looking to upgrade their starting pitching rotation. As the 2019 MLB trade deadline approaches, the club has been linked to almost every arm rumored to be on the market.
General manager Matt Klentak has not limited his attempts at improving the staff to just the trade market, however. Witness this past weekend’s move to sign left-hander Drew Smyly, who had been released by the Texas Rangers.
Smyly paid off, at least for one start, when the 30-year-old, six-year veteran surrendered just one run on four hits over six innings, striking out eight and walking two in a game that the Phillies ultimately won over the Pittsburgh Pirates.
Two more veterans with a track record of big-league success, one a right-hander and another a left-hander, are now also available after being recently released by their most recent clubs. The righty is 30-year-old Matt Harvey and the lefty is 32-year-old Derek Holland.
Of course, there is a reason that these pitchers, still in the back-end of their prime years, were released. Neither was impressing in this 2019 season.
Harvey was released by the Los Angeles Angels with a 3-5 record and 7.09 ERA amassed across 12 starts in which he allowed 63 hits over 59.2 innings with a 39/29 K:BB. Holland was 2-4 with a 5.90 ERA, allowing 68 hits over 68.2 innings across 31 appearances, seven of those starts, with a 71/35 K:BB.
All the way back in 2013, Harvey became a National League All-Star and finished fourth in the NL Cy Young Award voting as a 24-year-old with the New York Mets. Sadly, he required Tommy John surgery following that season and missed the entirety of the 2014 campaign.
Harvey returned strong in 2015 to win 13 games with a 2.71 ERA over 29 starts. However, he then was forced to undergo thoracic outlet surgery in the middle of the 2016 season, pretty much ending his effective time with New York.
Dealt to the Cincinnati Reds in May 2018, Harvey would go 7-7 with a 4.50 ERA overall in Cincinnati across 24 starts. This past December, Harvey signed a one-year $11 million deal as a free agent with the Angels. 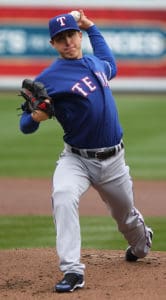 Holland made his mark over eight seasons with the Texas Rangers. (Keith Allison)
Holland was recently released by the San Francisco Giants. After pitching his first eight seasons with the Texas Rangers, with whom he won 16 games as a 24-year-old back in 2011, Holland signed as a free agent with the Chicago White Sox in December 2016, then again as a free agent with the Giants in February 2018.
140 of Harvey’s 145 career appearances have come as a starter. Holland has made 221 career starts across his 275 appearances. Most of his relief outings have come over the last four years.
The question to be asked is, would either or both of these veteran pitchers be a rotation upgrade for the Phillies? Or, would they be inexpensive enough to take a flyer on, hoping to catch lightning in a bottle?
The answer to the first question is likely a no. Their recent performances have been pretty much on a par with what the Phillies were already getting from Nick Pivetta, who was bumped from the rotation with the Smyly signing.
Now, would they be inexpensive? Relatively speaking, yes. Holland would only be owed a fraction of his $7 million and Harvey a percentage of that $11 million contract. Both are only guaranteed through this season. Neither would require surrendering prospects.
For what would basically be about $8 million, the Phillies could add the two veterans to their bullpen mix, while also having some injury insurance for the rotation, as well as a potential spot-starter if one were needed at any point.
Now, would either or both accept a bullpen role? And would the Phillies entertain such moves? Those are unknowns. Neither has been publicly linked to the club at this point. But Klentak, with both the Smyly signing and the recent trade for reliever Mike Morin, has shown a willingness to try inexpensive quick fixes. These two veterans just might fit the bill as well.
Originally published at Phillies Nation as “Could Matt Harvey or Derek Holland upgrade Phillies pitching staff?“