Alec Bohm, Spencer Howard should be untouchable at the 2019 deadline

The 2019 Major League Baseball trade deadline arrives on July 31, now just over a week away. By all accounts, the Philadelphia Phillies intend to be buyers.

With this team still firmly in the National League Wildcard race and within striking distance of the NL East crown, Phillies general manager Matt Klentak is surely working the phones, trying to shore up his roster and fill the club’s needs.
Those needs include more talented bench options, as much help to upgrade the bullpen as Klentak can find, and possibly even an experienced everyday center fielder. Most of all, the GM is trying to plug one, maybe two arms into his starting pitching rotation.
Here at Phillies Nation, we’ve reported on all of the names being attached to the Phillies by the rumor mill. Those include pitchers such as Madison Bumgarner, Zack Greinke, Robbie Ray, Marcus Stroman and Matthew Boyd.
In order to acquire any of these pitchers, the Phillies are going to have to give up something of value. That could include outfielder Nick Williams, second baseman Cesar Hernandez, or third baseman Maikel Franco. It may also mean a pitcher such as Nick Pivetta, Zach Eflin, or Vince Velasquez moving on.

Even more likely is that the Phillies are going to have to dip into their minor league system, surrendering prospects in a deal. Those names could include pitchers Adonis Medina, Enyel De Los Santos, Ranger Suarez, JoJo Romero and Francisco Morales.

Position playing prospects who could be dealt include outfielder Jhailyn Ortiz and shortstop Luis Garcia. You might even see the club willing to move either Adam Haseley or Mickey Moniak in the right deal.

However, there are two prospects, one an arm, one a bat, who are likely considered untouchable over these next nine days. Those prospects would be third baseman Alec Bohm and starting pitcher Spencer Howard.
Bohm was the Phillies first round draft pick a year ago out of Wichita State. Since turning pro, Bohm has done nothing but rake. This season, split between Low-A Lakewood, High-A Clearwater and Double-A Reading, Bohm is slashing .323/.391/.547 with 14 home runs, 42 extra-base hits, 57 RBIs and 53 runs scored over 373 plate appearances in 86 games.

Phillies Nation@PhilliesNation
Alec Bohm’s second home run of the game was this bomb to dead center. 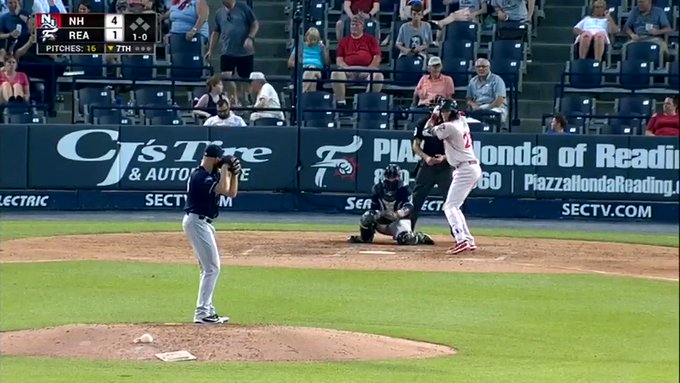 18 people are talking about this
Howard was the Phillies second round draft pick a year earlier out of Cal-Poly University. The 6’3″ right-hander has gone 2-1 with a 1.79 ERA and 0.744 WHIP, allowing just 23 hits over 40.1 innings across nine starts at High-A Clearwater. He has a 56/7 K:BB ratio and has surrendered just two home runs. Howard was briefly on the IL with shoulder soreness, but has been so strong since returning that a promotion to Double-A is coming soon.
Right now, these have to be considered as the Phillies top two prospects. Both are 22 years of age. Each will turn 23 within the next two weeks. There is no reason to think they won’t be serious candidates to appear in red pinstripes with the Phillies by the 2020 season – at the latest.
No one is truly “untouchable”, of course. It all depends on what you receive back. Do you really believe the Phillies wouldn’t trade both of their top prospects, and likely 2-3 more, if they were getting Mike Trout in return? Of course they would.
Of course, that isn’t going to happen either. There is no reasonable deal that you can expect at this deadline that will return enough to the Phillies that they should give up either of these two key pieces to their future. So, at this point, both Bohm and Howard would appear to be untouchable.
Originally published at Phillies Nation as “MLB Trade Deadline: Alec Bohm and Spencer Howard are untouchables“