The Philadelphia Phillies have sat pretty much right in the middle of the MLB Power Rankings since I began producing them for 2019.

From June 1 (15th), through June 15 (14th) and on to July 1, when they ranked in the #18 slot the last time around, the rankings have not revealed much movement at all.
The Phillies currently sit in the #16 spot, buoyed by their defensive play, which ranks fourth in all of baseball. With a middling (15th) offense, what is truly weighing the club down and keeping them from seriously competing is their 25th ranked pitching staff.
As always, my own personal feelings have nothing to do with the MLB Power Rankings published here at Phillies Nation. Instead, the rank is all about actual results and statistical performances.
There is never any subjectivity on my part. I always take key statistics and rank each of the 30 teams in Major League baseball on their ability to actually win ball games as well as their performance on offense, on the pitching mound, and in the field.
The MLB Power Rankings are going to be updated at Phillies Nation on roughly the 1st and 15th of the month for the remainder of the regular season using the following methodology.

Introduced and then upgraded during the course of last season, my formula for compiling the rankings is always being researched to see if it can be improved upon. That formula carries two categories over from the 2018 season: winning percentage and OPS against. The first is simple, reflecting each team’s ability to actually win ball games. The second reflects a pitching staff’s ability to control damage.
As of my first ranking in this 2019 season, runs-per-game replaced simple “runs scored” in order to get the offensive component. This acknowledged the fact that teams play various numbers of games as of the time of each ranking. It wouldn’t be fair to consider a club that had scored 100 runs over 50 games as effective as a club who scored 100 runs over just 45 games.
There has now been a new update to the methodology. The new defensive metric will be the “Defensive runs saved” as measured at Fangraphs, replacing simple “fielding percentage” to gauge a team’s defensive competence.
I then assign each of those component category team rankings a 1-30 numerical value and simply add those values up to determine an overall final ratings score. Where there was a tie, it is broken by win-loss percentage, then by runs-per-game, followed by pitching OPS.

The new team at the top of the rankings are the Minnesota Twins, who were my Spotlight Team accompanying the June 1 rankings piece. The Twins are MLB’s surprise team this season. Many predicted they would be a playoff contender. I had them finishing second in the AL Central Division in my own 2019 MLB preview and predictions back in late March.
The hot risers are the Cleveland Indians, who have moved into a tie for an AL Wildcard playoff slot, and the Los Angeles Angels, who have rallied together in the wake of the tragic sudden death of starting pitcher Tyler Skaggs to win seven of their last 10 games to move back over the .500 mark.
On the down side, the Colorado Rockies have lost nine of 11, fallen below the .500 mark, and plummeted eight spots in the rankings from the start of July. The Milwaukee Brewers have lost eight of 10 to drop out of first place in the NL Central. The Brew Crew also have slipped in every one of my Power Rankings, a troubling sign for a team still sitting in contention for both that division crown and an NL Wildcard berth.
In parentheses are the team’s positions from the June 1, June 15 and July 1 rankings, shown in that order from left to right.

Previous spotlight teams: Minnesota (6/1), Atlanta (6/15), Texas (7/1)
The Oakland Athletics are currently tied for the second American League Wildcard playoff berth with a 53-41 record, and are five games behind the first-place Houston Astros in the AL West Division race.
After three straight last place finishes, the A’s rose to become a 97-win team a year ago. They were bounced out of the AL Wildcard Game by the New York Yankees in a 7-2 defeat in the Bronx. 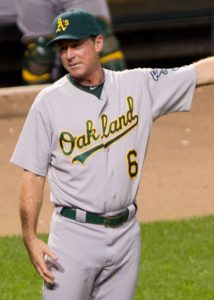 Bob Melvin has been at the helm in Oakland since the 2011 season.(Keith Allison)
Managed by Bob Melvin, now in his ninth season at the helm (687-640), the A’s are a team without a true weakness. They show up at 4th in my pitching category, 6th on defense, and as the 10th-ranked offensive attack. It all adds up to the 8th-best record in Major League Baseball and their current playoff contending status.
The A’s offensive attack is led by one of the top young stars in the game today, Matt Chapman. The 26-year-old third baseman made his first AL All-Star team this year after finishing 7th in AL MVP voting a year ago during a season in which he won a Gold Glove at the hot corner.
Other key players are 24-year-old center fielder Ramon Laureano, 25-year-old first baseman Matt Olson, 28-year-old shortstop Marcus Semien, and veteran DH Khris Davis.
On the mound, 34-year-old veteran right-hander Mike Fiers tossed his second career no-hitter earlier this season and is having a strong overall year. Righty Chris Bassitt and lefty Brett Anderson have also been solid in a rotation that could get better in September with the return of talented 26-year-old right-hander Frankie Montas. He was lost to an 80-game PED suspension.
Liam Hendricks has taken over the closer role from Blake Treinen and proven lights out with a 1.21 ERA, 2.06 FIP, 1.000 WHIP and 35 hits allowed over 52 innings across 44 games. He has registered a half-dozen saves in the game-end role with a 65/17 K:BB ratio. A trio of veterans in right-handers Joakim Soria and Yusmeiro Petit and southpaw Ryan Buchter have been strong in setup roles.
The A’s are typically little known by many baseball fans. But team president Billy Beane of “Moneyball” fame has helped the organization put together another legitimate playoff contender on the cheap. They will be a difficult out for any opponent in a one-game Wildcard match-up, should they get there again.
Originally published at Phillies Nation as “2019 MLB Power Ranking: July 15“