Todd Frazier got tossed after getting hit by Jake Arrieta

The New York Mets (40-49) held on for a tense 6-5 victory over the division-rival Philadelphia Phillies (46-43) on Saturday night at Citi Field. The two teams will meet in the series rubber match on Sunday afternoon in what will be the final game before the four-day MLB All-Star Game break.

In a nationally televised game delayed for 40 minutes at the outset thanks to thunderstorms in the area, neither starting pitcher looked good in this one. Jake Arrieta was simply awful on the mound for the Phillies, only getting into the 5th inning thanks to some poor Mets base running and their failure to cash in on early opportunities.
Noah Syndergaard continued to show that his 2019 version may still look like ‘Thor’, but he is not overpowering anyone with the thunder bolts from his right arm.
The two pitchers allowed 10 runs through the first five innings. Syndergaard was touched for a pair of home runs in the top of the 2nd, a blast to right by Jay Bruce and another to left off the bat of Maikel Franco. 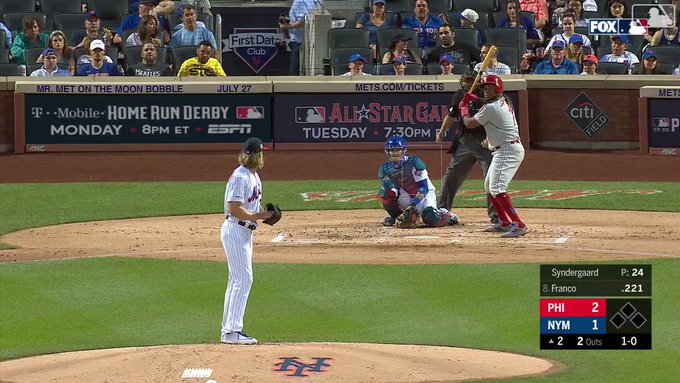 Phillies Nation@PhilliesNation
Maik drove one out to deep LF for Phils second HR of the 2nd inning.

See Phillies Nation’s other Tweets
Twitter Ads info and privacy
Things got a bit testy in the bottom of the 5th, and then the Mets finally cashed in against Arrieta, who had dodged trouble a couple of times. The Phillies righty hit Mets third baseman Todd Frazier with one out. Frazier took offense, barking at Arrieta the entire way down to first base as home plate umpire Tripp Gibson warned both benches.
That brought Mets skipper Mickey Callaway out to argue, wondering why his club was being warned when it was Arrieta who had hit the only two batters during the contest. Frazier turned his barking towards the ump, and was ejected.
Dominic Smith then doubled, and Arrieta followed that by hitting Amed Rosario. Despite the previous warning, Arrieta was allowed to stay in the game, which may have been a blessing for the Mets as Tomas Nido cleared the bases with a double, pushing the Mets in front by 6-4. 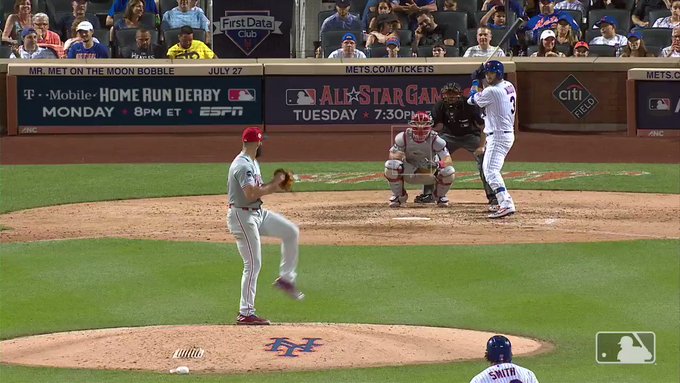 Phillies Nation@PhilliesNation
The big blow would prove to be this bases-clearing double by Mets catcher Tomas Nido in the bottom of the 5th inning.

See Phillies Nation’s other Tweets
Twitter Ads info and privacy
That was all for Arrieta, as manager Gabe Kapler finally pulled the plug and went to Edgar Garcia out of his bullpen. Over the final 3.2 innings, Garcia, Ranger Suarez, and J.D. Hammer shut the Mets down by allowing just one hit and one walk.
The Phillies got within a run in the top of the 7th when Segura was hit by a pitch with one out (again resulting in no ejection following the earlier warning) and Bryce Harper singled. That brought J.T. Realmuto to the plate, and the Phillies lone rep to the 2019 MLB All-Star Game delivered with an RBI single to make it a 6-5 ball game.
The game’s biggest moment came in the top of the 8th inning. Steven Matz allowed a leadoff single to Cesar Hernandez, prompting Callaway to bring in Seth Lugo. The righty reliever immediately surrendered a base hit to Franco, moving the tying run into scoring position with nobody out. But Lugo bore down to retire the next three batters, striking out both Scott Kingery and Jean Segura  to end the threat.
In the top of the 9th, Realmuto kept the Phillies alive by singling with two outs off Mets closer Edwin Diaz. The Phillies backstop then swiped second base to put himself into scoring position as the potential game-tying run. But Diaz blazed a fastball that got Jay Bruce swinging to end it, nailing down the victory for the home crowd and earning his 19th Save of the season. 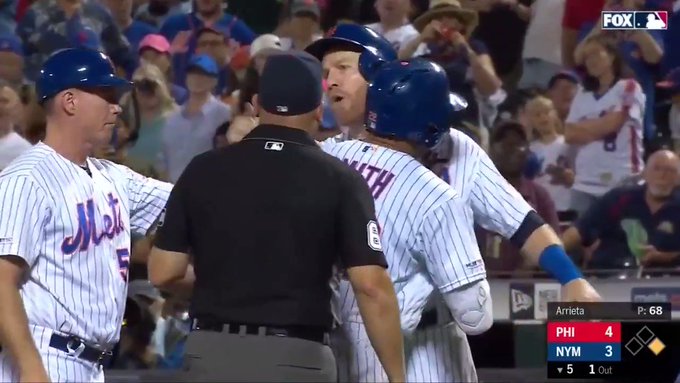 Phillies Nation@PhilliesNation
Arrieta postgame: “Frazier’s not happy about it, he can come see me. I’ll put a dent in his skull.”

Jeff McNeil continued to kill the Phillies by delivering a four-hit game. But, Nido, the Mets backup catcher playing tonight in place of starter Wilson Ramos, had two hits. His three-run double provided the winning margin in the bottom of the 5th inning.